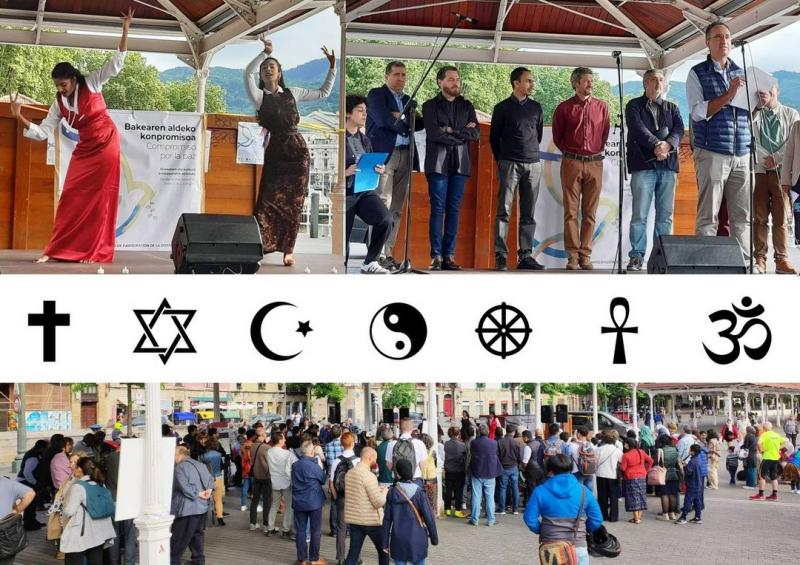 On May 28, 2022, DEIA, a daily newspaper in Basque Country, an autonomous community in Northern Spain, published a story about an "inter-religious celebration" that included "prayers," "songs," and statements about "peace" and "love." The DEIA newspaper reported on the ecumenical event as follows:"The event began at 7:00 p.m. with a Buddhist dance for peace … after which the moment called for peace … an inter-religious celebration was held with the participation of children and youth from the different religious communities, a prayer, symbol, characteristic song of each confession was performed, around peace, love … The event was attended by representatives of the Catholic Church, the Ukrainian Greek-Catholic community, the Evangelical Council of Euskadi, the Evangelical Church of Philadelphia, the Adventist Church, the Assalam Mosque, the Bader Mosque, the Al Furkan Mosque, the Rekalde Mosque, the Mourides Brotherhood, the Church of Jesus Christ of Latter Day Saints, the Baha'i Community, the Buddhist Community and the Taoist Community. This Forum has the collaboration of the Pedro Arrupe Human Rights Institute of the University of Deusto and the Ignacio Ellacuria Social Foundation." This ecumenical peace event was organized in collaboration with two prominent Jesuit organizations in Spain. The first was the Pedro Arrupe Human Rights Institute at the University of Deusto. Pedro Arrupe was the 28th Superior General of the Jesuit Order. What business does any Seventh-day Adventist have to do with an organization dedicated to the black pope, a Jesuit superior general? The Ignacio Ellacuria Social Foundation was the second group that helped to sponsor this interfaith gathering. This is another Jesuit institution named after Ignacio Ellacuria. He was one of six Jesuit priests killed in El Salvador during the Civil War. This foundation's mission is to "build an intercultural, inclusive society through diverse exercises that increase encounter, reflection, dialogue, and transformation of the host society with an openness to cultural diversity and religious pluralism."Rome's invitation to join their Jesuit-led universal fraternity is a very well-conceived and very well-executed plan for our conversion. They are turning truth into relativism. It is a forum where all views, except biblical truth, are celebrated. It makes you indifferent to other religions. Its objective is to overthrow our faith. It doesn't ask Rome to change because Rome never changes. It is changing Adventism. It is very easy to blend in with the world; but standing up to the prevailing apostasy is always more difficult. Nonetheless, this is the challenge we face today. This generation must be called to repentance and turned to the living God. In these last days, the faithful company of believers who are not compromising their faith will be committed to preparing a people for the coming of the Lord.Click to see all the images and to read the full story: http://adventmessenger.org/seventh-day-adventists-in-spain-join-the-jesuits-in-an-ecumenical-event-called-commitment-for-peace/Contact: Andy Roman, Publisher Address: Advent Messenger, PO Box 96, Dover, OK 73734 Phone: (888) 299-2119 Website: www.adventmessenger.org Email: adventmessengers@gmail.comAbout: Advent Messenger provides news and commentary on current events, top stories, social trends and political and religious events. For more news visit www.adventmessenger.org

06-23-2022 | Leisure, Entertainment, Miscel …
Advent Messenger
HopeMedia: "The Adventist Church in Solidarity with the Ukrainian Catholic Churc …
Hope Media is the official news agency of the Seventh-day Adventist Church in Italy. A March 15, 2022 headline from HopeMedia reads: "The Adventist Church in Solidarity with the Ukrainian Catholic Church." To stand in solidarity with someone, as in the case of Catholicism, means to be in "unity or agreement of feeling or action, especially among individuals with a common interest." One can certainly express regret for the suffering
06-23-2022 | Leisure, Entertainment, Miscel …
Advent Messenger
Loma Linda University Promotes the Ancient Eastern Meditation Arts of "Sunset Yo …
The following message was posted on Loma Linda University's Instagram page: "What a FUN event! People were lined up to participate in the Fitness Frenzy Sunset Yoga on April 13." Seventh-day Adventist institutions should be much more cautious when it comes to promoting eastern meditations on their social media pages or allowing them on their campus. Many Christians today regard yoga as merely another form of exercise, but it is
06-23-2022 | Leisure, Entertainment, Miscel …
Advent Messenger
The Elizabethton Star in Tennessee published the following headline: "Sunday is …
The Elizabethton Star is a secular newspaper in Tennessee that has been in circulation since 1926. They have both a print edition and an online edition. On May 9, 2022, the Elizabethton Star published an article titled "Sunday is the Lord's Day." It went on to feature a quote from the late Billy Graham emphasizing the significance of keeping Sunday holy. Notice what they said: "How wonderful it would be to
06-23-2022 | Leisure, Entertainment, Miscel …
Advent Messenger
Sunday will be a Day of Rest in the Muslim State of Johor in Malaysia
The world is lining up and adjusting to the new economy, which will recognize Sunday as a day of rest for everyone. In Johor, Malaysia, Islam is the official religion. For many years, Friday and Saturday were their days of rest. They now intend to include Sunday as one of their work-free rest days. This shift follows the current popular trend of incorporating a four-day work week to give employees

01-26-2021 | Leisure, Entertainment, Miscel …
Advent Messenger
Jesuit Priest Invokes Pope Francis During Presidential Inauguration as Joe Biden …
As Joe Biden was inaugurated as the 46th President of the United States, Jesuit priest Leo O’Donovan, former president of Georgetown Jesuit University, offered a prayer for Joe Biden and for our nation. Jesuit priest O’Donovan invoked Pope Francis while praying on the steps of the United States Capitol, a first in the history of presidential inaugurations. So today we had a Jesuit priest in America invoking a Jesuit pope
05-14-2020 | Science & Education
Pine Manor College
PINE MANOR COLLEGE AND BOSTON COLLEGE ANNOUNCE INSTITUTIONAL AGREEMENT
CHESTNUT HILL, Mass. (5-13-20)-Pine Manor College and Boston College have signed a Memorandum of Understanding (MOU) that will integrate the two institutions in a common mission to serve underrepresented, first-generation, low-income students. Under the agreement, Brookline-based Pine Manor College, renowned for serving underrepresented populations, will join forces with Boston College, a Jesuit, Catholic university with longstanding success in educating immigrant and first-generation students, in an educational partnership of mutual benefit
10-23-2012 | Sports
Fordham University Athletics
Patrick Ewing To Receive Inaugural Johnny Bach Award At Fordham University Tip O …
Patrick Ewing will receive the inaugural Johnny Bach Award from Fordham University at the Men’s Basketball Tip-Off Dinner on Monday night, November 5, at the Grand Hyatt Hotel (Park Avenue at Grand Central) in New York. John W. Bach, FCRH ’48, a coaching icon on the collegiate, professional, and international levels, is one of the greatest basketball minds of all time. A defensive specialist, he has been credited with helping the
04-13-2012 | Media & Telecommunications
WFUV-FM
Chris Isaak, Al Michaels, Christiane Amanpour, Michael Dorf To Be Honored at WFU …
A remarkable trio of music, news and sports broadcasting legends and a philanthropic community leader will be honored on Thursday night, May 10, at WFUV Radio’s Fifth Annual Spring Gala 2012 at Gotham Hall (1356 Broadway) in New York City. Charismatic singer-songwriter Chris Isaak will be feted as WFUV’s “Artist of the Year” and receive the WFUV Sound & Vision Award; Christiane Amanpour, renowned global affairs anchor for ABC News,
09-26-2011 | Leisure, Entertainment, Miscel …
CERTIFIED COOLNESS Limited
6400 heroes worldwide make the Oktoberfest in Munich carbon neutral
The Oktoberfest 2011 will be carbon neutral. 6,400 volunteers worldwide will make this possible by going on the Low Carbon Diet. “Climate and environmental protection must be fun, easy, and cool! This campaign shows how,” says Izai Amorim, also known as Mr. Cool Ness, the campaign’s initiator. The Oktoberfest is held annually in Munich from late September to the first weekend in October. In 2011 it will run from September 17th
10-08-2007 | Politics, Law & Society
Thompson & Knight
Thompson & Knight Attorney Named Chairman of the Board of Dallas Heritage Villag …
Dallas (October 5, 2007) – Thompson & Knight LLP is pleased to announce James B. Harris has been named Chairman of the Board of Dallas Heritage Village. His one-year term began at the Village’s annual meeting on September 27, 2007. Harris is a Partner in the Firm’s Dallas office who focuses his practice on regulatory litigation and counseling, including environmental matters. Harris\' environmental litigation expertise includes cost-recovery actions, enforcement actions,
Comments about openPR
OpenPR ist the nicest and most clearly laid out PR platform I have seen to this day. The press releases are displayed very nicely and clearly and without any unnecessary frills. The updates are fast and the finished release looks appealing and is clearly legible. Even with 16 years of experience one discovers new things from time to time. Congratulations!
Gabriele Ketterl, Director Marketing & PR, Menads