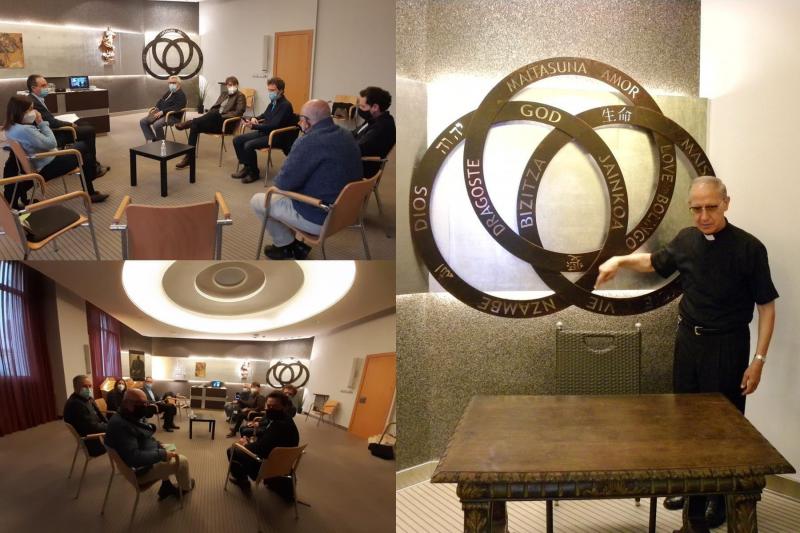 Jesuits in Spain have joined Seventh-day Adventists and other religions in a series of interfaith engagements that will take place every three months. The first round of meetings for the “New Inter-religious Space” already took place on March 5, 2021 in the “Arrupe Extea Chapel,” a Jesuit chapel named after Pedro Arrupe, the 28th Superior General of the Jesuits (Black Pope). Participants in these new quarterly ecumenical gatherings include Jesuits, Seventh-day Adventists, Evangelicals, Atheists, Mormons, Muslims, and Baha’is. This news was published by the Ignacio Ellacuría Social Foundation, a Jesuit-run organization named after the Jesuit priest Ignacio Ellacuría. What is also of interest is that the Ignacio Ellacuría Social Foundation, an organization affiliated with the Society of Jesus and the Society of Mary, has an ecumenical initiative called “DIAR” that promotes dialogue, relationships, acceptance and respect among all religions. The Ignacio Ellacuría Social Foundation also has a “TOWER OF BABEL” initiative that promotes “a safe space for self-sufficiency, collective and individual empowerment, social participation, joint responsibility and claim”.The Jesuits are pushing these ecumenical “Tower of Babel” safe spaces. There are no “safe spaces” when it comes to Jesuits. Whenever the flock of God enters interfaith communion with the Jesuits, they must understand that they are entering a den of ravenous wolves. Instead of defending the flock, many of our Seventh-day Adventist leaders are leading the flock to the slaughterhouse. God has NOT given us a message in this final hour of earth’s history to enter Rome’s Tower of Babel. Do we no longer have Protestants in charge of the work?Click to see the pictures and to read the full story: http://adventmessenger.org/jesuits-have-joined-seventh-day-adventists-to-create-new-interfaith-spaces-to-connect-four-times-a-year-in-spain/Contact: Andy Roman, Publisher Address: Advent Messenger, PO Box 96, Dover, OK 73734 Phone: (888) 299-2119 Website: www.adventmessenger.org Email: adventmessengers@gmail.comAbout: Advent Messenger provides news and commentary on current events, top stories, social trends and political and religious events. For more news visit www.adventmessenger.org

01-26-2021 | Leisure, Entertainment, Miscel …
Advent Messenger
Jesuit Priest Invokes Pope Francis During Presidential Inauguration as Joe Biden …
As Joe Biden was inaugurated as the 46th President of the United States, Jesuit priest Leo O’Donovan, former president of Georgetown Jesuit University, offered a prayer for Joe Biden and for our nation. Jesuit priest O’Donovan invoked Pope Francis while praying on the steps of the United States Capitol, a first in the history of presidential inaugurations. So today we had a Jesuit priest in America invoking a Jesuit pope
05-14-2020 | Science & Education
Pine Manor College
PINE MANOR COLLEGE AND BOSTON COLLEGE ANNOUNCE INSTITUTIONAL AGREEMENT
CHESTNUT HILL, Mass. (5-13-20)-Pine Manor College and Boston College have signed a Memorandum of Understanding (MOU) that will integrate the two institutions in a common mission to serve underrepresented, first-generation, low-income students. Under the agreement, Brookline-based Pine Manor College, renowned for serving underrepresented populations, will join forces with Boston College, a Jesuit, Catholic university with longstanding success in educating immigrant and first-generation students, in an educational partnership of mutual benefit
10-23-2012 | Sports
Fordham University Athletics
Patrick Ewing To Receive Inaugural Johnny Bach Award At Fordham University Tip O …
Patrick Ewing will receive the inaugural Johnny Bach Award from Fordham University at the Men’s Basketball Tip-Off Dinner on Monday night, November 5, at the Grand Hyatt Hotel (Park Avenue at Grand Central) in New York. John W. Bach, FCRH ’48, a coaching icon on the collegiate, professional, and international levels, is one of the greatest basketball minds of all time. A defensive specialist, he has been credited with helping the
04-13-2012 | Media & Telecommunications
WFUV-FM
Chris Isaak, Al Michaels, Christiane Amanpour, Michael Dorf To Be Honored at WFU …
A remarkable trio of music, news and sports broadcasting legends and a philanthropic community leader will be honored on Thursday night, May 10, at WFUV Radio’s Fifth Annual Spring Gala 2012 at Gotham Hall (1356 Broadway) in New York City. Charismatic singer-songwriter Chris Isaak will be feted as WFUV’s “Artist of the Year” and receive the WFUV Sound & Vision Award; Christiane Amanpour, renowned global affairs anchor for ABC News,
09-26-2011 | Leisure, Entertainment, Miscel …
CERTIFIED COOLNESS Limited
6400 heroes worldwide make the Oktoberfest in Munich carbon neutral
The Oktoberfest 2011 will be carbon neutral. 6,400 volunteers worldwide will make this possible by going on the Low Carbon Diet. “Climate and environmental protection must be fun, easy, and cool! This campaign shows how,” says Izai Amorim, also known as Mr. Cool Ness, the campaign’s initiator. The Oktoberfest is held annually in Munich from late September to the first weekend in October. In 2011 it will run from September 17th
10-08-2007 | Politics, Law & Society
Thompson & Knight
Thompson & Knight Attorney Named Chairman of the Board of Dallas Heritage Villag …
Dallas (October 5, 2007) – Thompson & Knight LLP is pleased to announce James B. Harris has been named Chairman of the Board of Dallas Heritage Village. His one-year term began at the Village’s annual meeting on September 27, 2007. Harris is a Partner in the Firm’s Dallas office who focuses his practice on regulatory litigation and counseling, including environmental matters. Harris\' environmental litigation expertise includes cost-recovery actions, enforcement actions,
Comments about openPR
OpenPR is clearly structured and remains true to its principle of confining itself to the essential parts. OpenPR has proven to be a very good and reliable partner to our media agency: Within the shortest time the releases are online and go down well with the media representatives. The success of OpenPR is reflected in the steadily increasing number of press releases. It is good that OpenPR exists!
Ursula Koslik, Director Marketing & PR, F+W Hamburg