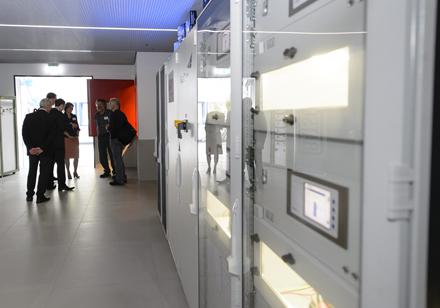 Beginning of June, TÜV Rheinland LGA Products GmbH has opened a new battery test laboratory in Nuremberg, Germany equipped with FuelCon testing system. During the ceremony, opened by Managing Director Dipl.-Ing. Jörg Mähler and Dr. Armin Rudolph of Bavarian State Ministry for Economic Affairs, Infrastructure, Transportation and Technology, the invited guests could view behind the scenes. Thereby, also the FuelCon Evaluator-B30 battery test station was introduced.Besides the Evaluator-B30 that contains several test chambers including temperature plate and pouch adapter for Li-Ionen pouch cells, the laboratory of TÜV Rheinland is also equipped with an own battery test place and a separate climate chamber. In addition, FuelCon has implemented its TrueData-MUX concept that enables controlling all three different test places by the Evaluator test station. Thus, the company has realized an innovative solution that provides most flexibility for various battery testing: While the Evaluator-B test chambers allow performance of life cycle tests under defined temperatures, the climate chamber provides executuion of stress tests with parallel running climate profiles, shaker profiles and load profiles. Finally, the third test place enables performance of abuse tests.Required safety for laboratory environment, test items and staff is assured through the test station safety concept including nitrogen inertization and control of gas concentration within the climate chamber. All data are measured and analyzed with FuelCon´s software TestWork. The software bases on a modern client-server-architecture and provides with its intuitive operation highest work comfort.About FuelCon:Consequently intelligent: that’s how we love solutions. FuelCon is the global leading supplier of test and diagnostic systems for fuel cells and batteries. For years, our name is recognized for innovative engineering and high quality, for highest safety standards and close consultation with our costumer.With our testing systems for fuel cells we offer optimal solutions for all typical technologies like PEM, DMFC, SOFC or MCFC in a power range between a few watts up to 150kW. In addition, innovative test systems for evaluating electrolyser are available. With the “Evaluator-B” series we have developed a concept that fulfils the challenging testing requirements of modern batteries with high accuracy and flexibility. The test systems enable the comparison, evaluation and optimization of battery cells and packs, as well as simulation of different requirements for customized applications.Aside the headquarters in Germany, FuelCon is with its subsidiary FuelCon Systems Inc. and several representatives active in Europe, North America and Asia.FuelCon AG Steinfeldstr. 1 D-39179 Magdeburg-Barleben T + 49 39203 514 400 F + 49 39203 514 409 www.fuelcon.com Press contact: Andrea Bartels

11-29-2017 | Industry, Real Estate & Constr …
FuelCon AG
Added value due to standard configuration – FuelCon test stations convince by …
Testing and validating fuel cells is a highly complex procedure, where many single steps need to intertwine in order to eventually supply reliable measuring data and results. In dependence on the respective technology, this means especially an extensive preparation of test runs, where the test item, the test station and the test procedure as such must be enabled and adjusted for the corresponding requirements. As an experienced manufacturer of test stations
11-08-2017 | Energy & Environment
FuelCon AG
FuelCon expands portfolio for EIS measurement
For many years, FuelCon provides test stations for fuel cells and batteries that are used as reliable test equipment for R&D, validation or quality assurance. An important and complementary diagnostic tool for fuel cell and battery testing is an electrochemical impedance spectrometer. For this application, FuelCon has the TrueData-EIS – a powerful solution for daily use that can be integrated into a test station or as stand-alone version. Depending on customer's
07-04-2017 | Energy & Environment
FuelCon AG
FuelCon provides powerful test equipment of the next generation for automotive t …
For many years, car manufactures around the world research and develop various concepts for a more efficient powertrain. In this process, the main goal is the reduction of global CO2 emissions. Besides the optimization of combustion engines, the focus is set on the establishment of alternative powertrain technologies in a serial production that work without fossil fuels. The global automotive industry stuck in an enduring conversion process that influences several aspects
04-20-2017 | Industry, Real Estate & Constr …
FuelCon AG
FuelCon provides globally latest test station for fuel cell systems
The development of alternative propulsion technologies for vehicles is a recurrent topic for many years. Besides the advanced market entrance of battery-powered electro mobiles, the integration of fuel cell systems as a propulsion technology also takes on greater significance. From now on, due to FuelCon test equipment, the development of new systems can happen even better and more efficient. For more than 15 years, FuelCon AG from Magdeburg-Barleben is specialized in