Actress Kirsten Dunst in the face of Marilyn Monroe 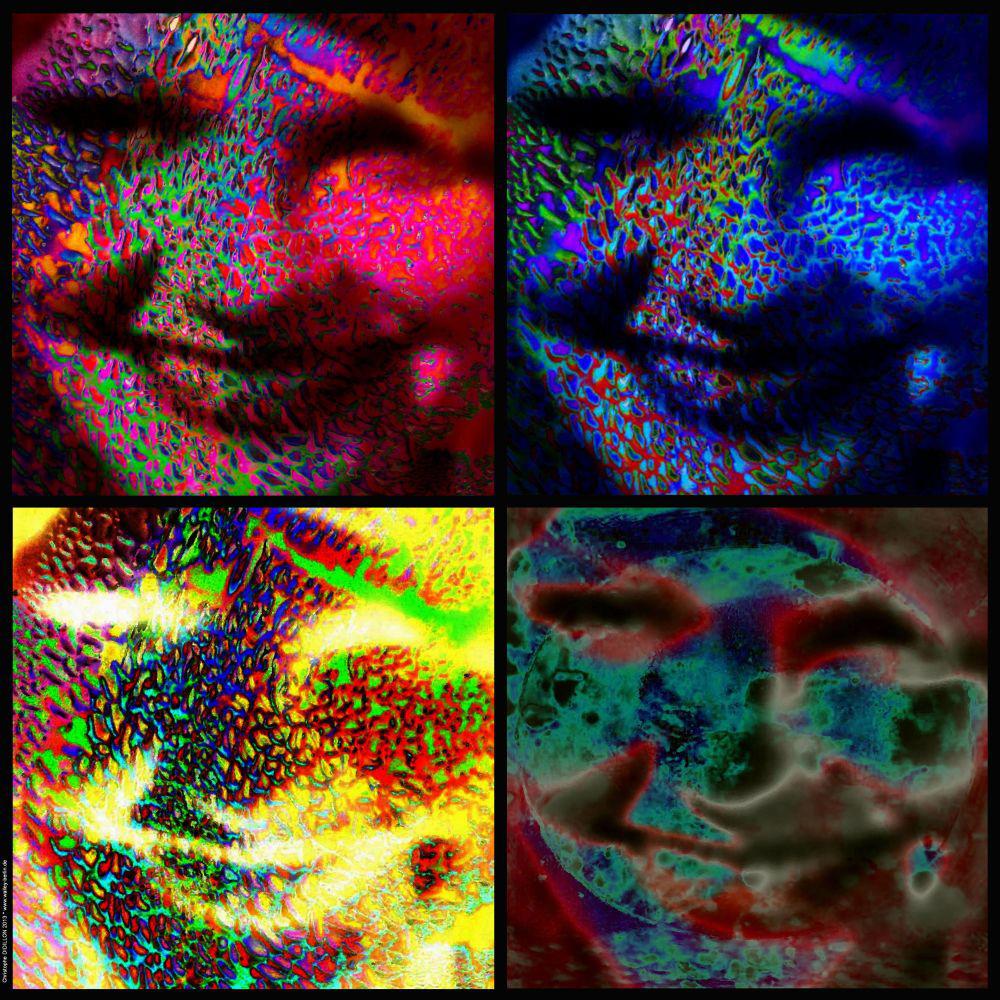 German Artist produces unique "Warhol collage" of Hollywood beauty:A German artist has discovered the Hollywood beauty as a motif for his art paintings. In memory of Marilyn Monroe and the famous artist Andy Warhol, Christophe Didillon manufactures (41) artistic pictures of Kirsten Dunst. The artists admires Kirsten and her engagement for people with depression. "I think Kirsten is a very brave lady. Like Marilyn Monroe and other important artists she suffered for some time of a severe depression. Kirsten is one of very few celebrities who have had the courage to confess to this very serious disease openly, and to bring about a social dialogue. Until the recent past, depression diesease were considered as personal weakness of individual people, anything but seriously taken by society – a great grievance against the diseased people; the more so as disease is very common. Countless people are dying of this disease, most of them unseen and quietly, but sometimes there are famous people becoming its victim, such as, for example, the German soccer star Robert Enke. I myself suffered severe depressive episodes in my own life, and a friend of mine, seemingly always cheerful, once shot himself with a hunting rifle. This came all of a sudden for me, I was absolutely blindsided. It happened without any warning or a sign, and without me anticipating it. So, I know how tricky and serious depressions are. Mostly, one doesn't recognize by just looking at people affected to that disease.I thank Kirsten very much for advocating for a more open discussion about and inclusion of depressive people in society. This is really brave and gives all of us a voice. And that is why I dedicate her an own picture series that perhaps recalls some people of Andy Warhol's „Marilyn Monroe“ series. However, my own style is quite different, and I don't want to measure with Andy Warhol. I have my own style, and Andy Warhol is unsurpassable, anyway! Moreover, my pictures aren't for sale. I just want to exhibit them in honor of Kirsten, and to help her sensitizing society for dealing with depressive people."The German artist will create further works from public domain (PD) pictures with the Hollywood beauty: "Kirsten is really a special person with an almost magical charisma, and she is very pretty. I especially love pictures with her, when she has her distinctive, smart look, while her hair is soaking wet and strictly combed back. This makes her looking so cool!", so the German artist.He dreams of making a real photo shooting with Kirsten Dunst, when she has a date at her hairdresser's. But he fears that his wish will remain probably unattainable, because he neither has the contacts nor the financial means to honour her any fee. Didillon very wishes that other prominent people will follow the lead of Kirsten Dunst, giving people with depression a voice, helping to sensitize society for their difficult situation.Christophe Didillon (* in 1971); the many-sided artist made his mark with his WALLEY BERLIN art project referring to the fall of the Berlin Wall. The “German, European and international artist of the present” makes among other things miniature models of the Berlin Wall, which he designs individually. He is convinced that individual freedom is the highest value of human social live. With his works, he appeals to the people, to fight always and resolved for freedom and democracy. If he does not paint, Didillon travels through the world, appears sometimes dressed up as a Spiderman on the film festival in Cannes and collects donation money for children suffering from cancer; sometimes he takes photos of the long hair of pretty women and converts the photos artistically with his PC.„ Shampoo Art“ calls the creative newcomer, who once donated Michael Gorbatchev a painting (cf. www.walley-berlin.de/meeting-mr-gorbatchev/ )., his newest art genre, for which he is constantly in search of ladies with nice hair which allow him to work with their hair. Didillon is also fighting for the rights of abused and ill-treated children: For the abolition of the penologic periods of limitation in matters pertaining to abuse and maltreatment of children, Didillon made a pilgrimage with a big wooden cross (1.50-metre length) from the German cities Wuppertal to Cologne to the cathedral in order to win signees for the petition of Norbert Denef for the abolition of the periods of limitation (cf. www.netzwerkb.org/petition/ ).Christophe Didillon, M.A. (WALLEY BERLIN) Eschenweg 1 D-26506 Norden / Germanydidillon-art@web.dewww.en.wikipedia.org/wiki/Christophe_Didillon www.facebook.com/didillon.art www.walley-berlin.de

03-01-2013 | Arts & Culture
DIDILLON-ART
Saatchi works now together with German artist Christophe Didillon
After his exhibitions in the "Kleiner Prinz" art gallery in Baden-Baden and the 24. "Maja and Friends" Art Salon in Berlin* in mid-February, the German artist Christophe Didillon ("WALLEY BERLIN"; 41) got the possibility to present his works in the Saatchi Gallery (see http://www.saatchionline.com/Didillon). For a long time, Saatchi has an excellent reputation within the London art scene and worldwide. "I'm very happy to present my works now together with the
11-29-2012 | Arts & Culture
DIDILLON-ART
"Hairy" movie with Kirsten Dunst – German artist Christophe Didillon looking f …
Multi-week exhibition at Kleiner Prinz art gallery in Baden-Baden, Germany Calling himself WALLEY BERLIN, the international artist Christophe Didillon (40) made his mark with artistic modells of the Berlin Wall. Currently, he is searching backers of his film project: "First of all I'm looking for supporters of my short film, who like my idea and who have the possibility to get in touch with Kirsten Dunst informing her about my idea. So
09-18-2012 | Politics, Law & Society
DIDILLON-ART
German artist Christophe Didillon donates US-President Obama vast portrait colla …
Head-high Portrait picture of US-President Barack Obama, made from thousands of single photos of car registration plates of all states in the USA Christophe Didillon (40) is a many-sided artist: if he does not paint, he travels through the world, appears sometimes dressed up as a Spiderman on the film festival in Cannes and collects donation money for children suffering from cancer; sometimes he takes photos of the long hair of

04-14-2020 | Media & Telecommunications
Olivia Jones Communications
Gary Kirsten Foundation teams up with CoachED to sponsor online courses for 300 …
The far-reaching implications of COVID-19 are still emerging, but it's clear that, in addition to the health concerns, this pandemic will have a long-lasting financial impact- particularly on the most vulnerable members of society. But in the midst of this crisis, community-minded organisations are coming together and finding innovative platforms that offer life-altering solutions for individuals. CoachED, the newly-launched online cricket coaching accreditation programme, is one such example having
05-08-2019 | Business, Economy, Finances, B …
Big Market Research
What's Driving The Tobacco Pipe Market Growth? Key Players Are: Missouri Meersch …
Tobacco pipe is a device specifically made to smoke tobacco. It comprises a chamber (the bowl) for the tobacco from which a thin hollow stem (shank) emerges, ending in a mouthpiece (the bit). Pipes can range from very simple machine-made briar models to highly prized hand-made artisanal implements made by renowned pipe makers, which are often very expensive collector’s items. Pipe smoking is the oldest known traditional form
02-04-2019 | Advertising, Media Consulting, …
AMA Research & Media LLP
Tobacco Pipe Market Demand and Competitive Analysis by Leading Manufacturers | B …
A new business intelligence report released by AMA with title "Tobacco Pipe Comprehensive Study by Type (Briar, Meerschaum, Corn Cob, Others), Material (Wood, Clay, Fiber, Other), End User (Men, Women) Players and Region - Global Market Outlook to 2024" has abilities to raise as the most significant market worldwide as it has remained playing a remarkable role in establishing progressive impacts on the universal economy. The Global Tobacco Pipe Market
08-23-2018 | Business, Economy, Finances, B …
Gen Market Insights
Tobacco Pipe Market 2018 Global Industry SWOT Analysis by Players - Brigham Pipe …
"Gen Market Insights" published latest research report on global Tobacco Pipe market status and forecast, categorizes the global Tobacco Pipe market size (value & volume) by key players, type, application, and region. This report focuses on the top players in North America, Europe, Asia-Pacific, South America, and Middle East & Africa. Global Tobacco Pipe Market 2018 covers a complete market structure across the world with the detailed analysis of major key
11-29-2012 | Arts & Culture
DIDILLON-ART
"Hairy" movie with Kirsten Dunst – German artist Christophe Didillon looking f …
Multi-week exhibition at Kleiner Prinz art gallery in Baden-Baden, Germany Calling himself WALLEY BERLIN, the international artist Christophe Didillon (40) made his mark with artistic modells of the Berlin Wall. Currently, he is searching backers of his film project: "First of all I'm looking for supporters of my short film, who like my idea and who have the possibility to get in touch with Kirsten Dunst informing her about my idea. So
08-16-2011 | Arts & Culture
South Bay Ballet
South Bay Ballet’s Kirsten Marshall Enters Ballet Magnificat! Trainee Program
On the heels of fellow dancers, Paul C. Kirk and Regina Park Suh, South Bay Ballet announces Kirsten Marshall has accepted a position with Ballet Magnificat!, the internationally recognized Christian ballet company founded by Kathy and Keith Thibodeaux. Marshall will join the Company’s trainee program this September and will begin intensive technical studies not only in the art of ballet, modern and conditioning, but also courses in anatomy, discipleship/Bible
Comments about openPR
9 o'clock: discuss press release with client, 10 o'clock: submit release to openPR, within the briefest possible time release is published and displayed in a prominent place on openPR.de. I am thrilled!
Zehra Spindler, Calypso Now! - Communication Agency