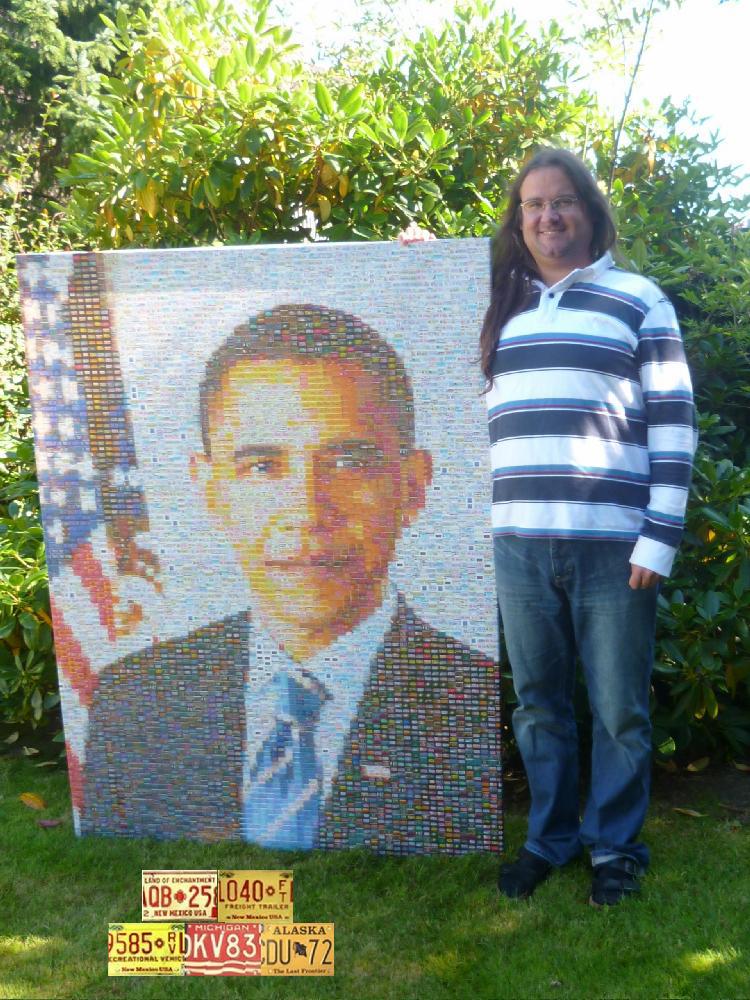 Head-high Portrait picture of US-President Barack Obama, made from thousands of single photos of car registration plates of all states in the USAChristophe Didillon (40) is a many-sided artist: if he does not paint, he travels through the world, appears sometimes dressed up as a Spiderman on the film festival in Cannes and collects donation money for children suffering from cancer; sometimes he takes photos of the long hair of pretty women and converts the photos artistically with his PC.„ Shampoo Art“ calls the creative newcomer, who already had exhibitions in the German federal presidential office and in the Hessian Parliament like in foreign museums and galleries, and who once donated crown princess Victoria of Sweden a painting, his newest art genre, for which he is constantly in search of ladies with nice hair which make to him their head available. Another concern to the artist is the extension of the child rights. For the abolition of the penologic periods of limitation in matters pertaining to abuse and maltreatment of children, Didillon made recently a pilgrimage with a big wooden cross (1.50-metre length) from the German cities Wuppertal to Cologne to the cathedral in order to win signees for the petition of Norbert Denef for the abolition of the periods of limitation (cf. http://netzwerkb.org/petition/).Now, the artist would like to do something for the re-election and victory of US-president Barack Obama. Therefore, the artist made in a work of many months a coloured photo collage with the portrait of the American president consisting of thousands of colourful single original photos from car license plates of all US states. Didillon: „I know that I can only present a small, friendly gesture with it in order to demonstrate to the voters in the USA how important Barack Obama's re-election in the White House is, and how much hope is connected with it for everybody of us - not only for the people in America, but also for us in Europe. Nevertheless, it should be clear to all of us: if the governmental power in the USA falls back in the hands of an ice-cold profiteer and winner at the expenses of weaker people, the devastating consequences will come to the people in Europe, too! Finally, the USA have always been the forerunner for many developments in Europe. Besides, it came to us quite intolerable enough. The politics must return to serve the people, not the unprincipled bosses in some dark back rooms of might!“Now, Christophe Didillon wrote a letter to the election campaign team of Barack Obama in the White House. He has offered his picture as a present to the US-president. „In case that you, dear Mr. President Obama, like my picture, I am very pleased to provide it to you as a present. In case that you don’t like my work, I keep it for myself, because I like it!“, the German photo artist wrote with a smile.Christophe Didillon (* in 1971); the many-sided artist made his mark with his WALLEY BERLIN art project referring to the fall of the Berlin Wall. The German, European and international artist of the present makes among other things miniature models of the Berlin Wall, which he designs individually. He is convinced that individual freedom is the highest value of human social live. With his works, he appeals to the people, to fight always and resolved for freedom and democracy. Didillon is also involved with the rights of abused and ill-treated children: thus, he supports the petition of Norbert Denef and the team from www.netzwerkb.org for the abolition of the periods of limitation, and he looks for other signers of this petition … (cf. http://netzwerkb.org/petition/).Christophe Didillon, M.A. (NEMO X! VOBIS) International Artist Eschenweg 1 D-26506 Norden / Germany didillon-art@web.de nemo.x.vobis@web.deYou receive further information on inquiry from Mr. Didillon (didillon-art@ web.de) or via Internet.You can find the detailed travel report to download, too:http://walley-berlin.de/app/download/5788945147/120830%2BPaul%2BDidillon%2BReisebericht%2BKreuzwanderung%2BWuppertal%25E2%2580%25A6.pdfFurther information:http://netzwerkb.org/petition/walley-berlin.de/kunst-gegen-pädophile/

08-26-2013 | Arts & Culture
DIDILLON-ART
Actress Kirsten Dunst in the face of Marilyn Monroe
German Artist produces unique "Warhol collage" of Hollywood beauty: A German artist has discovered the Hollywood beauty as a motif for his art paintings. In memory of Marilyn Monroe and the famous artist Andy Warhol, Christophe Didillon manufactures (41) artistic pictures of Kirsten Dunst. The artists admires Kirsten and her engagement for people with depression. "I think Kirsten is a very brave lady. Like Marilyn Monroe and other important artists she suffered
03-01-2013 | Arts & Culture
DIDILLON-ART
Saatchi works now together with German artist Christophe Didillon
After his exhibitions in the "Kleiner Prinz" art gallery in Baden-Baden and the 24. "Maja and Friends" Art Salon in Berlin* in mid-February, the German artist Christophe Didillon ("WALLEY BERLIN"; 41) got the possibility to present his works in the Saatchi Gallery (see http://www.saatchionline.com/Didillon). For a long time, Saatchi has an excellent reputation within the London art scene and worldwide. "I'm very happy to present my works now together with the
11-29-2012 | Arts & Culture
DIDILLON-ART
"Hairy" movie with Kirsten Dunst – German artist Christophe Didillon looking f …
Multi-week exhibition at Kleiner Prinz art gallery in Baden-Baden, Germany Calling himself WALLEY BERLIN, the international artist Christophe Didillon (40) made his mark with artistic modells of the Berlin Wall. Currently, he is searching backers of his film project: "First of all I'm looking for supporters of my short film, who like my idea and who have the possibility to get in touch with Kirsten Dunst informing her about my idea. So
09-16-2008 | Arts & Culture
DIDILLON-ART
Performance art touchs the hearts of Clooney and Pitt – Common donation for ch …
After his participation in the Film Festival in Cannes last May, the German performance artist and painter Christophe Didillon recently travelled to the Venice Film Festival (65. Mostra Internazionale d'Arte Cinematografica di Venezia). Again wearing a Spider-Man costume, the artist from Germany called attention to his art project to the benefit of children suffering from cancer. His action project just began with an adventure, so Didillon: When I came near