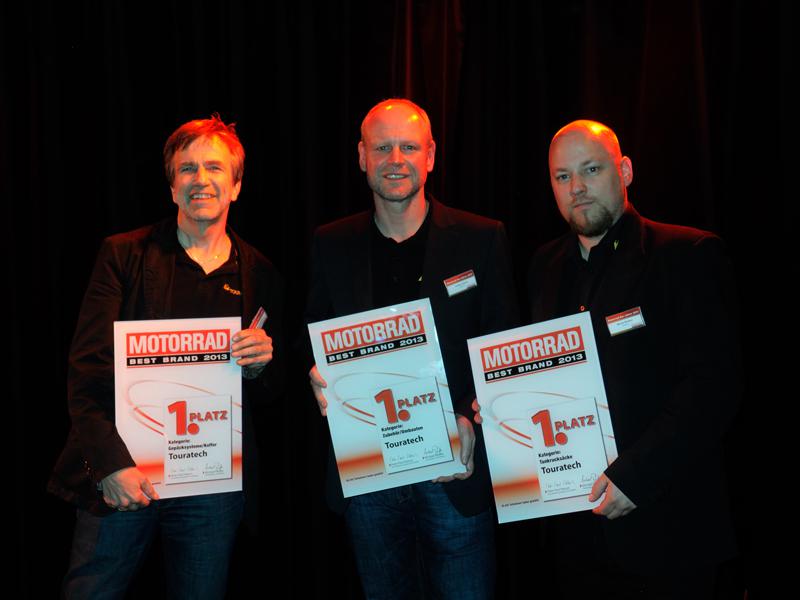 With three Best Brand awards for luggage / pannier systems, accessories /customizing and tank bags Touratech was the big winner in the 2013 “MOTORRAD” magazine’s Best Brand presentation. This unique result even exceeds last year’s success. Touratech is the first manufacturer to take a triple win in these three categories. Once a year, the readers of Europe’s biggest motorbike magazine vote for the best brands in the fields of motorbike accessories and clothing. Based on the results of the readers’ votes, the Best Brand Awards are granted. After two wins and a second place in 2012 Touratech has now also achieved first place in the tank bag category and finished on top of the podium three times. Touratech directors Herbert Schwarz and Jochen Schanz and Martin Wickert, head of sales, received the coveted awards at the Best Brand presentation in Stuttgart. According to Herbert Schwarz all Touratech employees have contributed to this huge success, which is a good example for quality made in Germany.Touratech visited most major national and international spring fairs and presented their novelties. For example, the Black Forest based company was the first manufacturer to launch a wide range of accessories for the new liquid cooled BMW R 1200 GS. This spring, Touratech will also present an optimized version of their well proven ZEGA Pro panniers called ZEGA Pro2.On Saturday, April 13th, Touratech will celebrate the start of the 2013 motorbike season with a season opening party at the Touratech headquarters in Niedereschach / South Germany.Touratech is the leading brand in aftermarket accessories for large touring and adventure motorcycles. Quality and innovative designs are the hallmarks of Touratech products. Adventure riders have relied on Touratech products to explore some of the most remote locations on Earth. The product range includes GPS navigation, luggage solutions, motorcycle protection, ergonomic upgrades and other adventure touring products. Touratech is represented in about 40 countries worldwide, the company’s headquarters are in Niedereschach / South Germany.Touratech AG Auf dem Zimmermann 7-9 DE 78078 NiedereschachPress contact: Margit Rowley Touratech AG Marketing/PR Tel.: +49 (0)7728/9279-160 e-mail: margit.rowley@touratech.de

02-15-2013 | Tourism, Cars, Traffic
Touratech AG
Brand New R 1200 GS: Touratech Presents Wide Accessory Range
Even long before its presentation the brand new BMW R 1200 GS has probably caused more excitement than any other motorbike ever. It’s the first R series bike to have a liquid-cooled boxer engine, and it has been upgraded with lots of technical innovations. And with it, BMW is opening a new chapter in this bike’s success story. The R 1200 GS is not only BMW’s best selling motorbike, but

11-30-2020 | Business, Economy, Finances, B …
NSKT Global
What is Brand Sentiment analysis?
Brand sentiment analysis is a process to determine the feedback and attitude towards your brand, service or product. Why is brand sentiment important? Informed decisions could be made when knowing your brand sentiment which helps your business in improving. We will showcase some aspects where sentiment analysis would be beneficial: 1. Brand customer reviews Twitter and Facebook, the popular social media platform is filled with ratings on various brands, people, topics, products and also
02-06-2018 | Business, Economy, Finances, B …
Allen Maintenance Inc.
Commercial Cleaning Brand Building Experts
Learning to rely on a reliable brand for commercial cleaning requires trust. Allen Maintenance Corporation has been rendering quality commercial cleaning and building maintenance to commercial enterprises throughout the Eastern District of Michigan, for more than 28 years. During that timeline, business relationships have enabled, Allen Maintenance Corporation, to establish its commercial cleaning brand as a subject matter expert. After all, Allen Maintenance Corporation, provides removal of trash, sweeping, vacuuming, and mopping.
04-06-2011 | Arts & Culture
Military Plaques
MilitaryPlaques.Com Brand New Website
Indianapolis--On February 2011 launched a new website for MilitaryPlaques.COM, an online merchant of mahogany wood products. The new site is programmed, conceptualized and designed for easier and more secure online shopping. With the use of the most advance e-commerce sofrware platform and Content Management System CMS, MilitaryPlaques.Com has able to develop a website that responds to customers' demand for an easier user interface shopping cart. The new website homepage is designed to
11-03-2010 | Politics, Law & Society
The Presidential Council on Nation Branding of Korea
Conference on Korea’s Nation Brand
Participants engaged in a vital discussion on the impact of the upcoming G20 Seoul Summit and North Korea’s leadership succession on South Korea’s nation brand - The Presidential Council on Nation Branding (Chairwoman: Lee Bae-Yong) hosted a Conference on Korea’s Nation Brand on Wednesday, October 27 from 14:00 to 17:00 at the Convention Hall of the Grand Hilton Seoul. Discussions were held on the impact of the upcoming G20 Seoul Summit
10-17-2007 | Arts & Culture
Agora Gallery
Sea Scapes by Bruce Brand
Scheduled to run from October 26 through November 15, 2007 Opening Reception: Thursday, November 1, 2007, 6-8 pm Gallery Location: 530 West 25th Street, Chelsea, New York 10001 The public is invited to participate in the event Bruce Brand's art has always been about inner struggle and a search for understanding and peace. In the 1960s his work was created out of anger, confusion, and disillusionment against the backdrop of the war in Vietnam.
11-22-2006 | Advertising, Media Consulting, …
Zarkin and Partners
Brand Becomes a Hit
‘Brand becomes a hit’ – this was the title of round-table discussion in the context of ‘PeterFood’ exhibition (Saint-Petersburg, Russia) which was held on 8 of November. The event’s organizers invited the founder of the branding agency ‘Zarkin and Partners’ Gene Zarkin who shared the secrets of successful brand development. ‘PeterFood’ is the largest food exhibition in the North-West region of Russia which has been held annually for 15 years.
Comments about openPR
OpenPR ist the nicest and most clearly laid out PR platform I have seen to this day. The press releases are displayed very nicely and clearly and without any unnecessary frills. The updates are fast and the finished release looks appealing and is clearly legible. Even with 16 years of experience one discovers new things from time to time. Congratulations!
Gabriele Ketterl, Director Marketing & PR, Menads