Asian countries speed up their uptake of EUREPGAP 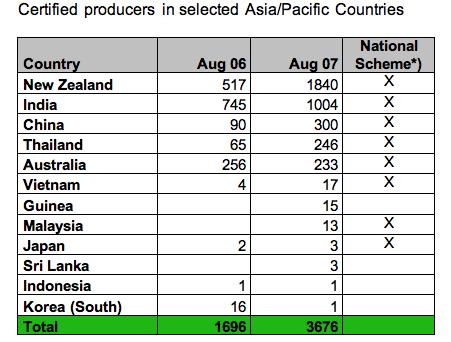 *) Not included in number, since mostly in development

The total number of certified producers have more than doubled, over the last 12 month period. Acknowledging this EUREPGAP has organized its annual event in Bangkok on 6th and 7th September 2007. Expert speakers from more than 13 countries will share their views and experience in setting up farm assurance certification in Asia.Kristian Moeller, Secretary EUREPGAP, said “Although Asia/Pacific shares just 5% of all world-wide EUREPGAP certificates, we are seeing a very high growth rate in Asia . Asia is rapidly catching up, especially due to the number of initiatives to build national schemes for Good Agricultural Practice, such as ThaiGAP, MalaysiaGAP, ChinaGAP and JGAP (Japan) which will be referenced directly (benchmarked) to the EUREPGAP global standard.“The plenary day (7th September) of the 8th EUREPGAP Conference will be opened by the Thai Deputy Prime Minister Kosit Punpienmrat. Delegates will learn how smallscale farmers are organising to obtain certification as well as hear the requirements of international and local retailers. The major theme of the event is how to “Think Global but Act Local”. Regional industry leaders and public officials will explain how to benefit from a globally harmonized GAP standard through the establishment of EUREPGAP multistakeholder National Technical Work Groups.”Timing and location are perfect for this year`s event, in a region where the public and private sectors are working together to plan and implement Good Agricultural Practices for both export and local markets,“ said Nigel Garbutt, Chairman of EUREPGAP.At the conference we will also begin to finalise the consultation process for the EUREPGAP Shrimp standard with a specially convened one day workshop for key stakeholders. The shrimp standard is expected to be available for certification by the end of this year.The Conference Programme and online registration is available at the special event website www.eurepgap2007.org.EUREPGAP Asia Conference 6/7 September 2007 BANGKOK, ThailandClaudia Meifert public relations /website administrator EUREPGAP c/o FoodPLUS GmbH, Spichernstr. 55, 50672 Koeln, Germany Koeln HRB 35211, Managing Director Dr. Kristian Moeller Tel: +49 (0) 2 21-5 79 93-82; Fax: -89EurepGAP started in 1997 as an initiative by retailers belonging to the Euro-Retailer Produce Working Group (EUREP). British retailers in conjunction with supermarkets in continental Europe were the driving forces. They reacted on growing concerns by the consumers with product safety, environmental and labor standards and decided to take more responsibility for what happened in the supply chain. On the other side the development of common certification standards were also in the interest of many producers. Those with contractual relations to several retailers complained that they had to undergo multiple audits against different criteria every year. On this background EUREP started to work on harmonized standards and procedures for the development of Good Agricultural Practices (GAP) in conventional agriculture. EurepGAP is one of the very few globally operating standardisation organizations that enjoy a high level of political and financial independence from the public sector as well as from individual member influence and shareholder agendas. To keep its independence EurepGAP does not conduct the certification process itself. Farmers or farmer groups can only be certified against the EurepGAP criteria by authorized Certification Bodies (CB). A EurepGAP Certification Body is a company fulfilling the requirements for approved EurepGAP CBs to grant EurepGAP certification in the relevant product scope. Currently EurepGAP is working with over 100 CBs in more than 70 countries. As many other on-farm quality assurance systems have been in place for some time prior to the existence of EurepGAP, a way had to be found to encourage the development of regionally adjusted integrated crop management systems and so to prevent farmers from expensive multiple audits. Existing national or regional quality assurance schemes that have successfully completed their benchmarking process are recognized as equivalent to EurepGAP. EurepGAP members include retailers, producers/farmers and associate members from the input and service side of agriculture. Governance is by a Board which is chaired by an independent Chairperson. The Board also agrees on the activity plan of the organisation. Sector Committees discuss and decide upon product and sector specific issues. All committees have 50% retailer and 50% producer/supplier representation and hereby creating an efficient partnership. The work of the Committees is supported by FoodPLUS, a not for profit limited company based in Cologne, Germany, fulfilling a secretariat function for EurepGAP. The Executive Management of Foodplus GmbH, i.e. its Managing Director, signs responsible for the implementation of Policies and Standards. Financial and legal ownership and responsability for FoodPLUS GmbH holds the EHI Retail Institute via its 100% Subsidiary EHI-Verwaltungsgesellschaft mbH. The EHI Retail Institute also operates the European Retail Academy, a global network of Research Institutes linked to retail activities and topics.

09-24-2018 | Business, Economy, Finances, B …
Tilhill Forestry
New partnership launched to help meet skills gap in forestry
A LEADING agriculture college has joined forces with the UK’s largest forestry and timber harvesting company to meet a growing demand for woodland workers. Coleg Cambria Llysfasi and Tilhill Forestry unveiled their new partnership - the first of its type - at the APF 2018 show held at Ragley Estate in Warwickshire today (Thursday). The aim of the Tilhill Diploma in Forestry and Woodland Management is to bring the forest industry
03-17-2017 | Fashion, Lifestyle, Trends
Business Worldwide
Global Kidswear Market 2017 : Okaidi, Gymboree, Mexx, Catmini, Tommy, Gap GAP, I …
Scope of Kidswear Market : A market study based on the "Kidswear Market" across the globe, recently added to the repository of Market Research, is titled ‘Global Kidswear Market 2017’. The research report analyses the historical as well as present performance of the worldwide Kidswear industry, and makes predictions on the future status of Kidswear market on the basis of this analysis. Get Free Sample Copy of Report Here : http://bit.ly/2nuErvP Top
02-27-2013 | Health & Medicine
Fleming Gulf Conferences
Bridging the gap – Healthcare and IT
One of the objectives of the Healthcare IT India Summit is to bring in the industry experts and regulators to converse and present the scope for the Healthcare Informatics. The summit will be held on 23th & 24th April, 2013, in Hyderabad and will focus on integrating Healthcare with Information Technology to make way for the future of Healthcare management system. Healthcare has come a long way from being perceived as
09-12-2011 | Science & Education
RDI Ltd
Distance Learning Courses fills the Gap
Many modern managers are finding that they reach a glass ceiling in their career, finding that other colleagues who hold MBAs are able to take the next step in their careers. Online education through RDI is the ideal way for working managers to balance their career, family and study all at once with distance learning. Distance learning courses from RDI include HNDs, BAs and Master’s Degrees in many subjects. Online education
11-03-2010 | Politics, Law & Society
German Center for Research and Innovation
The Widening Atlantic: Market Gap – War Gap – God Gap
NEW YORK (November 2, 2010) – The German Center for Research and Innovation (GCRI), in cooperation with the Heidelberg University Association, will host a transatlantic discussion on forces of internationalization, power shifts in an increasingly multi-polar world, and the structural differences of social policy between Germany and the United States. The event will take place on Monday, November 8, from 6:30-8:30 P.M., at the German House New York (871 United
10-29-2010 | Advertising, Media Consulting, …
PrintPlace
PrintPlace.com Wins ISO 12647 Gap Analysis Audit
Dallas, TX, October 22, 2010 -- Just this month, PrintPlace.com is able to yet again add another award to its list. Matt Louis, the Color Assurance Manager at PrintPlace.com, won the October 2010 ISO 12647 Gap Analysis Audit from KEE Consultants and sponsored by Alwan Color Expertise at the IDEAlliance G7 Summit at GraphExpo. In layman’s terms, this award recognizes PrintPlace.com, a leading online printing company, for meeting printing standards
Comments about openPR
OpenPR ist the nicest and most clearly laid out PR platform I have seen to this day. The press releases are displayed very nicely and clearly and without any unnecessary frills. The updates are fast and the finished release looks appealing and is clearly legible. Even with 16 years of experience one discovers new things from time to time. Congratulations!
Gabriele Ketterl, Director Marketing & PR, Menads