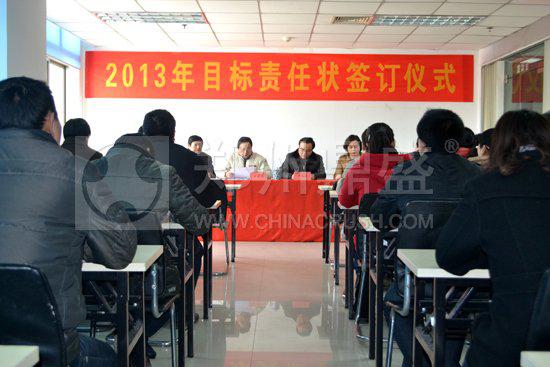 On the afternoon of March 2, 2013, DSMAC 2013 economic responsibility was signed in the company headquarters. The president Lu Hongbo and other 12 directors explicated their own economic responsibilities separately. In the afternoon, the meeting was held in the twelfth floor of the company headquarters. The president Lu Hongbo, vice-president Wang Shouan, finance manager Jin Tianchun and all the middle level managerial personnels attended the meeting. On the national anthem, the meeting began. Vice-president Wang, the meeting host, firstly explained elaborately the general plane of 2013 economic responsibility and the adjustment representing the company. Later, the president Lu and other 12 directors signed the 2013 economic responsibility.The president Lu Hongbo said, “ It is the innovative year for company in 2013. I hope that all departments keep in mind firmly the mission of making employee happier, company advanced, customers more satisfied and nation more prosperous. All the leaders should not betrayal the staff’s trust, unit the colleagues and maneuver all the possible factors in the work to reduce the cost. We must adhere to the enterprise culture essence “Efficient implementation, continuous improvement, enthusiasm learning and embracing change” on the course of innovation. The meeting was over on the song “Ode to Dingsheng”. It is believed that each department and system know clearly their own striving goal and development direction, and will create more brilliant tomorrow. More information about DSMAC is available at http://www.dscrushers.comDSMAC is a supplier of feeding, crushing and screening equipment, and related wear-resisting crusher spare parts in China. It is a general contracting expert of Gravel and Sandstone Production Line Project, and especially famous for its wear-resistant part, that is well known for its high-quality, long service-life and good service. Investing $100 million on an area of 156 acres production base, DSMAC reach to the annual output production capacity of crusher parts 15000t, machinery 12000t and high-tech materials 500t to countries and regions all over the world.Contact Information DSMAC Group Janet Zhang Facebook：Janet Zhang Phone: +86-371-6789-7680 E-mail: janet@dscrusher.com Fax: 0086-371-60535395 0086-371-65948723 Address: 6 Floor, Unit B, Torch Building, No.8 Guohuai Road, Hi-tech Development Zone, Zhengzhou, Henan Province, China

03-04-2013 | Industry, Real Estate & Constr …
DSMAC
DSMAC Impact Crusher Blow Bar Were Praised in Philippines
Since the exporting of DSMAC Mn13Cr2 blow bar into Philippines in the beginning of July, itYesterday, the Philippine customer called that the impact crusher blow bar performs very well and he felt satisfied with DSMAC products. has been working normally for almost one month. Early in June 2012, a Philippine customer was disturbed by the easy management of impact crusher blow bar in the process of crushing diabase. After searching
03-01-2013 | Industry, Real Estate & Constr …
DSMAC
Making Most Profit of Cement Company in Concrete Industry
In Cement industry, the most disturbing problem is the excess production capacity. In the condition of gloomy economy, the cement industry should change developing mode, upgrade the industry state to reduce the excess production capacity. However, there are also another new way to solve this problem, and it is to extend cement’s industry chain. Through the analysis of market developing rule, the cement’s invest on concrete industry is a feasible
03-01-2013 | Industry, Real Estate & Constr …
DSMAC
DSMAC Famous for Professional Crusher Spare Parts At Home and Abroad
In cement and mining, there is an indispensable question of abrasion in crushing equipment’ spare part. During the crusher operation, the enterprises are trying to reduce the spare part’s wear and also find out crusher parts with higher quality. From ores to fine powder, from aggregate to cement, all the building materials’ application can not be available without crushing machines, especially in mine, metallurgy, cement and other industries. The crusher’s performance
02-27-2013 | Industry, Real Estate & Constr …
DSMAC
Five Principles of DSMAC as the Domestic Best Crusher Enterprise
As the leader of crushing machine industry, DSMAC has its own principles for becoming the customer-trusted enterprise. However, what’s the principles of this achievement? First: Safety first, 8S priority Safety is the basic of madefaction, and each company regards safety as the protector. In DSMAC, safety is also put in the first place to make sure the normal production. Besides, DSMAC also learned the international popular 8S management method to ensure the