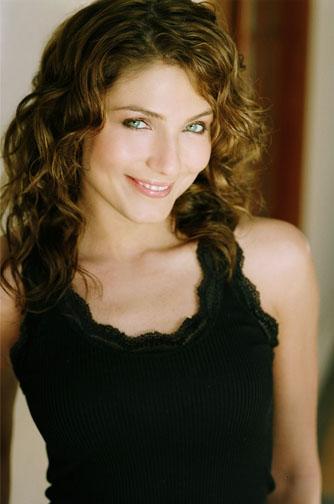 Los Angeles, CA…August 6, 2007…Marisa Petroro, an actress whose star is quickly on the rise, will be honored as “Italian-American Woman of the Year” by The Center for Italian and Italian-American Culture in her home state of New Jersey. The black-tie gala will be held on Saturday, September 22, 2007 at The Villa, in Mountain Lakes, at 7 p.m. and includes honoring other notable Italian-American individuals. Famous as Deal or No Deal Suitcase Holder #18, Marisa is being given the honor because she is an Italian-American celebrity who is recognized as being a positive role-model for the Italian-American youth. As a cancer survivor of Rhabdomyosarcoma (a rare childhood cancer that affects the muscles), Marisa volunteers her free time to helping people who have been diagnosed with cancer and are undergoing chemotherapy. Because Marisa is so outspoken about her battle with Rhabdomyosarcoma, a contestant on Deal or No Deal donated 10% of his winnings to the organization that helped her cause - The Tomorrow’s Children Fund. “This recognition has been a very humbling experience,” said Petroro. “With the freedom that comes with acting, I’m always looking for other ways to impact the public in a deeper, more meaningful way.” On the big screen in 2007, Marisa played the edgy girlfriend of Paul Rudd (40 Year Old Virgin, Anchorman) in Comedy Central’s hit movie Reno 911!: Miami. She is also starring in upcoming film Everybody Wants to Be Italian, a story about how two non-Italians pretend to be Italian to win each other’s hearts in Boston’s North End, slated to hit theaters in September. A local celebrity, Marisa has won multiple New Jersey beauty pageant crowns and in 1996 won the title of Miss Italia USA and placed in the Top Five for the title of Miss Italia World that same year (she is first generation Italian and Argentinean). Earlier this year she was also asked to be the Commencement Speaker at her alma mater, Kean University, in Union. “New Jersey is my home and as a public figure I will continue to do my best to let the world know what a wonderful place it is.” # # # Atomic Public Relations 1100 Glendon, 17th floor Los Angeles, CA 90024 Anthony Murillo Managing Publicist (323) 301-0167 anthony@atomicpr.com The Center for Italian and Italian-American Culture is an ever growing and evolving non-profit organization dedicated to preserving and promoting the culture and heritage of Italians and Italian-Americans. The Center has offered quality educational and cultural programming in New Jersey for more than a decade. Marisa will be speaking at the Center’s 16th Annual event. Tickets for this fundraising gala are being sold and proceeds from the event fund The Center's numerous programs.

You can edit or delete your press release New Jersey Native, Marisa Petroro, to Receive “Woman of the Year” Honor here

06-11-2021 | IT, New Media & Software
ReportsWeb
2021-25 Telecoms Mobile and Broadband witness to huge demands in upcoming years …
This global Telecoms Mobile and Broadband market report gives the end customers, which incorporates the business trained professionals, makers, retailers to choose the most recent things of market. The investigation framework uses a couple of perspectives for the combination of data, which incorporates the variety of information from the assessment papers, yearly reports which are appropriated by the associations, and the examples and upgrades of the huge players which are
04-09-2019 | Business, Economy, Finances, B …
ReportsWeb
The Baby Food Market in Italy 2017 | Heinz Italia SpA, Danone, Nestlé Italia Sp …
The Baby Food Market in Italy 2017 "The Baby Food Market in Italy 2017" is an analytical report by Publisher which provides extensive and highly detailed current and future market trends in the Italian market. The Italian baby food market has been contracting for the past six years, and enforced price decreases in the milks sector and lower prices in real terms in all other sectors, have depressed values. Overall consumption fell
09-12-2017 | Business, Economy, Finances, B …
Fior Markets
Global Relaxation Beds Sales Market 2017 - Living Earth Crafts, Holl's, Fitnessw …
Global Relaxation Beds Sales Market 2017 covers a complete market structure across the world with the detailed analysis of major key factors. This report provides strategic recommendations consulted by the industrial experts including market forecasts, profit, supply, latest market trends, demands and much more. The global market with the impact of future aspects is well discussed further in every possible way. Download Free Sample Report @ https://www.fiormarkets.com/report-detail/100266/request-sample Primary researches have been
04-29-2016 | Business, Economy, Finances, B …
Climaveneta
Sustainable Logistics for Decathlon Italia
The new logistics hub located in Brandizzo, serves 25 stores and guarantees clients that products are delivered in the shortest possible time, with the lowest CO2 emissions. This warehouse has a gross surface area of roughly 23,000 m2, and is divided into two units; one unit is mainly dedicated to picking while the other one only stocks bulky material. A new layout has been studied here and will be used in all
07-30-2009 | Energy & Environment
WRS Italia
WRS Italia: an international view
Nowadays themes related to the energy saving and recycling are relevant and significant topics to be considered to respect and protect the environment. Government, corporate and enterprises, key players in the countries’ economies, have a pivotal role in the environment safeguard and objectification of these purposes. Thus, these aims can be realized through the development of innovative systems and machines to involve companies to recycle and preserve the environment. Hence, WRS
05-15-2009 | Energy & Environment
WRS Italia
WRS Italia: a glance towards the future
Nowadays, environment, pollution, resources exploitation and recycling are considered pivotal themes and main characters in the agenda of companies, organization, and authorities. A large number of companies are making several efforts to support present and future recycling activities and numerous are also the challenges that businesses and governments are facing in order to employ and manage our planet resources. WRS Italia, in these issues, plays a role particularly active that
Comments about openPR
OpenPR ist the nicest and most clearly laid out PR platform I have seen to this day. The press releases are displayed very nicely and clearly and without any unnecessary frills. The updates are fast and the finished release looks appealing and is clearly legible. Even with 16 years of experience one discovers new things from time to time. Congratulations!
Gabriele Ketterl, Director Marketing & PR, Menads