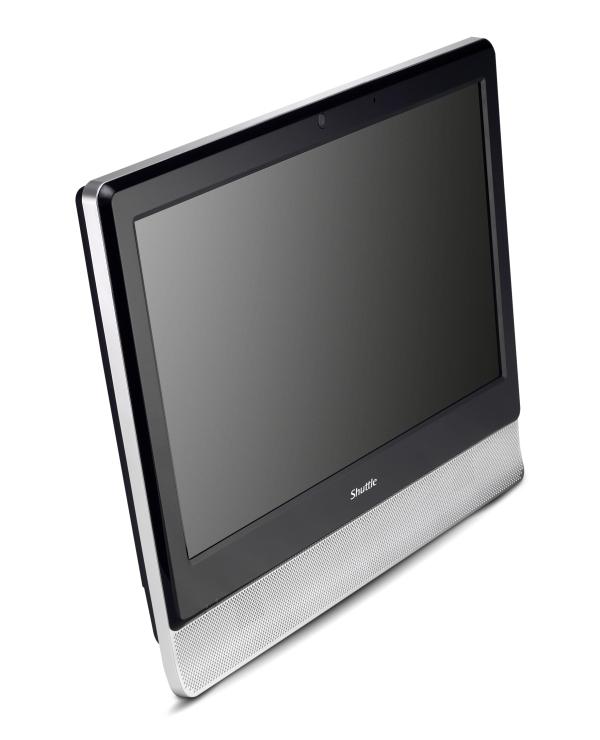 Dual Gigabit Ethernet, 3x COM and 1x LPT for unconventional applicationsElmshorn, Germany, 2013-02-12 - Shuttle Computer Handels GmbH, the European subsidiary of Shuttle Inc., one of the leading developers and manufacturers of compact PC solutions such as the world-renowned XPC Mini-PC Barebones, expands its range of All-in-One PCs with integrated monitors and adds a 46.7 cm (18.5") version to its original 39.5 cm (15.6") machines.As well as offering a larger display, the new Shuttle All-in-One Barebone X70S also provides significantly more power. For the first time conventional Intel desktop processors can be used for the LGA1155 socket, e.g. Intel Core i3/i5/i7 (up to 65 W TDP, heatpipe-cooled). DDR3 RAM up to a total of 16 GB can be installed in the two SO-DIMM slots. The 5.7 x 46.8 x 36.4 cm (DWH) chassis of the X70S also has space for a 2.5" drive (SSD/HDD) as well as expansions via the Mini-PCIe slot, which can be fitted, for example, with an mSATA module.The new model comes with Wi-Fi, webcam, microphone and stereo speakers for communication and media playback. Connectors for external speakers and microphone are also available. A second monitor can be hooked up via the HDMI interface. There are 2x USB 3.0 and 6x USB 2.0 ports on the side of the machine. The integrated card reader can read and write to standard SD memory cards.The two Gigabit network cards of the X70S, up to three serial interfaces (COM) and a parallel interface (LPT) make the system suitable for unconventional applications. If you remove the pedestal at the rear of the machine, the X70S can be fitted to a VESA wall mount, monitor arm or floor stand."We envisage the X70S being used in the digital signage segment, as a service terminal at POI, as a till system at POS or simply as a powerful desktop PC, depending on configuration," says Tom Seiffert, Head of Marketing & PR at Shuttle Computer Handels GmbH. "With its size, this machine fills an interesting gap and opens up interesting scenarios in combination with a second monitor."With the separately available PCL70 accessory, the X70S can be expanded with two additional serial interfaces (COM) and a parallel interface (LPT).The recommended retail price for the Shuttle All-in-One Barebone X70S is EUR 452.00 (ex VAT). This product is available now.Shuttle is exhibiting at this year's CeBIT in Hanover (05-09 March 2013) and looking forward to welcoming interested visitors at its stand in Hall 2, Stand C61.Product page: www.shuttle.eu/products/all-in-one/x70s/As one of the most experienced developers and manufacturers of Mini-PCs and portable devices, Shuttle ensures the highest production standards, consistent use of the latest platforms and a huge spectrum of application areas for its products. Established in 1983 in Taiwan, Shuttle Inc. specialises in the development and production of innovative Mini-PC solutions. The stock market listed company is represented globally through subsidiaries in Germany, the USA, Japan and China. Since 2001 the attractive cuboid PCs designed for virtually every application area have been the main focus of business for the head office operating out of Taipei. Confirmed by customers and the trade press alike, Shuttle stands out due to its effective management and its longstanding experience as a manufacturer of high-quality motherboards. Shuttle Mini-PC Barebones and Complete Systems have for years been the first choice for many system integrators, VARs, OEMs and ODMs. With its new, mobile PC solutions Shuttle also meets the constantly changing demands of consumers.Shuttle Computer Handels GmbH - PR Department - Fritz-Strassmann-Str. 5 25337 Elmshorn (GERMANY) www.shuttle.eu press@shuttle.euPress Contact:Europe (Germany, Austria and Switzerland) Tom Seiffert +49 4121-476-885 t.seiffert@shuttle.euEurope (Benelux, Italy, Spain, Scandinavia, Portugal, Greece, Ireland and Eastern Europe) Christian Scheibel +49 4121-476-891 c.scheibel@shuttle.euEurope (France and Belgium (French-speaking region)) Boris Furth +49 4121-476-833 b.furth@shuttle.eu