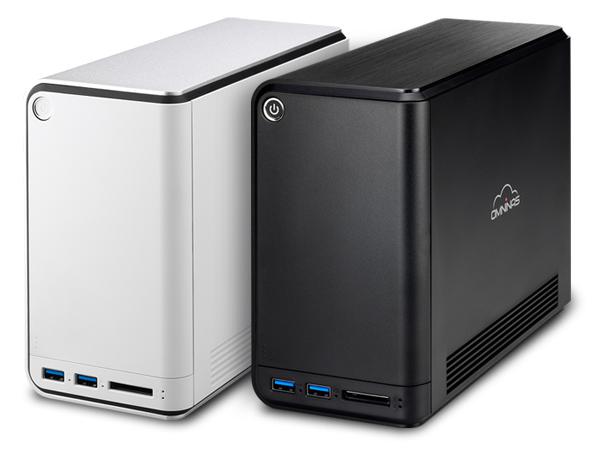 Elmshorn, Germany, 2013-10-09. Shuttle Computer Handels GmbH, the European subsidiary of Shuttle Inc., one of the leading developers and manufacturers of compact PC solutions such as the world-renowned XPC Mini-PC Barebones, is expanding its NAS product family. With two new network storage solutions, there is now a whole spectrum of models available for various data backup and storage requirements via Gigabit Ethernet.Two new machines are coming onto the market - the OMNINAS KD21 and KD22 - offering increased transmission speeds and a greater range of functions. New ARM-based processors with 1.0 to 1.2 GHz and twice the amount of memory enable data transfer speeds of up to 110 MB/s (read)* and 75 MB/s (write)*. Thanks to the enhanced performance of the new processors, all KD21 and KD22 server services can be activated at the same time.The new features include a range of functions for increased user convenience, e.g. a power on/off schedule, online firmware updates and direct image transfer from an attached digital camera to the NAS. Initial setup has also again been considerably simplified. Experienced users will appreciate the Wake-on LAN and integrated FTP server. For the first time two hard disks can operate in single mode, if desired – ideal for subsequent expansion of disk capacity. To reduce light interference in the home environment, the LEDs on the KD21 and KD22 can now be disabled at the press of a button.A particular feature of the flagship KD22 machine is the integrated wireless LAN function which allows notebooks, smartphones and tablets to have wireless access to the NAS server and the network in which it is located. Since this creates an additional WLAN network, the network coverage (range) should ideally extend as terminal devices now have access to more than one network."We are grateful for the numerous responses and suggestions we have received since the launch of our first storage solution. The extended OMNINAS family benefits from this feedback," says Tom Seiffert, Head of Marketing & PR at Shuttle Computer Handels GmbH. "Important features have been added to the KD21 and KD22 so that they work noticeably more rapidly."Overview of the technical differences between the different members of the product family: Shuttle OMNINAS KD20: 75/55 MB/s (R/W)*, 2x 750 MHz, 256 MB RAM Shuttle OMNINAS KD21: 100/70 MB/s (R/W)*, 1.0 GHz, 512 MB RAM Shuttle OMNINAS KD22: 110/75 MB/s (R/W)*, 1.2 GHz, 512 MB RAM, wireless LAN access pointThe OMNINAS trio all possess a unique aluminium chassis that enables quiet and cool operation. The ARM-based processors are extremely energy-efficient, making Shuttle's NAS solutions the most frugal on the market.All OMNINAS models support both 2.5" and 3.5" drive formats. Consumers can choose almost any HDD or SSD with 3 Gbit/s or 6 Gbit/s SATA interface. The machines also come with Acronis True Image backup software. Mac users backup with "Time Machine.The previous KD20 model continues to be available and is ideal for NAS novices or as a second machine for regular data backup of content from an existing NAS.A short product video presents 360° views of the two new models and also gives a glance inside: www.youtube.com/watch?v=6KtlEPdmUF4Shuttle's recommended retail price is EUR 133.00 (ex VAT) for the KD21 and EUR 156.00 (ex VAT) for the KD22. The KD21 shown here is available now from specialised retailers Europe-wide. The European launch of the KD22 is expected at the beginning of November 2013.*Measured values may vary depending on hardware/software equipmentProduct page: www.shuttle.eu/products/nas/As one of the most experienced developers and manufacturers of Mini-PCs and portable devices, Shuttle ensures the highest production standards, consistent use of the latest platforms and a huge spectrum of application areas for its products. Established in 1983 in Taiwan, Shuttle Inc. specialises in the development and production of innovative Mini-PC solutions. The stock market listed company is represented globally through subsidiaries in Germany, the USA, Japan and China. Since 2001 the attractive cuboid PCs designed for virtually every application area have been the main focus of business for the head office operating out of Taipei. Confirmed by customers and the trade press alike, Shuttle stands out due to its effective management and its longstanding experience as a manufacturer of high-quality motherboards. Shuttle Mini-PC Barebones and Complete Systems have for years been the first choice for many system integrators, VARs, OEMs and ODMs. With its new, mobile PC solutions Shuttle also meets the constantly changing demands of consumers.Shuttle Computer Handels GmbH - PR Department - Fritz-Strassmann-Str. 5 25337 Elmshorn (GERMANY) www.shuttle.eu press@shuttle.euContact details:Europe (Germany, Austria and Switzerland) Tom Seiffert +49 4121-476-885 t.seiffert@shuttle.euEurope (Benelux, Italy, Spain, Scandinavia, Portugal, Greece, Ireland and Eastern Europe) Christian Scheibel +49 4121-476-891 c.scheibel@shuttle.euEurope (France and Belgium (French-speaking region)) Boris Furth +49 4121-476-833 b.furth@shuttle.eu