Beyond The Music With Gotta Grind Syndicate 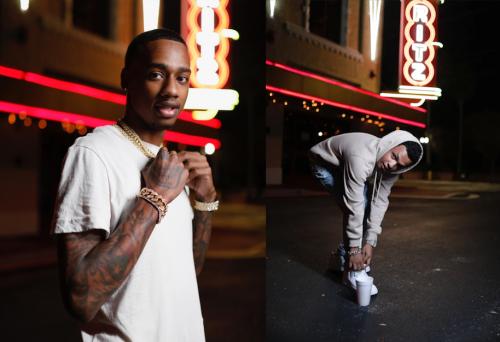 Talented American rappers and brother duo, Big NoNamee and Lil Coto, continue to challenge the status quo in the industry amidst rave reviews for their singles FL, United States — The duo of Big NoNamee and Lil Coto, fast-rising American rappers and founders of Gotta Grind Syndicate, an independent record label, looks poised to deliver all shades of amazingness to music lovers across the globe. The collective and record label is already gaining ground not only in Jacksonville, Florida but in different parts of the world, with the works of Big NoNamee and Lil Coto enjoying massive airplay and streams across platforms.The music industry continues to evolve as more talented acts emerge in different parts of the world to entertain fans. Rap remains one of the oldest genres in the world of music, standing the test of time, amidst a series of evolution. However, Big NoNamee and Lil Coto have literally stormed the rap game in recent times, delivering amazing punchlines on banging beats to bless the ears of lovers of good music worldwide.Born March 23 1998, the 23-year-old Nicholas James Evans, known professionally as Big NoNamee, has grown over the years, honing his skills and creating a unique style that has endeared him to rap lovers. The Florida native, otherwise known as GGS NoNamee, is a father of one, member and founder of the collective and record label Gotta Grind Syndicate, with his brother, Lil Coto, completing the duo. Big NoNamee dropped his single Big Guwap to an amazing reception and he has followed up the feat with other captivating works.Henry Virgil Noble, known professionally as Lil Coto, is an American rapper and singer from Jacksonville, Florida. Born June 23, 2001, the 20-year-old talented singer also known as GGS Coto a member and founder of the collective and record label Gotta Grind Syndicate. His sibling is Big NoNamee, who also doubles as an associate act.The duo is making a name in the industry even as solo acts, with Big NoNamee’s “Coldhearted” single gaining over 160k streams across all platforms. He has also followed up with a release called “Big Guwap” which features his first-ever music video that gained 20k views in less than a month. Lil Coto also has several songs on the brink of release. Consequently, music fans can expect lots of great songs from him as well as works featuring both artists together.Contact Info: Name: Marisleysis Castro Email: GottaGrindSynd@gmail.com Organization: Gotta Grind Syndicate Website: https://youtube.com/channel/UC3TEN8H8xgQS7fKPfMZA05g Video URL: https://youtube.com/channel/UC3TEN8H8xgQS7fKPfMZA05gFor more information about Big NoNamee and Lil Coto, follow them on their official social media handles – GGSNoNamee, GGS_Coto, and GottaGrindSyndicate.

01-18-2022 | Arts & Culture
Doulitsa Press Portal
RNBSPEAKZ is all set to launch New Track ‘O Well’ On the 31st of January
The rap artist is best known for his multilingual mixes and for his unique style of music. Date/Place: RNBSPEAKZ is happy to announce the launch of his new track ‘O Well’. The track will be available from 31st January 2022 on all platforms for his followers who love his unique style of music. The track will be master and mix way better qulity that the one in soundcloud now . Followers can
01-11-2022 | Arts & Culture
Doulitsa Press Portal
Music Sensation Miracle Pikin Biography and a Collab with Preston HudmanPreston …
@miraclepikin biography and his collab with Preston Hudman Miracle Pikin is a young Cameroonian singer who hails from the grasslands of Cameroon precisely from Ndop-Ngoketunja in the Northwest region. His genre of music is diverse (Afropop/ Rap) choosen out of passion and with the zeal of creating something unique. Passionate about singing since he was 6 years old. As a normal kid, growing up loving music, he started following many established
01-10-2022 | Arts & Culture
Doulitsa Press Portal
Eugee Hopes to Inspire People to Awaken Their Inner Passion & Rise Above Life’ …
EUGEE is the latest rising talent to come out of New Orleans. Far from the traditional artist, EUGEE is a full-time medical doctor who has served valiantly on the frontlines against the COVID-19 pandemic. She put her music aspirations aside to focus on helping the community, but now, EUGEE is ready to showcase her creative talents to the world. Growing up as a plus-sized Nigerian-American female, EUGEE faced a lot of
01-09-2022 | Business, Economy, Finances, B …
Doulitsa Press Portal
Meet Mehrnoosh Nemat, The First Iranian Female Car Reviewer in The World
This car reviewer from Iran is doing wonders in the International car community Mehrnoosh Nemat is the first Iranian female car reviewer who has set foot in the realms of the car world. Car reviewers have become a very important part of the car community. They are well informed, connected, bring comparisons and reviews which are of great help to car enthusiasts. Mehrnoosh Nemat Before becoming a car reviewer, Mehrnoosh has been as

06-07-2018 | IT, New Media & Software
IT Intelligence Markets
Big Data Infrastructure Market
The Global Big Data Infrastructure Market will grow tremendously at a CAGR of +33% over the forecast period. With the emergence of efficient data management technologies, the market for big data infrastructure has a positive outlook until the end of 2020. Recently, there has been an upsurge in both structured and unstructured data, resulting in the increasing popularity of big data. Earlier, management and analysis of these data were a
11-08-2017 | Health & Medicine
ReportsWorldwide
Big Pharma Outlook 2026
Boston, MA ReportsWorldwide has announced the addition of a new report title Big Pharma Outlook 2026 to its growing collection of premium market research reports. Pharmavitae Analytics casts its eye out to 2026 with challenging trends in healthcare management set to crystallize, Big Pharma will add $29.5bn in revenues out to 2026, generating $351bn in prescription pharmaceuticals at a low single-digit compound annual growth rate (CAGR) of 0.9%. Using in-house sales forecasts,
06-27-2017 | Business, Economy, Finances, B …
Global Financial Technology (FinTech) Market Size, Analysis, Trends, Industry Growth and Forecast 2022
Big Market Research
Big Market Research has added a report, titled, “Global Financial Technology (FinTech) Market Size, Status and Forecast 2022.”The report provides a detailed information and analysis of production, revenue, drivers & opportunities, key manufacturers, and competitive landscape. Furthermore, current market trends and growth opportunities are discussed along with extensive analysis of each segment for the historic period, 2012–2017 and the forecast period, 2017–2022. ABSTRACT About Financial Technology (FinTech) Market An overview of the
06-12-2017 | IT, New Media & Software
Malaysia 3D Animation Software Market analysis by manufactures, applications, - Size, Share, Trends, Company Profiles, Demand, Analysis, Research, Report, Opportunities, Segmentation and Forecast, 2017 – 2022 (Status And Outlook)
Big Market research
According to a report added by Big Market Research, titled, “2017-2022 Malaysia 3D Animation Software Market Report (Status And Outlook)”. Get Sample@ https://goo.gl/YgkrFg The research is of utmost significance to big market players as it offers a comprehensive understanding of continuous changes in the supply and demand scenario. The report a brief introduction on the Malaysia 3D Animation Software Market in reference to scope and product. It divides the market
03-03-2016 | IT, New Media & Software
German Center for Research and Innovation
Big Data – Small Devices
Are we facing a new way of doing data science? Do we need novel methods for machine learning? On Monday, March 7, leading IT experts will convene at the German Center for Research and Innovation (GCRI) in New York for a discussion on Big Data and resource-restricted systems. NEW YORK (March 3, 2016) – The amount of digitally recorded information in today’s world is growing exponentially. Massive volumes of user-generated information
07-01-2010 | Leisure, Entertainment, Miscel …
ParetoLogic
ParetoLogic Raises Big Bucks for Big Bike
This year’s Big Bike fundraiser for the Heart and Stroke Foundation raised almost $100,000 in Victoria, with over $10,000 of that coming from ParetoLogic. As the highest fundraiser in Greater Victoria, the software developers were awarded the Golden Gears award. ParetoLogic more than doubled their initial team goal of $5,000 due to overwhelming support from the staff and management of ParetoLogic. “This charity has a personal connection for many of
Comments about openPR
OpenPR is clearly structured and remains true to its principle of confining itself to the essential parts. OpenPR has proven to be a very good and reliable partner to our media agency: Within the shortest time the releases are online and go down well with the media representatives. The success of OpenPR is reflected in the steadily increasing number of press releases. It is good that OpenPR exists!
Ursula Koslik, Director Marketing & PR, F+W Hamburg