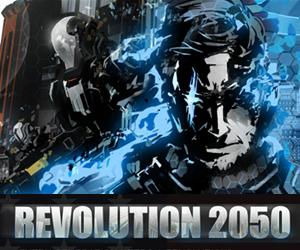 Menlo Park, CA February 8, 2012-Lakoo has set the official launch date of their latest title “Revolution 2050” for release on February 14th. This online multiplayer strategy based game has been in development over the course of the last year and a half, with its release to greatly target the North American demographic. “Revolution 2050 represents one of our largest launches within our gaming portfolio since Empire Online, which has seen over 12 million downloads world-wide.” said Ryu Hung, Studio Head. “We cooperated with U.S. based story writers and graphic designers to create an experience which truly immerses the player in the gameplay.”Revolution 2050, takes place in the near future where the United States government has fallen under the power of a corrupt corporate tyrant and the United States stands divided. Here the player can take control of a struggling city and turn it into a thriving metropolis. Players can, build an army and battle power-hungry factions and blood thirsty gangs in a quest to reunite the United States. Additional information about the tile can be obtained online at www.revolution2050.com prior to its release.Lakoo (Good Gamer Karma) is a leading mobile online game developer in Greater China, headquartered in Hong Kong with offices in Guangzhou, Beijing, and Menlo Park, California. Shareholders of Lakoo include Sequoia Capital. Lakoo is dedicated to the development and publishing of games on iPhone, Android, and other mobile devices.Alfredo Rudas 3000 San Hill Rd Building 4, Suite 250 Menlo Park, CA 94025 Marketing United States alfredo@lakoo.com

04-11-2018 | Business, Economy, Finances, B …
SlideCamp
SlideCamp Celebrates the PowerPoint Revolution!
SlideCamp Celebrates the PowerPoint Revolution Say bye bye to the blah blah and hello the aha! SlideCamp is a newly all-encompassing solution to making everyday business presentations simple for entire workforces. SlideCamp is an online platform which has been created as a response to corporate needs in presentations. Keeping the quality, quantity, and usability of presentations has been a constant struggle for businesses for many years, but no more. We have just finished testing our presentation upload, sharing
10-20-2017 | Business, Economy, Finances, B …
Talenter
Talenter.io - a quiet mighty revolution
Our future is goint to be quite different from our present. Artificial intelligence and autonomous robots will do most of our tasks automatically. Goods will be as favorable as never before. Abundance is normal for some people. Others, however, find no tasks, no opportunities to create prosperity through employment. The gap between the rich and the poor blows the societies around the world. Only a few people will make a living in manufacturing, processing and administration and
05-09-2011 | Tourism, Cars, Traffic
HelmetHead Cycle Gear
HelmetHead Cycle Announces Upcoming Revolution Website
Donned as a hybrid between a webstore, forum and social media outlet, HelmetHead Cycle's upcoming site also features a lifetime commission affiliate program that gives its customers an opportunity to earn a commission from sales to other customers. In 2008, development began on a new webstore for HelmetHead Cycle which included enterprise level development and security technology to further their growth, as well as strengthening their customer security. The code was finalized and
08-21-2008 | Leisure, Entertainment, Miscel …
Hermit of the Mountain, LLC
The Revolution Has Begun
The first episode of science-fiction series "Venus Rises" is now available on vidcast. "Ikarus" is a short film prequel to Venus Rises Series 1. Viewers can watch "Ikarus" at http://watch.venusrises.com The vidcast player contains character clips, CG animatics, and 3D model walk-throughs by engineering physicist Arnand Kularajah. "Ikarus" features the talents of Michael Ian Krupnick, Robert Morris, and Julia Hiroko Howe. Musical credits include scores by Peter Calderon,
04-21-2008 | Business, Economy, Finances, B …
vbuyonline.com
Vbuyonline.com - Revolution in online shopping
Vbuyonline.com is an online shopping mall; offering range of products from food to fashion, from home to health. The company aims to provide hassle free e-shopping experience by ensuring easy and secured payment and delivery modes. A new name for online retailing with special features like online customer response and doorstep delivery. Vbuyonline is fast-growing and promising company is all set to be a milestone in the industry with authentic
12-18-2007 | Leisure, Entertainment, Miscel …
Guild of Blades Publishing Group
American Revolution Board Game Released
Dec 17th, 2007. Davison, MI. - The Guild of Blades Publishing Group, a leading publisher of historical strategy board games, is pleased to announce the release of its latest game, the American Revolution Board Game. An Empires of History game. The American Revolution board game also represents the first game in the new Signature game series for the Empires of History game line. The Signature Series represents the 6th Empires of
Comments about openPR
OpenPR ist the nicest and most clearly laid out PR platform I have seen to this day. The press releases are displayed very nicely and clearly and without any unnecessary frills. The updates are fast and the finished release looks appealing and is clearly legible. Even with 16 years of experience one discovers new things from time to time. Congratulations!
Gabriele Ketterl, Director Marketing & PR, Menads