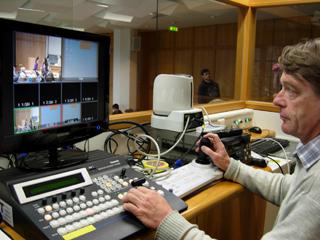 Rudi Luik in one of the control rooms for the transmission of lectures and presentations.

Ever since its modernisation at the start of the year, the medical-technical infrastructure in use at Tübingen University Gynaecology Clinic is amongst the most modern of its kind in the world. This also applies to the Telemedicine video transmissions from the operating theatres which can be made in high resolution HD format as well as in 3D. This three dimensional HD live streaming is possible thanks to the innovative encoder and decoder technology from Teracue AG, Germany.During the inauguration of the newly equipped operating theatre, the guests from the worlds of academia and politics – including Baden-Württemberg's Minister of Science Theresia Bauer – were able to convince themselves of 3D transmissions at the University Hospital's Gynaecology Clinic. In this context, the guests were clearly shown the enormous potential which high resolution, clinical images in HD and 3D offer for the areas of research and teaching through their detail-richness, depth and sharpness. Next, the guests watched the live transmission of a tumour operation on a large canvas screen in the conference centre of the clinic. Transmissions of this kind are being used increasingly for student teaching and academic presentations.To attain a sustainable design and a future-proof transmission solution, the University Hospital is using approved television and media technology standards. Rudi Luik, responsible for AV media in the business division of IT at University Hospital Tübingen (UKT): "During the course of the updating of our transmission equipment, it was especially important to us to integrate a solution which can work with established media interfaces and formats that can be seamlessly incorporated in our current IT infrastructure. This is one of the main reasons why we decided on the IPTV solutions from Teracue. These are based on the current standards such as HD-SDI and H.264-codec, and completely omit proprietary technologies, especially for 3D use. Therefore we are also open to linking individual manufacturers of medical imaging device technology." For the IP streaming the image signals from the endoscopy devices of manufacturer Karl Storz GmbH & Co. KG were used and transmitted with encoders of type ENC-300-HDSDI from Teracue. This means the video signals from the operating theatres can not only be distributed in high resolution HD, but also in 3D images - throughout the video IP network of University Hospital Tübingen - whose campus is widely spread throughout the city.At the end of January, this was demonstrated once again in the scope of a two-day international training conference at the University's Department of Neurosurgery. With the help of the streaming technology from Teracue and 3D Microscopy from manufacturer Leica, and in cooperation with TV-Studios Leonberg, the images of the operation were transmitted via live 3D feed. The images from the operating theatre in the Neurosurgery Department were transmitted over the hospital's internal IP network to the lecture theatre in the Department of Anatomy - where in three kilometres distance - the live 3D signals were projected and viewed by the conference participants.About Teracue AG Teracue AG - Broadcast & IPTV Systems was established in 1991 and manufactures video processing solutions for IPTV, video-networking and streaming. Teracue provides encoder, decoder, stream-viewing/recording, as well as DVB-TV gateway and IPTV headend products: used mainly in broadcast and contribution networks, inside playout facilities, for healthcare and medical applications, for corporate and digital business TV, in universities and schools for education and training, inside fire/police centres, control rooms, aerospace companies, military and federal organisations for archiving, monitoring and debriefing. Teracue IPTV products enable professional system integrators to build robust, comprehensive end-to-end IP video systems. More information is available at www.teracue.com.Press Contact: Rainer Link, Marketing Manager Teracue AG Schlossstr. 18 85235 Odelzhausen Tel: +49 (0)8134 555 150 rainer.link@teracue.com www.teracue.com

05-26-2020 | Advertising, Media Consulting, …
Ample Market Research & Consulting Private Limited
Nursing Education Market Can Become Bigger in Five Years? Key Players Duke Unive …
The Nursing Education Market Research Report aims to provide insights that strongly demonstrate the market structure, scope, history, potential, and development perspective. By crossing through the historical and present market status, the Nursing Education market report provides authentic and reliable estimates for the forecast period. The report presents the market competitive landscape and consistent in-depth analysis of the major vendor/key players in the market along with the impact of economic
05-05-2020 | Health & Medicine
The Research Insights
Nursing Education Market Research Report 2020-2027| Duke University, Johns Hopki …
An informative data report titled Nursing Education Market was published by The Research Insights. It takes a closer look at the different aspects of the businesses, that are responsible for fueling the growth of the companies. Additionally, it offers some significant factors, which are restraining the progress of the industries. Primary and secondary research techniques have been used by analysts to study the data effectively. The global market is estimated
02-01-2019 | Science & Education
KLE Technological University
KLE Technological University partners with Coventry University, UK
KLE Tech, in its endeavour to create better learning environments to students and giving them multi-cultural exposure, has entered into a MoU with Coventry University (www.coventry.ac.in), one of the leading universities of United Kingdom. Prof.Ashok Shettar, Vice Chancellor signed the MoU with Prof.Richard Dashwood, Deputy Vice-Chancellor (Research) of Coventry University on October 08, 2018. As per this MoU, both Universities would be collaboratively working in the areas of research, faculty development
06-08-2017 | Science & Education
Banasthali
Banasthali Vidyapith – University for Women & University with a Difference
Every educational institution in India today has a name but only very few like Banasthali have a legacy. The evolution of Banasthali is nothing short of a fairy tale in which the parents freedom fighter and Gandhian Pt Hiralal Shastri and Padma Bhushan & Jamnalal Babaj Award winner Smt Ratan Shastri took up the mission with passion for setting up an institution at Banasthali to fulfill the desire of their
02-01-2011 | Advertising, Media Consulting, …
IMM Interactive
COPEAC UNVEILS “COPEAC UNIVERSITY”
COPEAC Affiliate Network Launches Exclusive Education Portal Woodbury, NY (January 26, 2011) – COPEAC, IMM Interactive’s exclusive affiliate network, is one of the largest and most respected performance-based ad networks in the digital advertising sector with over 40K publishing partners. For these partners, COPEAC is offering an exclusive education tool called COPEAC University; an online education portal with valuable resources for success in Affiliate Marketing. Offered exclusively for COPEAC members, COPEAC
06-17-2010 | Science & Education
Global Academy Online, Inc.
University of South Africa, Number One Online University in Africa
According to the 2010 edition of the Best Worst Online Degree Programs, the University of South Africa is ranked the number one online degree provider among Africa’s 53 nations. The University of South Africa’s vision is to be Africa’s premier distance learning institution. It would appear, according to the e-book that they have succeeded. The university’s roots go back over 130 years. The Division of External Studies was created
Comments about openPR
OpenPR is clearly structured and remains true to its principle of confining itself to the essential parts. OpenPR has proven to be a very good and reliable partner to our media agency: Within the shortest time the releases are online and go down well with the media representatives. The success of OpenPR is reflected in the steadily increasing number of press releases. It is good that OpenPR exists!
Ursula Koslik, Director Marketing & PR, F+W Hamburg