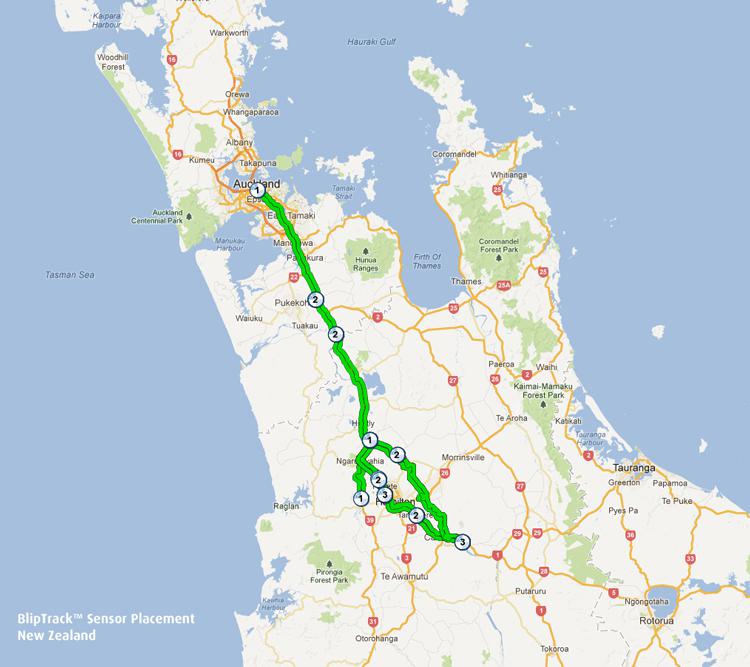 Sophisticated Danish technology, deployed and operated by Beca, is now being used by the New Zealand government to demonstrate the benefits of investment in New Zealand’s transportation network. The system, imported from Blip Systems in Denmark, involves tracking anonymous Bluetooth devices such as cell phones, headsets, in car navigation systems, as they travel in New Zealand, and using this information to identify travel times and route preference. The Bluetooth Address´ collected is encrypted in the sensor, making it impossible to relate the Bluetooth address of a device to an individual. The on-going collaboration between Beca and Blip Systems has led to the system being deployed across three regions in New Zealand (Auckland, Waikato and Wellington), with coverage expected to expand further in 2013. Recent press releases by the New Zealand Transport Agency (the NZTA) have used information from the system to successfully demonstrate the travel savings provided by the newly completed $US 160m Te Rapa bypass. The NZTA's, Waikato Expressway Principal Project Manager, Richard Young says: "We’re extremely pleased with the final result. The new road is delivering real time savings for all motorists, along with making the journey safer. In total it takes about seven minutes off commuters’ journey each day. That is a significant time saving and also a saving on fuel costs." The Te Rapa Bypass project is the first of a planned $US 2 billion investment in the Waikato region’s transportation network over the next eight years. The BlipTrack™ solution has been established in advance of these projects and will continue to assess the benefits of each of these projects as they are completed. The BlipTrack™ solution has been established in advance of these projects and will continue to assess the benefits of each of these projects as they are completed.The Waikato network uses an initial nine BlipTrack™ roadside mounted sensors, to monitor travel times and route choices across the Waikato Region, with more units being added as new sections of road are opened. http://www.nzta.govt.nz/about/media/releases/2365/news.html The system has also been used to demonstrate the value of investment in other parts of the country, including following the completion of the $US 250m Victoria Park Tunnel in Auckland. Beca has also deployed BlipTrack™ to monitor the behavior of pedestrians – notably at Auckland Airport, where the solution has been online since 2010. The system provides a good understanding of passenger delays encountered during heavy passenger loading, which helped inform operational decisions for the airport while Auckland was hosting the 2011 Rugby World Cup, the largest international sporting event of 2011. Beca is a market leader in engineering, technology and analytical services across the Asia-Pacific. Senior Transportation Analyst, Chris Vallyon has been pleased with the performance of the BlipTrack™ product: “The Bluetooth tracking technology provided by Blip Systems provides a significant addition to the suite of technologies available to assist New Zealanders in understanding the performance of their assets and infrastructure. The hardware has proven to be robust enough to survive New Zealand’s volatile weather conditions, and the vendors have been proactive and efficient in creating a highly flexible matching system and then adapting it to suit our specific requirements. We’re very satisfied with the service we’ve received to date.”BLIP Systems is a privately held wireless technology company with headquarters near Aalborg, Denmark. It was founded in august 2003 as a MBO of the Bluetooth activities within Ericsson Denmark. BLIP Systems (Bluetooth Local Infotainment Point) was established with a vision of using the new connectivity possibilities in mobiles, such as Bluetooth, to deliver proximity services. The vision and high expertise at BLIP Systems derives from the extremely industry experienced team. BLIP Systems focuses on developing and selling the people tracking product BlipTrack™. The development of the platform for this products began in 1998 at Ericsson, and the platform product was transferred to BLIP Systems. BlipTrack™ is the latest product invention, at first intended for targeted queue measurements in airports, but now expanded to include flow and queuing analysis in road traffic, train stations, cities etc.BLIP Systems Haekken 2, Vester Hassing 9310 Vodskov Denmark Phone: 0045 98258200 Mail: sales@blipsystems.com www.blipsystems.comPresscontact: Christian Bugislaus Carstens / 0045 51168586

08-28-2013 | Industry, Real Estate & Constr …
BLIP Systems
BLIP Systems and G4 Apps Team Up to Provide North America With Innovative and Co …
In BLIP Systems´ aspiration to be the world´s leading provider of Bluetooth and Wi-Fi measurement solutions, the company has made a strategic partnership with Canadian G4 Apps Inc. Vodskov, Denmark, March 08, 2013 -- BLIP Systems and G4 Apps today announced a broad strategic partnership that combines the proven wireless solutions of BLIP Systems with ambitious driver assistance and traffic management software company G4 Apps to provide North America with the
05-10-2007 | Advertising, Media Consulting, …
BLIP Systems
The future of advertising showcased at Cannes Lions
The opportunities of Location Based Mobile Marketing will be showcased by the Mobile Marketing experts, BLIP Systems and N’volve, from Denmark, at the prestigious Cannes Lions International Advertising Festival in June. This year the prestigious Cannes Lions Festival will showcase a unique workshop about Mobile Marketing, taking today’s most powerful communication tool and turning it into tomorrow’s most powerful advertising media. The workshop, which will take place on Friday the 22nd of

05-11-2021 | Business, Economy, Finances, B …
PROLIM
PROLIM expands into Australia and New Zealand
Plano, Texas, Detroit, MI, Melbourne, Australia – May 11, 2021– PROLIM Global Corporation (“PROLIM”) announced today that it has acquired Melbourne, Australia-based Edge PLM (“Edge PLM”) Software Pty Ltd. Founded in March 2004, with over 330 customers, Edge PLM provides customers across Australia and New Zealand with world-class digital design, simulation, test, manufacturing and data management software and service solutions. Edge PLM specializes in the supply, integration, consulting, and training of
02-18-2021 | Advertising, Media Consulting, …
Ken Research Pvt Ltd
New Zealand Agriculture Market, New Zealand Agriculture Industry, New Zealand Ag …
Agriculture has always been of boundless importance for the New Zealand, as feeding the world’s prime population is not a relaxed task. The New Zealand government has been associate the agriculture industry with an effective amount of policies, demanding to stabilize the output and seeking ways to make sure the sector is growing healthily and sustainably. The New Zealand federal government has been decidedly supportive of agriculture for decades, and
08-03-2018 | Science & Education
MakeMyAssignments.com
MakeMyAssignments.com provides customized help in New Zealand
We all cherish the countless memories of school life and college life. It reminds us of the fun-filled, stress free days. But one thing that bothers every child during this blissful tenure is the workload that is infused on them. Many a times, the amount of work is unreasonably high that it totally takes away all the frolic and induces a sense of helpless and a will to escape. Students
09-19-2017 | Industry, Real Estate & Constr …
Orbis Research
Retailing in New Zealand
Summary This report helps to analyze competitive developments such as joint ventures, strategic alliances, mergers and acquisitions, new product developments, and research and developments in the Retailing in New Zealand Description Retailing in New Zealand experienced a positive performance in 2016, driven by the strong demand for domestic and international goods and services. This owed much to continuing economic recovery, the improvement in employment and the rise in migrants, especially in major cities
09-13-2017 | Science & Education
GlobeMetrix
Global Lixisenatide Market 2017- Sanofi-Aventis, Zealand
The Report entitled Global Lixisenatide Market 2017 analyses the crucial factors of the Lixisenatide market based on present industry situations, market demands, business strategies adopted by Lixisenatide market players and their growth scenario. This report isolates the Lixisenatide market based on the key players, Type, Application and Regions. The Lixisenatide industry research report mainly focuses on Lixisenatide industry in global market. The major regions which contribute to the development of Lixisenatide
09-12-2017 | Fashion, Lifestyle, Trends
Market Research Future
Manuka Honey Market Key Players: Comvita Limited (New Zealand), Watson & Son Ltd …
Market Research Future published a Half Cooked Research Report (HCRR) on Global Manuka Honey Market which is estimated to grow more than 4.3% during the period 2017-2023 Competitive Analysis- The major key players in Manuka Honey Market are Comvita Limited (New Zealand) Watson & Son Ltd (New Zealand) Manuka Health (New Zealand) API Health (New Zealand) Wedderspoon (New Zealand) Mossops Honey (New Zealand) Cammells Honey (New Zealand) Manuka manufacturers across various regions follow the strategy of improving their existing product
Comments about openPR
OpenPR ist the nicest and most clearly laid out PR platform I have seen to this day. The press releases are displayed very nicely and clearly and without any unnecessary frills. The updates are fast and the finished release looks appealing and is clearly legible. Even with 16 years of experience one discovers new things from time to time. Congratulations!
Gabriele Ketterl, Director Marketing & PR, Menads