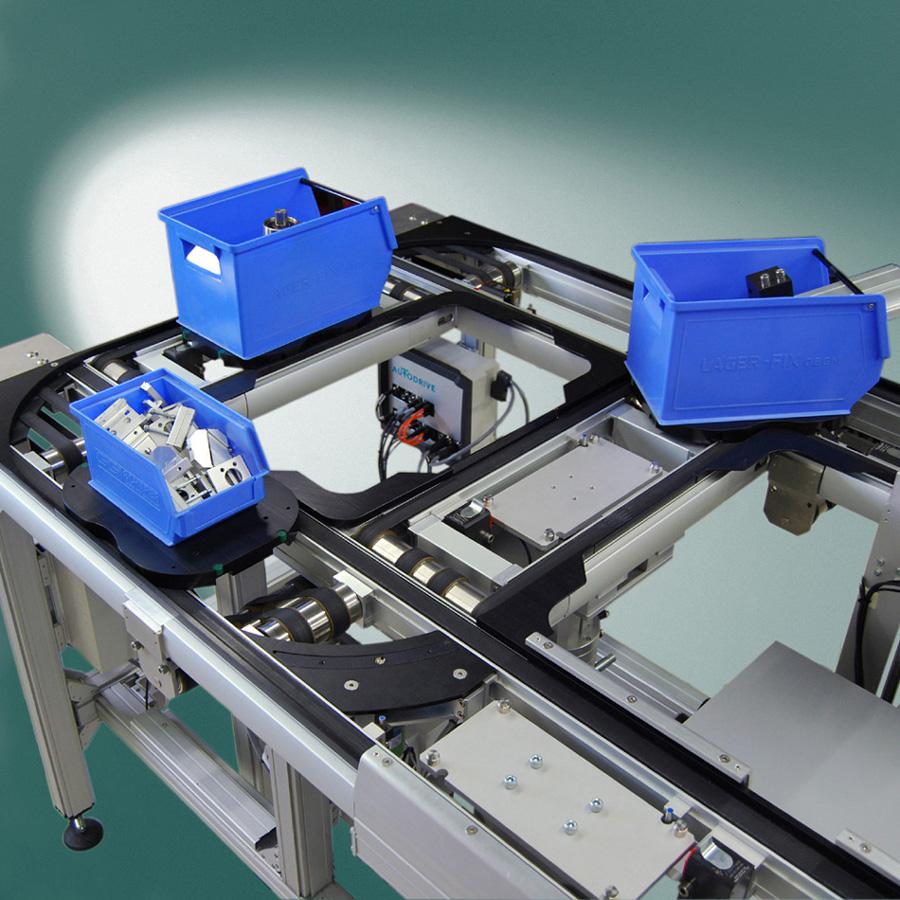 The new transport system LTplus can be deployed across the intralogistic sector.

(Derendingen, January 17, 2013) At LogiMAT 2013 in Stuttgart, Montech AG is introducing the new transport system LTplus as well as customized solutions for intralogistic based on standard conveyors.The new transport system LTplus is comprised of a double belt, which carries individual workpiece holders at a speed up to 20 m/min. The latter have a load capacity of 16,8 kg and are provided with RFID, so that they can be identified at any time, thus enabling “chaotic” operation.Fully integrated, compact drive The peculiarity of the transport system LTplus is the fully integrated and compact drive. The drive, with 60 mm diameter, is integrated in the shaft, with no protruding parts, so that it noiselessly operates the double belts that carry the workpiece holders. The motion control card of the motor runs the Autodrive software developed by Montech, so that no higher-lever control is required to manage the process. Conveyor speed, direction and acceleration can be adjusted seamlessly via software over an open fieldbus connection.The transport system LTplus is available with workpiece holders in three different widths (200, 240 and 320 mm), with electrically operated transfer gates for insertion/extraction, 90° and 180° curves, positioning and placing devices, cross removal module, lifting/rotating units, stoppers, gantry lifting units, elevators and buffers. All components can be easily adjusted thanks to the Quick-Set profile system, normally without modifying the chassis. Gianluca Aloisi, Director Sales: “LTplus is a future-oriented transport system that can be deployed across the intralogistic sector.” Customer-specific solutions Visitors at Montech’s stand in Hall 3, Stand 109, will have the opportunity to see customized intralogistic solutions based on standard conveyors. Montech is also presenting a longitudinal transfer system with removal, based on standard components. The application with conveyors, lift units and removal modules for parts extraction shows that the modular concept allowing to create individual, custom made solutions easily.Visitors will also see an application of the longitudinal transfer system combined with a vacuum conveyor to carry and sort CDs: The vacuum conveyor sorts out CDs according to predefined categories, then a closed loop transfer system carries away the CD stack.Montech AG markets basic modular components for the automation of demanding transport, assembly and production processes. In addition to conventional conveyor belts, the product range includes automation components and the Quick-Set profile system. A specialist in standard and customized transport and conveyor systems, Montech offers an ideal combination of customer-specific solutions with a high degree of standardization. Founded in 1964, the company is based in Switzerland and stands for innovation in the automation industry.Montech AG Elke Manthei Gewerbestrasse 12 CH-4552 Derendingen Phone: +41 (0)32 6815542 Fax: +41 (0)32 6821977 E-Mail: elke.manthei@montech.com www.montech.com

You can edit or delete your press release Montech at LogiMAT: new transport system for intralogistic here

12-17-2012 | Industry, Real Estate & Constr …
Montech AG
Montech: new transport system with fully integrated drive
The Swiss conveyor technology specialist Montech has developed the new transport system LTplus: its peculiar feature is the compact, fully integrated drive. The new transport system LTplus is comprised of a double belt, which carries individual workpiece holders at a speed up to 20 m/min. The latter have a load capacity of 16.8 kg and are provided with RFID, so that they can be identified at any time, thus enabling
Comments about openPR
OpenPR ist the nicest and most clearly laid out PR platform I have seen to this day. The press releases are displayed very nicely and clearly and without any unnecessary frills. The updates are fast and the finished release looks appealing and is clearly legible. Even with 16 years of experience one discovers new things from time to time. Congratulations!
Gabriele Ketterl, Director Marketing & PR, Menads