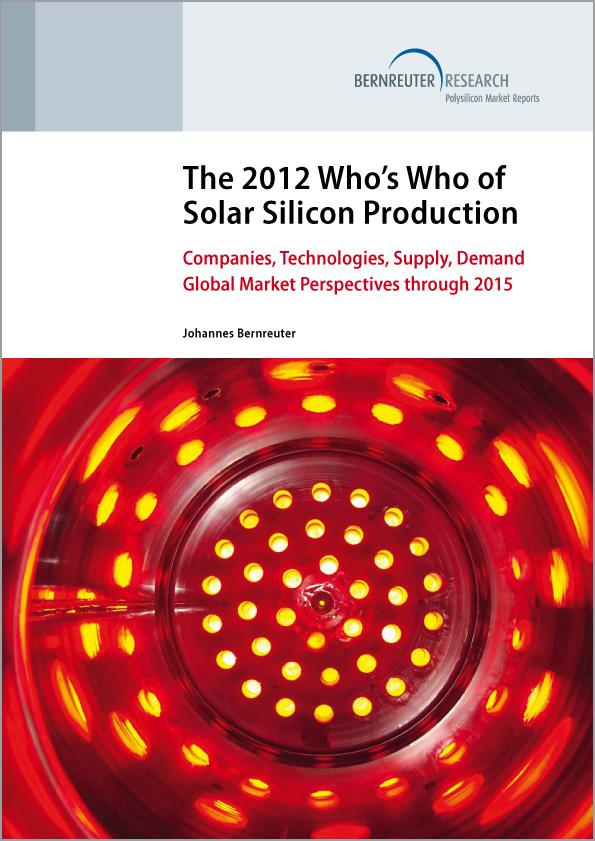 Würzburg (Germany), January 8, 2013 – The global polysilicon industry will return to the path of growth and increase its production by 6.5% in 2013, according to the latest analysis of Bernreuter Research. The polysilicon market research firm projects the global polysilicon net demand – including that of the semiconductor industry, but excluding the consumption of inventories – will amount to approximately 250,000 metric tons (MT) this year. The spot price is predicted to rebound to a level of US$20 to 25/kg by the end of 2013.Polysilicon manufacturers will profit from the slightly accelerating growth of their largest customer, the photovoltaic (PV) industry, which makes up almost 90% of total polysilicon demand. "The global PV market will pick up speed – albeit at a slower pace than we originally assumed," says Johannes Bernreuter, head of Bernreuter Research and author of the global polysilicon market report The 2012 Who's Who of Solar Silicon Production. "We now expect new PV installations to reach 35 to 37 gigawatts (GW) in 2013. China, Japan and the USA will replace Germany and Italy as the PV growth locomotives."In 2012 the polysilicon industry was plagued by overcapacities and a large inventory of 25,000 MT resulting from a production surplus in 2011. In addition, cash-strapped wafer manufacturers dumped their polysilicon stocks on the spot market in order to retain liquidity. The wave of secondary sales from wafer companies and traders accelerated the slump of the spot price: the average rate for high-purity polysilicon crashed by 47% to a record low of $15.35/kg in 2012 after it had already plummeted by 59% in 2011.Since September 2011, the severe price decay has forced about 50 polysilicon manufacturers – most of them small and medium enterprises in China – to abandon or suspend production. In the third quarter of 2012, all top producers began to bow to the price pressure as well and reduced the utilization rates of their plants. According to preliminary estimates of Bernreuter Research, the global polysilicon production volume consequently fell to approximately 235,000 MT in 2012, a drop of almost 8% from the output of 255,000 MT in 2011."Along with the large inventories and the supply of thin-film modules, those 235,000 MT were nonetheless sufficient for a newly installed PV capacity of 33 to 34 GW worldwide in 2012," says analyst Bernreuter. However, the latest shipment guidance of 13 major public solar module manufacturers points to new installations of only 30 to 31 GW. "The actual result could still be somewhat higher for two reasons: thanks to a better fourth quarter, several of these manufacturers may have exceeded their guidance, and other producers have possibly gained additional market share," explains Bernreuter. "If the markets in China and the US had a strong finish, 31 to 32 GW are possible."Although polysilicon inventories have not completely been digested yet, the spot price reached a bottom at the turn of the year. An installation rally in Japan ahead of a probable feed-in tariff cut in April, healthy demand for PV systems in China and the introduction of punitive duties on polysilicon imports to China anticipated in February will drive the spot price upwards in the first quarter.Even if China should impose duty tariffs as high as 50%, as is rumored, Bernreuter Research does not expect a strong revival of the Chinese polysilicon industry. "The manufacturing costs of most producers are still too high and the quality of their product is too low," says Bernreuter. "We assume a lot of foreign polysilicon shipments for Chinese customers will be diverted to wafer manufacturers in Taiwan and then imported as wafers or solar cells to mainland China."More details on the polysilicon, semiconductor and PV markets are provided in the current report of Bernreuter Research, The 2012 Who's Who of Solar Silicon Production. Customers praise the high information density, comprehensive market analysis and detailed technology assessment of the 100-page report. It is now available for only 990 euros instead of 1,250 euros. For more information on the report, please go to: http://www.bernreuter.com/en/shop/solar-silicon-reports/2012-edition/report-details.htmlCustomer Opinions"The report is comfortably compact with an extremely high density of information and allows targeted reading without wasting time." Jochen Schneider, CEO of Schmid Silicon Technology GmbH"The market analysis is very comprehensive and the assessment of the various technologies most informative – the perfect reference for anyone in or aspiring to enter the silicon business." Prof. Mansoor Barati, Director of the Sustainable Materials Processing Research Lab, University of Toronto"For our strategic business development, we rely on The 2012 Who's Who of Solar Silicon Production as the most detailed source of information on silicon production technologies." Jan-Philipp Mai, CEO and Founder of JPM Silicon GmbHAbout Bernreuter ResearchBernreuter Research was founded in 2008 by Johannes Bernreuter, one of the most reputable photovoltaic journalists in Germany, to publish global polysilicon market reports. As early as 2001, Bernreuter authored his first analysis of an upcoming polysilicon bottleneck and new production processes. In 2010 Bernreuter Research issued the Basic Edition of The Who's Who of Solar Silicon Production, which industry experts have praised as the most comprehensive and accurate polysilicon report on the market.Press Contact: Bernreuter Research – Polysilicon Market Reports Huttenstr. 10, 97072 Würzburg, GermanyYour Contact Partner: Johannes Bernreuter, Company Head Telephone: +49/931/784 77 81 E-mail: info@bernreuter.com