Brits are happier online shoppers than US and Canadian consumers 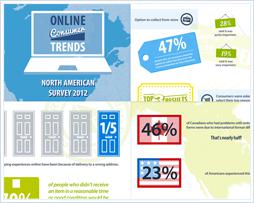 According to a survey from Postcode Anywhere of 3,000 consumers across Canada, the US and the UK found UK consumers are more satisfied with online shopping than our transatlantic cousins. Results showed that four in 10 (39 per cent) North American consumers have had a bad experience with a delivery for an item ordered online, compared with under three in 10 (27 per cent) Brits. Over the last 12 months, Postcode Anywhere surveyed a sample of consumers on both sides of the pond about their online shopping habits. Orders going to the wrong address, later delivery than expected and items not being delivered at all, all caused problems for consumers within the last year. The findings come as no surprise to Guy Mucklow, CEO of Postcode Anywhere, who says that it is reflective of an address infrastructure that is far less evolved than that of the UK, with an alarming lack of attention to the data and the quality of technology used on ecommerce websites: “While the US Postal Service address database gives very comprehensive property level coverage of the country and is easy to license, it’s fair to say that most Americans are parochial when it comes to addressing.“In fact, we found that when asked if they were concerned by poor service, although 38 per cent of US and Canadian consumers said they wouldn’t deal with a company again if they failed to deliver the product they ordered, a surprising 29 per cent would either be neutral about the situation or would purchase again. Compared to 18 per cent of UK respondents, it’s clear American consumers are almost used to receiving a bad service.”Registration and payment processes for online shopping continues to be a considerable factor in abandoning an ecommerce transaction, but is more likely to stop a UK consumer in their tracks. 37 per cent of UK respondents said that a process issue (such as lengthy forms or the whole experience taking longer than expected) would make them abandon a shopping basket, but the same factors only aggravated 23 per cent of North Americans, who identified shipping charges (76 per cent) and security (57 per cent) as their biggest concerns.Mucklow continued: “A lot comes down to the different ways in which we capture and validate address data online. While us UK consumers can very often just simply type in a few letters of any part of an address to return the right one, typical North American processes involve the verification of addresses against a reference database after the user has typed it manually. This is obviously a much more tedious way of doing things and, in the fickle manner of a typical online shopper, leads to basket abandonment and lost sales.”For a full copy of the report, please visit: http://www.postcodeanywhere.co.uk/north-american-survey-12/Postcode Anywhere supplies software and services which improve the day-to-day operations of over 8,000 organisations worldwide. Best known as a provider of address auto-fill and verification software, the company offers a range of data-driven services, including route planning, customer profiling and bank account validation. It is now the fastest-growing reseller of Royal Mail’s Postcode Address File (PAF®) and the market leader for online address auto-fill. A multi-award-winning organisation, it has also appeared in Deloitte’s European fast-growth technology company list for three years running. For more information about Postcode Anywhere, please visit www.postcodeanywhere.com.Enigma House Elgar Business Centre Moseley Road Hallow Worcester WR2 6NJ

11-07-2017 | Politics, Law & Society
Advent Messenger
Rise of the American Assassins
"The earth also was corrupt before God, and the earth was filled with violence." Genesis 6:11. Welcome to the Rampage Republic. We live in an age that can be defined as a period of violent, uncontrollable behavior. More and more tragedies are erupting as these reckless, destructive episodes of murder continue. The cycle of violence is boiling over in America. Peace, liberty and the pursuit of happiness is being critically undermined
03-24-2017 | Health & Medicine
Persistence Market Research Pvt. Ltd
North American Surgical Gowns Market
The North American Surgical Gowns Market report provides in-depth analysis of parent market trends, macro-economic indicators and governing factors along with market attractiveness as per segments. The report also maps the qualitative impact of various market factors on market segments and geographies. The global surgical apparels market is growing at a significant rate due to increasing number of surgeries, and technological advancement in the field. Some of the surgical apparels available
12-19-2013 | Energy & Environment
American Solar Electric
American Solar Announces Excellence Certifications
Two more experts at American Solar, Arizona’s leader in residential solar installation and innovation, have received the NABCEP (North American Board of Certified Energy Practitioners) certifications, indicating the very highest level of competence and professionalism in the solar energy industry. To even be considered for the certification, applicants must meet required levels of experience and training in the complex field of photovoltaic energy systems, meet OSHA (Occupational Safety and Health
02-02-2012 | Leisure, Entertainment, Miscel …
Fire & Stone
American Super Bowl Delights
Join in with the Super Bowl action and add some touches from across the pond to your life. Celebrate the highly anticipated annual sporting event with a range of American influenced scrummy pizzas at deliciously different restaurant Fire & Stone. Touch down at one of the five restaurants and experience a delightful American treat on Super Bowl Sunday. Examples from the menu: New York: Mozzarella, tomato sauce, crispy smoked bacon, garlic
07-29-2011 | Politics, Law & Society
DJS Advocacies
An American Hero Remains An American Prisoner
George Martorano remains behind bars without recognition of the lives he has saved and his service to society. He is still denied his right to resentencing. (Philadelphia, July 26, 2011) -- Today, Federal Prisoner George Martorano (ID# 12973004) informed us of a major, potentially lethal incident on a Bureau of Prisons flight from Philadelphia to Oklahoma on his way back to Coleman Federal Prison in Florida. George wrestled a handcuff
11-10-2006 | Health & Medicine
PA Hypnosis Center
Celebrating the Great American Smokeout
A free educational seminar on a guaranteed safe and effective way to stop smoking will be held in Pittsburgh. Come see us in person. Learn the method discussed in Oprah Magazine, on TV and radio. On November 16, 2006, from 6:00PM to 8:00PM a free educational seminar will be held to teach the public about how hypnosis can help people quit smoking. Attendees will learn how to kick
Comments about openPR
OpenPR ist the nicest and most clearly laid out PR platform I have seen to this day. The press releases are displayed very nicely and clearly and without any unnecessary frills. The updates are fast and the finished release looks appealing and is clearly legible. Even with 16 years of experience one discovers new things from time to time. Congratulations!
Gabriele Ketterl, Director Marketing & PR, Menads