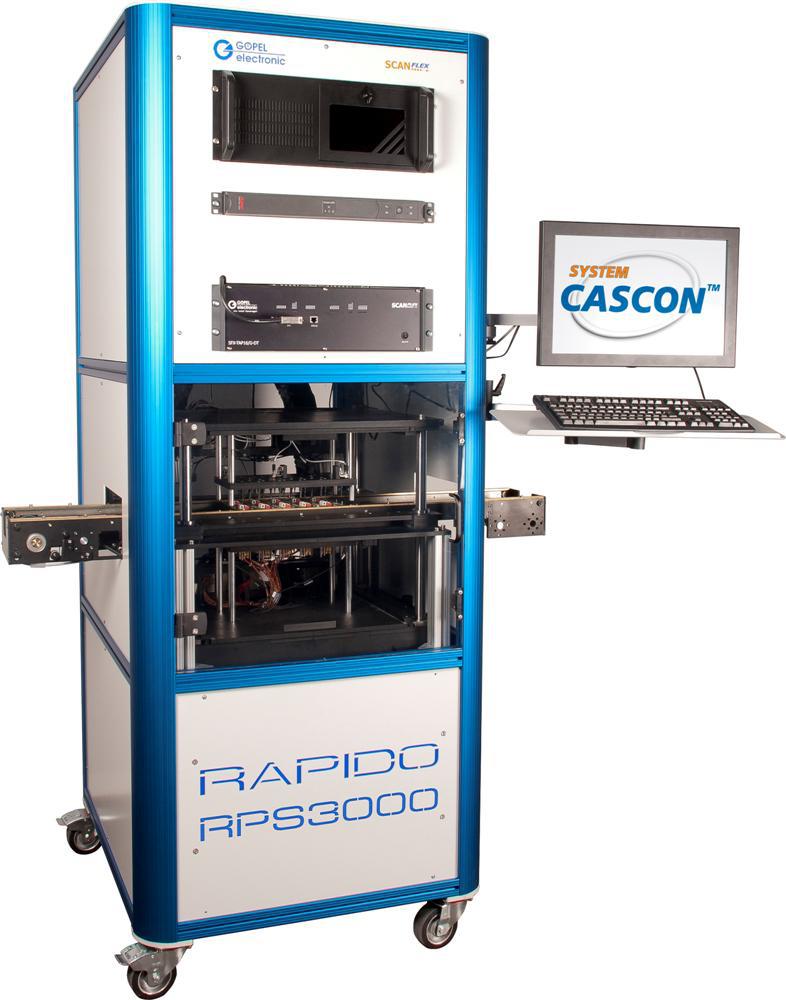 GOEPEL electronic announced the market introduction of additional RAPIDO™ series inline production systems for high-speed programming as well as board test based on the newest Embedded System Access (ESA) technologies.http://www.goepel.com/en/news/newsdetails/article/2012/11/13/new-inline-programming-system-combined-with-embedded-test.htmlThe new models named RPS3000-(x) support double-sided probing for up to 3000 nails. Non-volatile memories such as Flash, Microcontrollers (MCU) and Programmable Logic Devices (PLD) can be on-board programmed even faster and more reliably.Based on an enhanced SCANFLEX® architecture with Short Wire Interface for up to 32 sites, it is now possible to combine programming tasks with test strategies such as Boundary Scan, Processor Emulation, Chip Embedded Instruments or Functional Test. In conjunction with the patented handling mechanics the scalable overall system merges the benefits of a highly flexible programming capability with the highest throughput. Hence, utilizing RAPIDO results in a significant reduction of storage costs and total production costs.“The sales success in industry segments like automotive or industrial electronics since the product introduction six months ago impressively proves the market acceptance of our RAPIDO concept“, says Thomas Wenzel, Managing Director of the JTAG/Boundary Scan Division. “The new models are the goal-oriented extension of our inline product series, now supporting combined test and programming strategies for all Embedded System Access technologies. In addition to an increase in synergy between lab and production, this provides the means to meet the requirements of an even higher inline throughput.About the RAPIDO™ system family: RPS900-S16 was the first RAPIDO product family member, enabling probing of up to 900 nails at up to 16 sites. The new models RPS3000-S16 and RPS3000-S32 extend the capabilities for up to 3,000 nails at 32 sites. All systems are based on the utilization of advanced ESA technologies for test and programming of highly complex boards.All types of Flash devices such as NOR, NAND, eMMC with parallel or serial interface are supported. In the case of Flash that is not externally accessible via connectors, direct programming by means of probes is possible because RAPIDO features separate dynamic I/O. Additional targets are microcontrollers and all types of PLDs or FPGAs.Core elements of the RAPIDO system are the well-proven and mature software and hardware platforms SYSTEM CASCON™ and SCANFLEX®, respectively. Together with the new Short Wire Interface they provide the highest reliability and safety at maximum productivity. Furthermore, RAPIDO features various options for combination with functional board test up to 100 MHz, for customer-specific extensions, for programming via CAN, LIN or FlexRay, as well as coupling with assembly magazines and PASS/FAIL sorters.The RAPIDO systems’ distribution and support will be guaranteed through GOEPEL electronic’s globally established network of branches and selected partners. Service includes shipping, installation and maintenance of complete preconfigured turnkey solutions.GOEPEL electronic is a worldwide leading vendor of professional JTAG/Boundary Scan solutions and technology innovator of IP based instrumentation. With more than 100 product launches the company became the biggest innovator in the market within the last five years. A network of branch offices, distributors and service partners ensures the global availability of the products as well as the support of the more than 7,000 system installations. Founded 1991 and headquartered in Jena, Germany, GOEPEL electronic employs currently about 200 employees. GOEPEL electronic has continuously been ISO9001 certified since 1996 and has been honoured with TOP-JOB and TOP-100 awards for being one of the best medium-sized companies in Germany. GOEPEL electronic’s products won several awards in recent years and are used by the leading companies in telecommunication, automotive, space and avionics, industrial controls, medical technology, and other industries. Further information about the company and its products can be found on the internet at www.goepel.com.GOEPEL electronics Ltd. Unit 1A The Old Granary Westwick, Cambridge CB24 3AR/UKPhone +44-1223-858298 Fax +44-1223-257800 www.goepel.co.ukStefan Meissner press@goepel.com