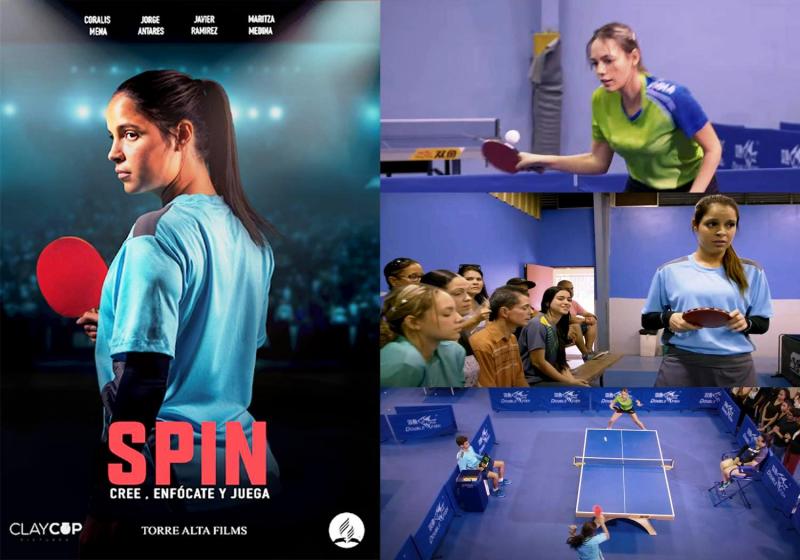 As Rome unites all into a universal confederacy and prepares the world to receive the mark of the beast, our leaders are making inspiring sports movies that make people feel good. The Seventh-day Adventist Church in Puerto Rico, with funding from the Puerto Rican Union Conference, Hope Channel Inter-America and the General Conference Communication Department, has produced and screened its first major film in the island’s largest drive-in theaters. The name of the film is called “Spin” and was written and directed by Oscar Sanchez and produced by Jonathan Lopez for the Seventh-day Adventist Church. This sports drama film tells the story of a young woman who is struggling with many problems and meets a table tennis coach who helps her change her life. Table tennis is the vehicle to convey the message of hope throughout the film. The film will not only be seen in Puerto Rico; it will have an international audience. “Spin” has been “forwarded” to the “General Conference to be dubbed into different languages.” The film is also scheduled to be featured on the Hope Channel at the end of October.We seem willing to do anything, including sports drama productions, except give the last warning message to the world. This church-funded sports movie is more in line with the hundreds of feel-good films that are inspiring and that can teach you important life lessons; but it certainly does not convey the final warning message against the beast (Rome) that God has ordained to be given at the very moment when “all nations” are drinking of the “wine of the wrath of her fornication” and while the “kings of the earth” commit “fornication with her” (Revelation 18:3).You cannot mix the sacred with the secular. You cannot mix the Three Angels’ Messages with sports drama movies. That is called religious syncretism – the blending of two belief systems into one. A new gospel is created and a new emerging Church begins. This results in the creation of a mutant gospel that’s been diluted with the elements of the world. Click to read the full story: http://adventmessenger.org/the-seventh-day-adventist-church-produces-its-first-major-sports-drama-movie-and-it-is-being-shown-in-drive-in-theaters/Contact: Andy Roman, Publisher Address: Advent Messenger, PO Box 96, Dover, OK 73734 Phone: (888) 299-2119 Website: www.adventmessenger.org Email: adventmessengers@gmail.comAbout: Advent Messenger provides news and commentary on current events, top stories, social trends and political and religious events. For more news visit www.adventmessenger.org

06-16-2020 | IT, New Media & Software
GraceSoft
GraceSoft Church Reservation Software
GraceSoft creates the easy to use church reservation system for the churches to manage bookings for a church gathering, upcoming service, events. Manage members check-ins etc An easy to use reservation software for churches to manage their members, visitors attendance, and check-ins. Also, the church administration can set the maximum capacity limits for each service or upcoming events, church gathering, etc. It is a very simple church management software, can reserve in
11-20-2018 | IT, New Media & Software
reportconsultant
Set to grow high Church accounting software market 2018 by top vendors Flock Bas …
Church Accounting Software Market is expected to grow at a Compound Annual Growth Rate (CAGR) of +10.6%. The base year considered for the study is 2018 and the forecast period considered is 2018 To 2025. Accounting software markets, such as potential top players, as well as their weaknesses and strengths. The Church Accounting Software Report also includes some useful strategies for new players in the market. While predicting the growth of
10-23-2017 | Business, Economy, Finances, B …
Press-Release
Market 2017 Church Management Software 2021
"Global Church Management Software Market 2017-2021" The Report covers current Industries Trends, Worldwide Analysis, Global Forecast, Review, Share, Size, Growth, Effect. Description- Church management software solutions are used by churches to automate their daily operations. Some of the major functionalities of these solutions include attendance tracking, membership management, and report generation. Churches can also use management software to track the growth of their congregations. The church management software license revenue includes both
10-10-2017 | Leisure, Entertainment, Miscel …
Advent Messenger
When Pastors Declare War Within the Church
Postmodernism has set its sights against all truth. An all out assault against the gospel of Jesus, who is the “way, the truth and the light” (John 14:6) is the target. This war mentality is the very imagery that a Seventh-day Adventist Pastor from the Pacific Northwest recently gave in the Gleaner Now, the official publication of the North Pacific Union Conference of Seventh-day Adventists. In an article entitled A Church
06-09-2017 | IT, New Media & Software
Report Hive
Global Church Management Software 2017-2022
Report Hive Market Research Released a New Research Report of 102 pages on Title "Global Church Management Software 2017-2022" with detailed Analysis, Forecast and Strategies. Church programming is any sort of PC programming particularly intended for use by a congregation. There are managerial bundles customized to deal with participation databases and funds, and furthermore venerate introduction projects to produce pictures for video projectors. For More Information Request Research Sample: https://www.reporthive.com/request-sample.php?id=874037 This report
04-03-2017 | Health & Medicine
Nineteen Church Road
Nineteen Church Road
Nineteen Church Road is a dentist in Hoveton in Norfolk. Everyone at the practice is dedicated to providing the very best in dental healthcare for all the family. They believe that each person is a unique and special individual who deserves the very best treatment, and they are committed to giving you just that. The dental practice in Hoveton offers dental implants, sedation, smile makeovers and dentures. In addition to cosmetic dentistry
Comments about openPR
OpenPR ist the nicest and most clearly laid out PR platform I have seen to this day. The press releases are displayed very nicely and clearly and without any unnecessary frills. The updates are fast and the finished release looks appealing and is clearly legible. Even with 16 years of experience one discovers new things from time to time. Congratulations!
Gabriele Ketterl, Director Marketing & PR, Menads