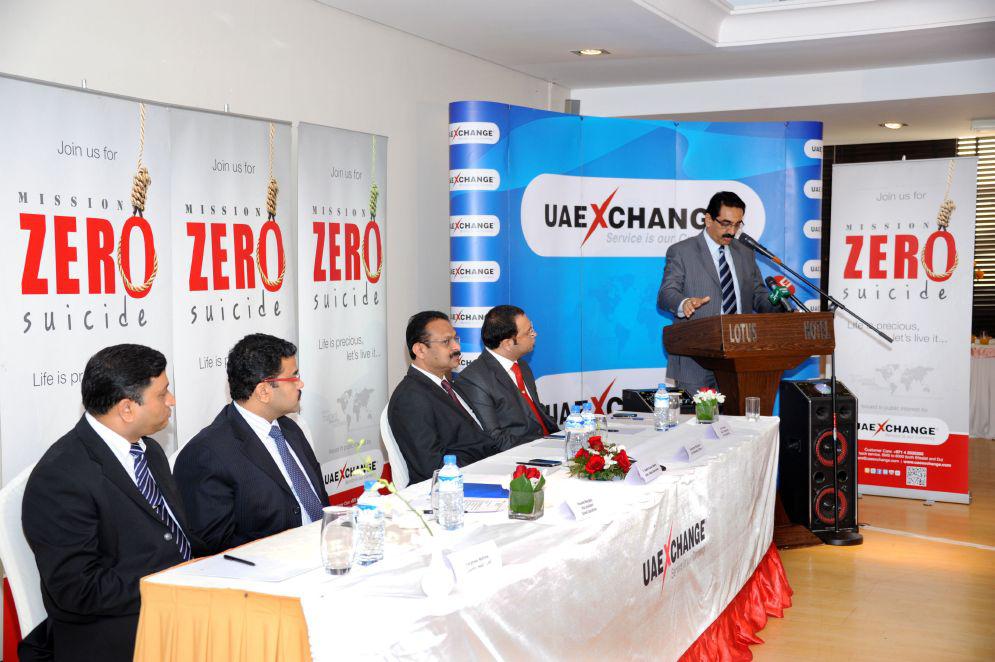 Officials at the Press Conference

The six-month campaign, across the UAE, counselled thousands of distressed expatriates, branding the initiative a success. The message reached out to over 1,000,000 people.“If we could positively influence at least a few desperate expatriates from taking that extreme step, we would consider Mission Zero Suicide campaign, a success.” said Mr. Y. Sudhir Kumar Shetty, COO – Global Operations, UAE Exchange. He was speaking on the occasion of the culmination of the Mission Zero Suicide, the UAE Exchange campaign for counselling those expatriates, who had a tendency to resort to suicides due to financial, emotional and psychological issues. The brainchild of the leading global remittance and foreign exchange brand, Mission Zero Suicide campaign was conducted, across the UAE, for a period of six months.“Expatriates leave their homeland in search of better options for livelihood. Though foreign land promises prosperity back home, it also offers loneliness and unnecessary indulgences for an expatriate, who takes the path to depression, ultimately taking that extreme step. As per various surveys, this tendency was more prevalent among distressed expatriates in the UAE. Many Embassies and the UAE Government were taking various measures to address the issue. Aligning with their vision, UAE Exchange too contributed its bit with Mission Zero Suicide. So far the results have been quite impactful for us to take this campaign to the next level.” added Mr. Sudhir Shetty.Mr. Promoth Manghat, Vice President – Global Operations, UAE Exchange, said, “Propagating the message of good mental health and physical well being of every expatriate is our aim through this campaign. To achieve it we took the help of expert counsellors, who counselled those, who had those extreme tendencies. We are thankful to the UAE Government, various consulate officials and professional counsellors for their support and guidance in making our efforts effective. The encouraging results go on to show the sincerity of the initiative and the trust the expatriates bestow on the brand UAE Exchange.”Mission Zero Suicide campaign was initiated in answer to the rise in the expatriate suicide rate in the UAE. This global money transferrer ran a signature campaign in which over 200,000 people, including celebrities and eminent personalities, participated by signing up their support to this unique initiative which reached over 1,000,000 people. As part of the campaign, inspiring videos were screened in 4800 labour camps, 8000 shops, 380 corporate offices reaching its 16000 staff members, public gatherings etc., bringing awareness on personal finance management and stress management, since financial troubles and stress were cited as the reasons for most of the suicides or attempts to suicide.The global money tranferrer has always been trusted for its various initiatives, be it for better service offerings, promotions or corporate citizenship initiatives. The remittance brand has always strived to reduce the hassles of the expatriate community living in the UAE.About UAE Exchange UAE Exchange is a leading global remittance and foreign exchange brand, based in UAE, with over 630 direct offices in 30 countries across five continents. With ‎correspondent banking relationship with more than 150 global banks, and associations with ‎ leading global brands, UAE ‎Exchange provides ‎unmatched service to over 3.5 million customers, worldwide. In UAE, the ‎brand has a leading presence with a network of over 122 branches covering all the Emirates.UAE Exchange Lahcen ATERTA Manager Media Relations Al Saigh Building, Hamdan Street, PO Box 170, Abu Dhabi, UAE Telephone: +971-2-4945480 aterta.lahcen@uaeexchange.com