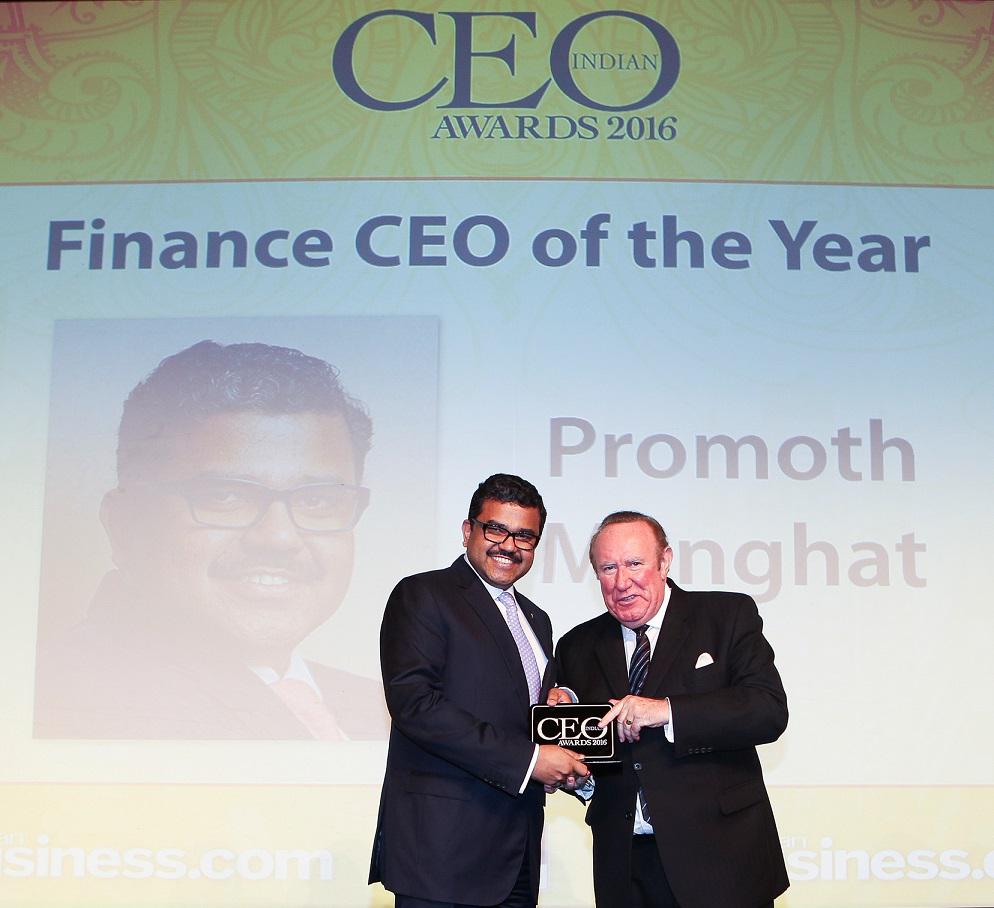 Mr. Promoth Manghat, CEO, UAE Exchange, is named the Finance CEO of the Year at Indian CEO Awards 2016, in recognition for business excellence and his achievements over the course of the past year as the CEO of UAE Exchange. Promoth received this award for his outstanding contributions in the progress of UAE Exchange. He has been instrumental in introducing various transformational processes in the organisation and instilled a passion for excellence in its culture, transforming the remittance brand into a global entity with high quality standards. UAE Exchange has always attempted to be innovative, revolutionising its products to enhance customer experience. Today it offers a host of services in line with the growth in sophistication of the industry. Going forward, UAE Exchange envisions being the most admired brand in money transfer, foreign exchange and payment solutions. Toward this, various technological initiatives are taken up, emphasising on digitalisation, thus transforming UAE Exchange. Promoth’s initiative in driving this transformation has gained him this recognition today. Promoth had also led that core team, which enabled the group to acquire Travelex, the global foreign exchange specialist. The entire deal, including finance, obtaining approvals from multiple regulators from various countries etc., was completed in a matter of few months. Their efforts won the team ‘Deals of the Year Award’ from the Banker magazine. This penchant for the best resulted in various milestones over the course of past one year, which in turn won him the Finance CEO of the Year Award. Mr. Andrew Neil, Chairman, ITP Publishing, the BBC broadcaster and former Sunday Times editor, did the honours at the ceremony for which His Excellency T. P. Seetharam, Ambassador of India to the UAE, was the Guest of Honour. Earlier Promoth had been bestowed with Excellence in Finance and Profession Award by the Institute of Chartered Accountants of India (ICAI), Abu Dhabi Chapter, UAE. This event organised by Arabian Business and CEO Middle East, was held at Hotel Conrad, Dubai on 29th February, 2016. It was attended by eminent personalities, special invitees and the Media.UAE Exchange has close to 800 branches in 31 countries and serves over 13.2 million customers, handling six per cent of the total global remittances. Correspondent relationship with over 140 global banks adds to the might. At the branches, customers can avail instant bank transfer, overseas cash payouts, currency exchange, salary collection, bill payments, mobile top-ups, secure savings options, travel card etc. Over 9000 professionals, representing 40 nationalities, strive for excellence and this penchant for quality has won the brand ISO certifications and other global awards.Lahcen ATERTA Manager Media Relations UAE Exchange Centre LLC Al Saigh Building, Hamdan Street, PO BOX 170, Abu Dhabi, UAE Telephone: +971-2-4945480 aterta.lahcen@uaeexchange.com

04-28-2016 | Business, Economy, Finances, B …
UAE Exchange
UAE Exchange India Bags the Prestigious Golden Peacock Business Excellence Award …
Dubai, April 2016: UAE Exchange India was recently conferred the prestigious Golden Peacock Award for Business Excellence by the Institute of Directors. The award ceremony was held at Hotel Meydan in Dubai, United Arab Emirates. His Highness Sheikh Nahyan Bin Mubarak Al Nahyan, Honourable Cabinet Minister of Culture & Knowledge Development, Government of UAE, presented the award to the Chairman of UAE Exchange, Dr B R Shetty, and the Managing
03-11-2016 | Business, Economy, Finances, B …
UAE Exchange
UAE Exchange Recognized As A Great Place to Work
Working for an organisation that offers a work-life balance is a blessing but working for an organisation that rewards and helps improve skills of its team is a richer blessing. One such organisation that inspires and motivates its staff is UAE Exchange, the leading global remittances, foreign exchange and payment solutions brand. In a survey conducted by Great Place to Work, UAE Exchange ranked among the top 20 best employers
10-29-2013 | Business, Economy, Finances, B …
UAE Exchange
UAE Exchange global operations turns 33
Established in 1980 in Abu Dhabi, UAE. Currently active in over 30 countries across five continents. Over 700 branches make it the largest global network among remittance brands. “Trust turns 33!” exclaimed Mr. Y. Sudhir Kumar Shetty, COO – Global Operations, UAE Exchange. “We have been an active player in the remittance industry for over three decades now. We could earn the trust of our customers, partners and regulators due to
02-08-2013 | Business, Economy, Finances, B …
UAE Exchange
UAE Exchange accredited with TISSE 2012 for excellence in Customer Service
UAE Exchange accredited with TISSE 2012 certification by The International Customer Service Institute (TICSI), United Kingdom. UAE Exchange is the first remittance brand in the Middle East to attain the ‘International Benchmark’ excellence level in TISSE 2012. The quest for excellence has helped UAE Exchange, the leading global remittance and foreign exchange brand, to be TISSE 2012 certified. This quest enables one to realise the core strength and is the driving