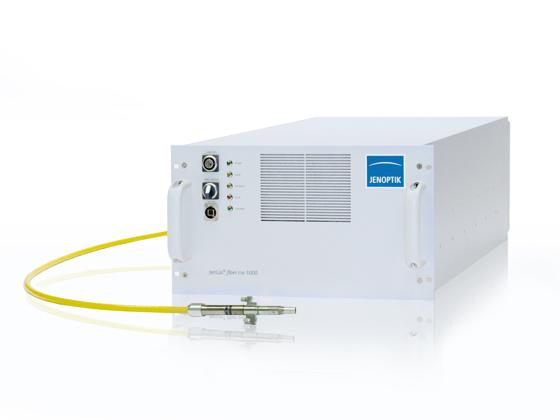 The first consignments of the new Jenoptik fiber lasers have been delivered. They went to an Asian client where they will be used for high-speed metal cutting. Further high power fiber lasers will be delivered till the end of this year. The lasers had previously passed a comprehensive and demanding series of application tests with flying colors. The fiber laser which Jenoptik also successfully showcased at the EuroBLECH 2012 trade fair at the end of October this year complements the range of excellent lasers, offered by the Jenoptik’s Lasers & Material Processing division for use in industry, medical technology and security sector. Jenoptik has control over the entire value-added chain of laser material processing – from special optics to components and laser sources up to complete laser machines. The JenLas® fiber cw 1000 has an output power of 1000 Watts and guarantees fast processing as well as consistent high productivity, simultaneously maintaining a high processing quality in the corresponding, primarily industrial applications, in particular for cutting and welding of the various metals. Unlike other manufacturers, Jenoptik’s know-how in the field of diode lasers, pump sources for fiber lasers, the laser sources themselves as well as the processing optics offer a unique, all-round environment. Due to its in-depth understanding of each technological stage in laser engineering, combined with comprehensive experience covering all aspects of the respective applications, Jenoptik guarantees an easy, seamless and flexible integration of the lasers into the corresponding process cycles of its customers worldwide. Like disk lasers, fiber lasers are a form of solid-state lasers. The laser light is passed through the fiber and is guided in its core. It is significantly boosted, because of the very long interaction period. The advantages of the fiber lasers include a simple, compact and maintenance-free design, energy efficiency, excellent laser beam quality and a long lifetime. The fiber laser market is growing at a faster rate compared to the markets for other laser types. The characteristics of fiber lasers make them an attractive alternative for use when modernizing existing production facilities. About the Jenoptik Group As an integrated optoelectronics group, Jenoptik operates in five divisions: Lasers & Material Processing, Optical Systems, Industrial Metrology, Traffic Solutions and Defense & Civil Systems. Its customers around the world primarily include companies in the semiconductor and semiconductor equipment industries, the automotive and automotive supplier industries, the medical technology, security and defense technology industries as well as the aviation industry. The Group was created out of the former Kombinat VEB Carl Zeiss Jena in 1991, as a result of the German reunification. The Jenoptik Group headquarters are in Jena (Thuringia). In addition to several major sites in Germany Jenoptik is represented in nearly 70 countries. JENOPTIK AG is listed on the Frankfurt Stock Exchange and included in the TecDax index. The Group has more than 3,100 employees all over the world and generated sales of approx. 543 million euros in 2011. In the Lasers & Material Processing division Jenoptik has control of the entire value-added chain of laser material processing and is one of the leading providers – from component through to complete system. In the area of lasers, Jenoptik has specialized in high-quality semiconductor materials and reliable diode lasers as well as innovative solid-state lasers, for example disk and fiber lasers. In the area of high-power diode lasers, Jenoptik is acknowledged worldwide as a leader in quality for high-power diode lasers. These laser sources are used, among other things, in the areas of laser material processing, medical technology and show & entertainment. In the area of laser processing systems Jenoptik develops laser systems and machines that are integrated into production facilities for customers as part of their process optimization and automation. These systems enable them to work with plastics, metals, glass and thin-film solar cells with maximum efficiency, precision and safety. JENOPTIK l Lasers & Material Processing Marketing & Communications Denise Thim Goeschwitzer Strasse 29 07745 Jena, Germany Telephone: +49 3641 65-4366 Email: denise.thim@jenoptik.com www.jenoptik.com/lm