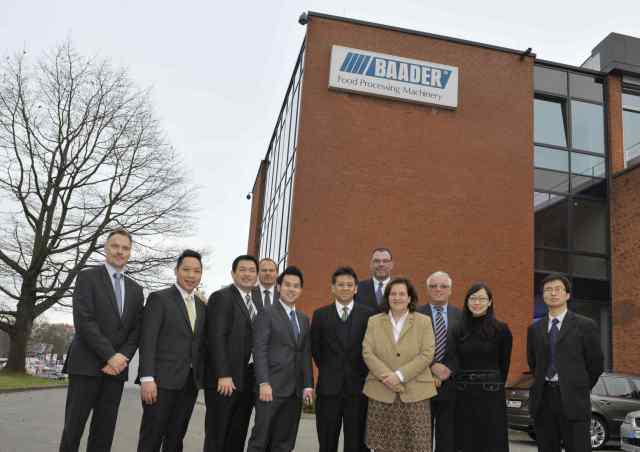 Lübeck, 14th November 2012. Baader Group of Companies under the lead of Rudolf Baader Norddeutsche Maschinenbaufabrik GmbH & Co KG was one of the targets of Thailands No. 1 in the Food & Agrobusiness sector on the business mission to Germany this year. Organized by Berlin`s German Global Trade Forum, the Royal Thai Embassy, Thai Trade Office Berlin and the Trade Advisor of Thailand in Germany the delegation of CP (Charoen Pokphand Group) payed great attention in new tech and state of the art food processing machinery made in old Germany. The Charoen Pokphand Group (CP) is a Thai-multinational conglomerate with core businesses in agriculture, the food industry, retail and telecommunications. Established in 1921, CP employs more than 280,000 employees, invested worldwide in 15 countries already and generates annual sales of over 33 billion U.S. dollars and 15% of them from the food processing. CP is the world's largest producer of animal feed and shrimp, and a leading producer of poultry. Reason enough to visit Baaders headquarters in Germany. The Baader Group and its expertise in fish and poultry processing, separator technology, weighing and sorting, as well as software solutions is one of the strongest and most innovative business partners in the global food industry. Today, some of the largest poultry processing companies are located in Thailand and thus contribute their part to ensure that Thailands “trade mark” "Kitchen of the World" remains true. In the poultry division, Baader Group and it`s subsidiary Linco has realized 8 larger projects in Thailand already. Strategic cooperation in the emerging markets in Asia, Pacific. Africa and the Americas was one of the topics of discussion and the presentations made. The senior representative of the Charoen Pokphand Group, Vittavat Tantivess, Executive Vice President and Vison Tepasarn, Vice President, got a fascinating insight into the technology of a still family-owned company with a long tradition of at least more than 70 years. Baader and the LINCO subsidiary together already count for 150 years experience in the fish and poultry processing. One of the hard facts for the regulations made in Europe to use the Baader processing standards as guidelines. Petra Baader, President, CEO & Consul of Norway in Lübeck about the visit: "It is a great honor for us to welcome such a significant delegation from Thailand in our home town and to be allowed to present the Baader-quality here were our success story began. We are also honored to join the Kingdom of Thailand as the "Kitchen of the World" in the automation in the food industry with our know-how of almost 150 years of experience in food processing. Baader is specialized in the construction of machines and processing lines for fish, poultry and meat processing. In addition to the dominance in fish processing machines, it is the third largest provider globally in poultry processing machines. The company, based in Schleswig-Holstein uses the latest production technology and is a developer as well. R & D and education of staff have a long tradition. The precise fabrication of thousands spare parts ensures the highest standards. Food safety, liability and strategic visions are the basis of Baaders global business approach. So is CPS. Thailands strategy for the next decade is to enter into new markets with new products based on top quality, food safety and advanced technology. The German market for machines and tools is a first address to implement that. Contact to Baader or CP : German Global Trade Forum Berlin Referat Presse- und Öffentlichkeitsarbeit Department P & R Burggrafenstr.3 10787 Berlin Tel. 030-212486-0 Fax. 030-2185432 email: Berlin@germanglobaltrade.de The German Global Trade Forum Berlin promotes investment, trade and business cooperation.

You can edit or delete your press release CP Group: Kitchen of the World“ visits market leader Baader in food processing Lübeck here