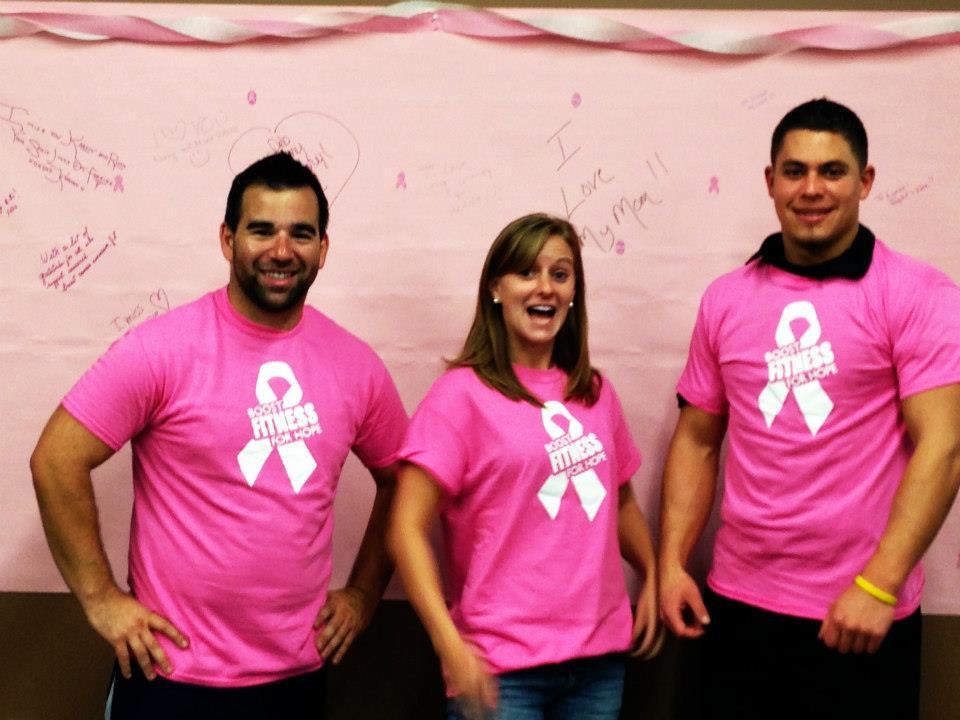 NORTHBORO, Mass., Nov. 8, 2012 –Boost Fitness, the area’s premier independent fitness center, today announced that it raised $1,300 for the National Breast Cancer Foundation during “Boost Fitness for Hope” events held in October.All three Boost Fitness locations – in Northboro, Hudson and Westford -- participated. “Breast cancer is an important cause for our members and that makes it an important cause for us,” said Mark Federico, owner of Boost Fitness. “While this was the first time we raised funds for breast cancer, we hope to have similar events annually.”“Boost Fitness for Hope” events included two “pink rides” and a male-only power class. Participants in “pink rides” each provided a $20 donation in exchange for an hour-long spin class. The first “pink ride” was so popular, a second was added.The group power class is held regularly at Boost Fitness several times a week; it is open to both men and women, but is especially popular among women. Those who attended the male-only class made donations. Boost Fitness also purchased 300 pink T-shirts with “Boost Fitness for Hope” printed on them. It sold half of them and gave away half to participants, then donated the proceeds.To further raise awareness, Boost Fitness also created a “Wall of Hope” and a video, which it posted on its Facebook page and on You Tube. “We started hearing stories of survivors, members who had lost family and friends, and those currently battling cancer,” Federico said, “so we put a large piece of paper on the wall. a ‘Wall of Hope,’ where people could post their stories – or just remember someone.”He added that Boost Fitness greatly increased the number of “likes” on its Facebook page as a result of “Boost Fitness for Hope.”Boost Fitness of Northboro, Mass. (www.myboostfitness.com) is the area’s premier independent fitness center. Boost Fitness offers individualized, group and semi-private fitness training at fitness centers in Northboro, Hudson and Westford, Mass. The fitness centers are open to members 24 hours a day.Mark Federico Boost Fitness 79 West Main St. Northboro, MA 01532mfederico@myboostfitness.com 888-845-5072

You can edit or delete your press release Boost Fitness Raises $1,300 for Breast Center Foundation here

01-19-2011 | Sports
Boost Fitness
Boost Fitness Introduces Boost Baseball For Year-Round Indoor Training
HUDSON, Mass., Jan. 19, 2011 – Baseball in winter? Boost Fitness, the area’s premier independent fitness center, today announced the opening of Boost Baseball, which will offer year-round personal instruction, hitting and pitching tunnels, and other programs for baseball enthusiasts of all ages and levels of expertise. Boost Baseball, 312 Main St., which opens on Jan. 24, 2011, is next door to the Hudson Boost Fitness club, so parents can work out

04-10-2019 | Health & Medicine
Hope Charities
Hope Charities to Hold HOPE Gala Fundraiser for Individuals with Chronic Illness
-FOR IMMEDIATE RELEASE- Hope Charities to Hold HOPE Gala Fundraiser for Individuals with Chronic Illness NEW ORLEANS, LA, APRIL 9, 2019—Hope Charities presents its HOPE Gala, a celebratory event aimed to raise funds for families in medical crises caused by chronic illness. The Masquerade Ball benefiting Hope Charities will offer live entertainment, delicious cuisine and a memorable experience for all who attend. The HOPE Gala will be held at The Jung Hotel and
06-25-2018 | IT, New Media & Software
The Novita Group Pty Ltd
Blockchain Hype vs Hope
Blockchain leader, cloudyBoss finds the all-important middle ground SYDNEY, AUSTRALIA, 25 June 2018 History is punctuated by innovations that were, at the time, thought impossible including waves of trend-setting development that no one thought would last. Hard-fought benchmarks were established then casually surpassed, like just another personal best. From the industrial age onwards, innovation has relentlessly shifted the world forward, shocking, whilst empowering, the masses. Nowhere has this been more
03-14-2016 | Associations & Organizations
HOPE Clubhouse
HOPE Clubhouse grows community with Permablitz
Permablitz is coming to Hope Clubhouse of Southwest Florida on Sunday, March 20 from 9:30 - noon, representing a collaborative community effort to create a sustainable, edible landscape that will provide nutrition, wellness and an enhanced sense of purpose to Clubhouse members. Hope Clubhouse, located at 3602 Broadway in Fort Myers, is a community of support for people living with mental illness, and the new Garden of Hope will be
04-25-2012 | Business, Economy, Finances, B …
Destimoney Enterprises Pvt. Ltd
Housing Industry Full Of Hope
Monthly volume has been declining for over a year now; it is already touching a nearly 31-month low, thanks to hardening interest rates and unaffordable property prices. Correction is expected in the industry, but there is another perspective to it. No increase in property prices is also a correction. The property rates have been rising but it is not corresponding to the increasing inflation rate, which is a good sign.
10-27-2011 | Energy & Environment
Greenstream TV
Hope for the indigenous Amazon tribes
The indigenous people left on our planet hold an ancestral link to the history of what was before the development of cities like Rio and Sao Paulo. Their customs have stayed with them throughout the years and today they continue to live peacefully within the Amazon. I’ve always been intrigued by their way of life; the language, their day to day routine, what they do for leisure? But their treatment lately
10-29-2010 | Health & Medicine
Parkinson Research Foundation
Parkinson`s Disease:New Hope Educational Conference
PARKINSON’S DISEASE: NEW HOPE EDUCATIONAL CONFERENCE Become knowledgeable about the advancements in surgery The Parkinson Research Foundation is proud to announce that Dr. James Schumacher will be speaking about advances in surgery at our fourth annual New Hope for Parkinson’s conference on November 1st in Boca Raton. Dr. Schumacher is an internationally known expert in the field of neurosurgical treatment of Parkinson’s disease and movement disorders. He has an extensive background and
Comments about openPR
OpenPR ist the nicest and most clearly laid out PR platform I have seen to this day. The press releases are displayed very nicely and clearly and without any unnecessary frills. The updates are fast and the finished release looks appealing and is clearly legible. Even with 16 years of experience one discovers new things from time to time. Congratulations!
Gabriele Ketterl, Director Marketing & PR, Menads