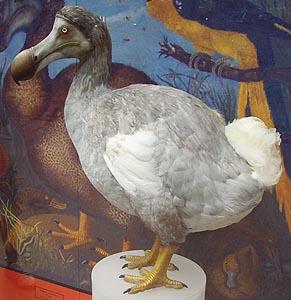 Dodo Bird article by the Kovels

Cleveland Ohio - July 16, 2007 – Once again predicting trends in antiques and collectibles, the Kovels have hit one out of the park. Following a recent story in “Kovels Komments” on the popularity of Dodo bird related collectibles, Reuters reported late last week that the ultimate Dodo collectible had been discovered. The news service said, "The remains of a Dodo were found in a cave beneath bamboo and tea plantations in Mauritius." The discovery was made earlier in June, but the location was kept secret until the skeleton was removed from the cave. The newly discovered remains will, no doubt, rekindle the interest of Dodo aficionados around the world. As the Kovels reported, although the bird has been extinct since 1681, there is a great deal of interest around the world from collectors who have followed the tragic history of this fascinating, flightless bird. The newly discovered skeleton will only inspire more people to pursue Dodo collectibles. There are few actual Dodo remains in storage or available on public view, making this recent find even more valuable. There are remains of one foot and two heads still known, plus about 20 bones found in the past few years. The American Museum of Natural History in New York City is said to have a complete skeleton of a single bird. But any realistic dodo in a museum that has skin and feathers is the work of an artist. The people on Mauritius have made Dodo souvenirs for years, including stuffed toy dodos, wooden or glass birds, sheet music of songs with dodo in the lyrics and, of course, anything showing the “Alice in Wonderland” characters. Other examples of Dodo collectibles can be found in vintage art and antique ceramics including this piece by Edris Eckhardt (1907-1998) WPA figurine of Alice’s friends the White Rabbit and the Dodo (see: http://www.kovels.com/newspics/eckhardt-dodo-snippet.jpg). The famous Cleveland glass and ceramic artist made the Dodo’s feathers beige and blue. The Dodo may be extinct, but the legend of the Dodo lives on in a myriad of collectibles, art and literature. To view some more recent prices for Dodo collectibles check out the entries in the Kovels online price guide: http://www.kovels.com/quick_lists/ Contact Info: H. Makela hmakela@kovels.com About the Kovels Ralph and Terry Kovel are the authors of more than 95 books about collecting and antiques, including the best-selling annual price guide "Kovels’ Antiques and Collectibles Price List.” Hailed by Parade magazine as "the duke and duchess of the antiques world," the Kovels publish "Kovels on Antiques and Collectibles" (an award-winning newsletter) and write a syndicated weekly newspaper column distributed to more than 150 newspapers. They appeared weekly on the HGTV program "Flea Market Finds with the Kovels.” Their popular website with FREE price information is www.kovels.com. The Kovels' newest book is "Kovels' American Collectibles, 1900 to 2000,” published by Random House and available July 17, 2007, wherever books are sold and online at: http://www.kovels.com/KAC. Contact Information: H. Makela hmakela@kovels.com Kovels.com Cleveland, Ohio

01-29-2009 | Fashion, Lifestyle, Trends
Kovels.com
Kovels on Antiques and Collectibles February 2009 Issue Released
Cleveland, Ohio - January 23, 2009 – The February 2009 issue of Kovels on Antiques and Collectibles newsletter is now available in print and online. With many collectors tightening their belts, knowing what something is worth or how much to pay for an antique or collectible is more important than ever. The 12-page, color-illustrated newsletter is packed with information that will help collectors learn the value of their treasures. Picture-price reports
12-17-2008 | Arts & Culture
Kovels.com
Kovels' Top 20 Collectors' Searches for November 2008
Kovels.com, the Web's largest free price guide for antiques and collectibles, today released its list of the top 20 searches for November 2008. Cleveland, Ohio, December 17, 2008 -- Kovels.com today released its list of the top 20 searches for November, 2008. The Kovels' top 20 list is based on the results of hundreds of thousands of searches that took place on their website during the last month. With over 600,000
03-25-2008 | Advertising, Media Consulting, …
Kovels.com
Ralph & Terry Kovel will be guest speakers at the Realtors Home & Garden Show in …
Cleveland, Ohio - March 18, 2007 - Ralph and Terry Kovel who have been hailed by Parade magazine as the "duke and duchess of the antiques Hi DiHi Dipworld," will be at the antiques and art show sponsored by Milwaukee Public Television (MPTV) friends. They will be signing their latest book, Kovels' Antiques and Collectibles Price List 2008, from noon to 1pm, when the Kovels will give an hour long
09-12-2007 | Leisure, Entertainment, Miscel …
Kovels.com
A new special report on how antique collectors and others should prepare for a d …
Cleveland, Ohio – September 11, 2007 – The Kovels today released their new special report on dealing with disaster, “How To Protect Your Collection From Theft, Fire and Natural Disasters and How To Handle a Disaster If It Strikes.” The 36-page report covers evacuation plans, emergency kits, what information you need about insurance policies and claims, theft and fire prevention, clean up after a fire or natural disaster, and more. The

02-06-2019 | Advertising, Media Consulting, …
HTF Market Intelligence Consulting Pvt. Ltd.
Tablet Pouch Market Is Booming Worldwide | Otterbox, Apple, Amzer, MOKO, DODO ca …
A new business intelligence report released by HTF MI with title "Global Tablet Pouch Market Research Report 2019" has abilities to raise as the most significant market worldwide as it has remained playing a remarkable role in establishing progressive impacts on the universal economy. The Global Tablet Pouch Market Report offers energetic visions to conclude and study market size, market hopes, and competitive surroundings. The research is derived through primary
01-14-2019 | Fashion, Lifestyle, Trends
qyreports
Color Cosmetics Market 2019-2026 Gaining with Effective presence of key players …
Cosmetics have been in use for thousands of years. The absence of regulation of the manufacture and use of cosmetics has led to negative side effects, deformities, blindness, and even death through the ages. Examples are the prevalent use of ceruse (white lead), to cover the face during the Renaissance, and blindness caused by the mascara Lash Lure during the early 20th century. The research report titled, Global Color Cosmetics Market,
01-07-2019 | Fashion, Lifestyle, Trends
Wise Guy Research Consultants Pvt Ltd
Colour Cosmetics 2018 Global Market Key Players – MAC Cosmetics, RMK, Clarins, …
Colour Cosmetics Market 2018      Wiseguyreports.Com Adds “Colour Cosmetics – Global Market Growth, Opportunities, Analysis Of Top Key Players And Forecast To 2023” To Its Research Database. Description:  The Colour Cosmetics market revenue was xx.xx Million USD in 2013, grew to xx.xx Million USD in 2017, and will reach xx.xx Million USD in 2023, with a CAGR of x.x% during 2018-2023. Based on the Colour Cosmetics industrial chain, this report mainly elaborate the definition, types, applications and
09-05-2018 | IT, New Media & Software
Research N Reports
Global virtual reality cardboard Market 2018 Latest Advancement and Growth with …
Probably the most ongoing advancements in the worldwide virtual reality cardboard showcase have made it vivacious for the huge players to altogether comprehend the market remembering the true objective to create compelling business strategies. Virtual reality (VR) cardboards include Google cardboards and other VR headsets that are based on the design specified by Google. A VR headset can be made up of cardboard, plastic, wood, or aluminum and requires the
11-29-2012 | Arts & Culture
Ketterer Kunst
World Premiere - Who knows Dodo?
Munich, 3 November, 2012, (kk) – Very soon the question will be: Who doesn't know Dodo? She's from Berlin, her œuvre has to be mentioned in one breath with works by Otto Dix, Tamara de Lempicka, Jeanne Mammen and Christian Schad. So far she hasn't appeared on the art market, but that's going to change on 8 December: “We are very proud of celebrating a world premiere with “Wedding auf dem
05-09-2011 | Advertising, Media Consulting, …
Dealaboo.com
Dodo shells for handheld devices stylish in look, sturdy in form
Though they lately come in the hands of lovers of hi-tech gizmos, their overnight leaps into the discerning hands of celebrities and film stars have made many enviable. They are none other than Dodo cases artistically hand-made by artisans in the hilly city of San Francisco. Characterized by flexibility, fit-to-device, load sustainability, elegant exteriors, and durability Dodo cases are crafted for iPad, iPhone, blackberry playbook, kindle, and tablet. Behind the company’s
Comments about openPR
We publish our press releases on openPR.de because we like people who are "open" - just like us.
Frank Obels, CEO, INCONET - Informationssysteme, Communication und Netzwerkberatung GmbH