Why Is Urban Youth Opting For Micromobility Services? 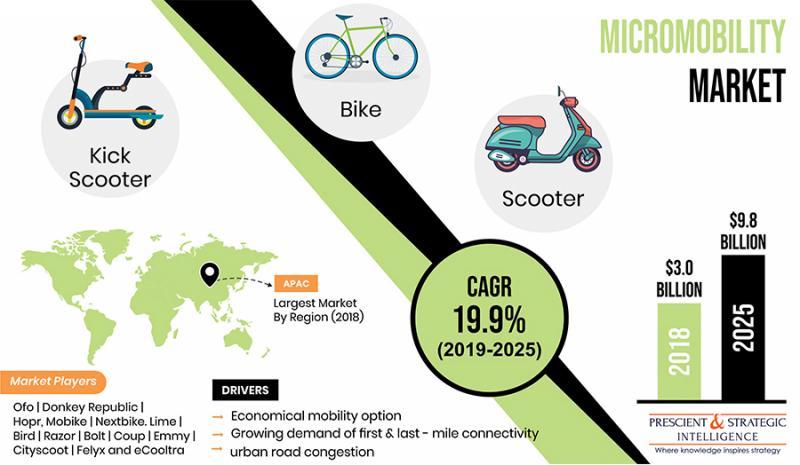 Micromobility solutions, such as bike sharing, scooter sharing, and kick scooter sharing services, enable commuters to cover a distance of fewer than 5 miles per trip. Such micromobility services intend to bridge the gap between first and last-mile connectivity, which cannot be achieved through ride hailing and carsharing services. Moreover, the provision of such services through dock-less or station-less model enables commuters to drop off bikes, kick scooters, and scooters at any place as per their convenience. In recent years, micromobility solutions have become very popular among the millennials and Gen Z, owing to their easy availability and cost-effectiveness. Additionally, the surging penetration of smartphones, reducing battery costs, increasing use of mobile payments, and rising developments in global positioning system (GPS) technology will fuel the micromobility market at a CAGR of 19.9% during 2019–2025. The market was valued at $3.0 billion in 2018 and it is projected to reach around $9.8 billion revenue by 2025.Request to Get the Sample Pages: https://www.psmarketresearch.com/market-analysis/micromobility-market/report-sampleThe burgeoning shift of the urban population toward micromobility solutions can be credited to the rapid introduction of new services, owing to the influx of hefty investments in the development of advanced micromobility solutions. Such investments are being made in established companies as well as start-ups offering kick scooter sharing, scooter sharing, and bike sharing services. For instance, in 2018, Balderton Capital, a London-based venture capital firm, invested $50 million in VOI Technology AB, a Swedish kick scooter sharing company. In recent years, micromobility service providing companies, such as Skip, eCooltra, Felyx, Bolt, Cityscoot, Jump, Emmy, Spin, WeMo, Bird, Coup, Lime, Ofo, Nextbike, Donkey Republic, Mobike, Citi Bike, and Hopr, have been engaging in partnerships and introduction of new services to reach out to more users. For instance, in July 2019, Bird announced its plan to establish its largest European hub in Paris. This hub aims to employ over 1,000 people. Moreover, in October 2019, Uber partnered with Cityscoot to integrate the scooter sharing service of the latter with its booking platform application. According to P&S Intelligence, the North American micromobility market demonstrated notable growth in the recent past, due to the extensive adoption of kick scooter sharing services in the region. Moreover, the region has emerged as the largest user of kick scooter sharing services, owing to the presence of prominent companies such as Bird and Lime in the continent. Additionally, the region is also witnessing a steady use of other micromobility services, such as scooter sharing and bike sharing. Whereas, Asia-Pacific (APAC) emerged as the largest consumer of bike sharing services, due to the presence of service providers such as Hello-Bike, Mobike, and ofo in the region. Besides, the lower cost of these services, in comparison to other solutions, also boosted the adoption of bike sharing services in the region. Furthermore, Europe has been the dominant user of scooter sharing services across the world. Paris and Madrid are the major hubs for scooter sharing activities. European countries such as Spain, France, and Germany are the prominent user of scooter sharing services.Make Enquiry Before Buying the Report: https://www.psmarketresearch.com/send-enquiry?enquiry-url=micromobility-marketThus, the burgeoning need for first and last-mile transportation and mounting investments being made in micromobility services providing companies will augment the adoption of micromobility solutions in the coming years.P&S Intelligence Contact: +1-347-960-6455 Email: enquiry@psmarketresearch.com Web: https://www.psmarketresearch.com Follow us on LinkedIn: https://www.linkedin.com/company/pnsintelligenceP&S Intelligence is a provider of market research and consulting services catering to the market information needs of burgeoning industries across the world. Providing the plinth of market intelligence, P&S as an enterprising research and consulting company, believes in providing thorough landscape analyses on the ever-changing market scenario, to empower companies to make informed decisions and base their business strategies with astuteness.

You can edit or delete your press release Why Is Urban Youth Opting For Micromobility Services? here

01-23-2023 | Logistics & Transport
P&S Intelligence
Australia E-Commerce in Automotive Aftermarket To Generate USD 3,822.2 Million b …
The Australia e-commerce in automotive aftermarket was worth around USD 1,503.5 million in 2022, and it will grow at a CAGR of 12.2% from 2022 to 2030, to touch USD 3,822.2 million by 2030, as per P&S Intelligence. This is due to the booming automotive aftermarket, escalating count of DIY customers, and convenience offered by online shopping platforms. Third-Party Retailers Account for Higher Product Sales The category of third-party retailers accounts for
01-23-2023 | Logistics & Transport
P&S Intelligence
North America Electric Scooters and Motorcycles Market Will Reach USD 2,348 Mill …
The North American electric scooters and motorcycles market was valued at USD 620 million in 2022, and this number is expected to reach USD 2,348 million by 2030, advancing at a CAGR of 18.10% during 2022-2030, according to P&S Intelligence. This development can be ascribed to supportive government initiatives, from both federal and state levels. To encourage the acceptance of electric vehicles, the government is offering tax rebates and subsidies
01-23-2023 | Health & Medicine
P&S Intelligence
Exploring the Growth of the Hybrid Electric Car Market
Before we move to the various advantages of hybrid electric cars, let's first understand their mechanism. A hybrid vehicle comprises both the internal combustion engine and electric motor. The batteries provide power to the motor, facilitating the rotation of the wheels either on their own or by supplementing the engine while accelerating. To receive free sample pages of this report@ https://www.psmarketresearch.com/market-analysis/hybrid-electric-car-market/report-sample Why Is It Hybrid before Electric? Since hybrid electric cars are a
01-20-2023 | Business, Economy, Finances, B …
P&S Intelligence
Autonomous Mobile Robots Market To Reach USD 10,979 Million by 2030
The total size of the autonomous mobile robots market was USD 3,148 million in 2022, and it will reach a value of USD 10,979 million by 2030, advancing at rate 16.90% in the years to come, as per a report by a market research company, P&S Intelligence. The logistics category had the largest share of revenue, of about 29% in the past. These robots are chiefly installed for transportation of goods

09-27-2022 | Advertising, Media Consulting, …
P&S Intelligence
Australia Micromobility Market Demand and Growth Insights Report
Factors such as the burgeoning demand for first- and last-mile connectivity and the surging need for reduced traffic congestion in urban areas are expected to drive the Australian micromobility market at a robust CAGR of 89.5% during the forecast period (2021-2030). The market growth will also be steered by the low cost and convenience offered by micromobility solutions. According to P&S Intelligence, the market was valued at $16.9 million in
09-14-2022 | Advertising, Media Consulting, …
P&S Intelligence
Benefits of Using Micromobility
Micromobility is the term used to describe a variety of small, lightweight vehicles that are operated by individual users and travel at speeds generally under 15 mph (25 km/h). Residents of densely populated places are especially drawn to micromobility devices because they provide quick and easy access to places like grocery stores, shops, or entertainment venues. Market Overview@ https://www.psmarketresearch.com/market-analysis/new-zealand-micromobility-market Moreover, the New Zealand micromobility market is predicted to touch a $2,395.1
01-28-2022 | Energy & Environment
ReportsnReports
Micromobility Charging Infrastructure Market 2022 | Detailed Report
According to Market Study Report, Micromobility Charging Infrastructure Market provides a comprehensive analysis of the Micromobility Charging Infrastructure Market segments, including their dynamics, size, growth, regulatory requirements, competitive landscape, and emerging opportunities of global industry. An exclusive data offered in this report is collected by research and industry experts team. Download FREE Sample Report @ https://www.reportsnreports.com/contacts/requestsample.aspx?name=4678050 The report provides a comprehensive analysis of company profiles listed below: - Ather Energy - bike-energy - Bikeep -
11-19-2021 | Energy & Environment
ReportsnReports
Micromobility Charging Infrastructure Market 2021 | Detailed Report
The research reports on “Micromobility Charging Infrastructure Market” report gives detailed overview of factors that affect global business scope. Micromobility Charging Infrastructure Market report shows the latest market insights with upcoming trends and breakdowns of products and services. This report provides statistics on the market situation, size, regions and growth factors. An exclusive data offered in this report is collected by research and industry experts team. Get Free Sample PDF (including
11-10-2021 | Business, Economy, Finances, B …
Big Market Research
Shared Micromobility Market Insights, Growth Forecast to 2025
The Global Shared Micromobility Market research by Market Study Report. It offers a feasibility analysis for investment and returns supported with data on development trend analysis across important regions of the world Global Shared Micromobility Research Report presents a competitive assessment and detailed statistical analysis on Global Shared Micromobility Industry prospects. The Shared Micromobility Report will enlighten the readers with market dynamics and market trends to provide a holistic market overview.
03-27-2020 | Advertising, Media Consulting, …
P&S Intelligence
Economic Viability of these Services Driving Micromobility Market
The global micromobility market generated $3.0 billion in 2018 and is expected to attain a value of $9.8 billion in 2025, registering a 19.9% CAGR during the forecast period (2019-2025). The market is growing because of the deployment of e-bikes and economic viability of this mobility option. Micromobility is among the various modes of transport with light duty vehicles, such as scooters, kick scooters, and bikes. These vehicles are utilized
Comments about openPR
Your portal is fast, simple, and easy to use. Others may have more functions but they also demand more editing time, you have to preformat the text in order to achieve a good result etc. I think openPR is really fantastic!
Andreas Knepper, wallmedien AG