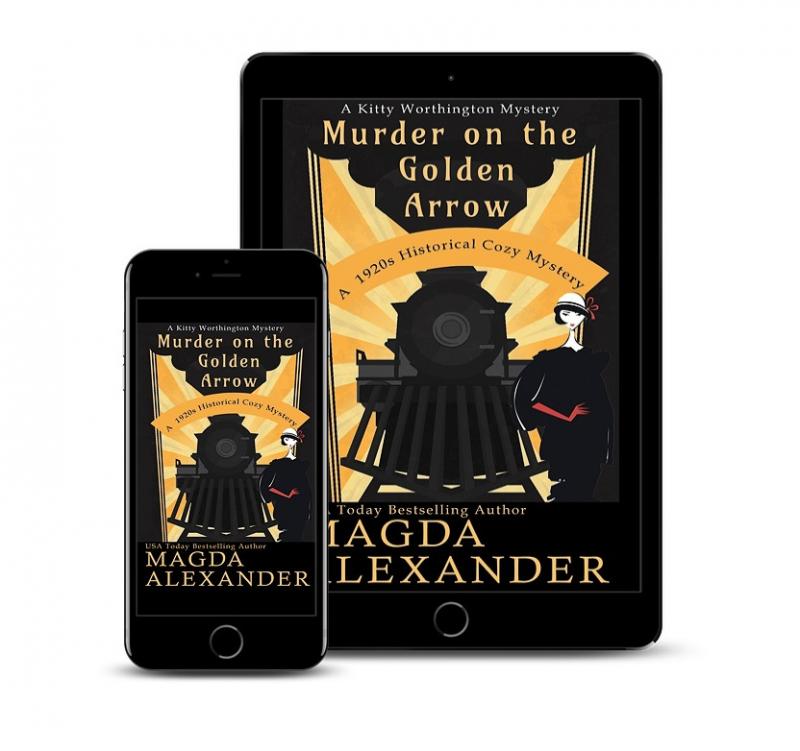 Murder on the Golden Arrow

Author Magda Alexander Releases New Historical Cozy Mystery - Murder on the Golden ArrowAuthor Magda Alexander is pleased to announce the upcoming release of her new book, Murder on the Golden Arrow. A frolicking historical cozy mystery filled with dodgy suspects, a dastardly villain, and an intrepid heroine sure to win your heart, Murder on the Golden Arrow is the first book in The Kitty Worthington Mysteries. For lovers of Agatha Christie and Downton Abbey alike.What’s a bright young woman to do when her brother becomes the main suspect in a murder? Why, solve the case of course.England. 1923. After a year away at finishing school where she learned etiquette, deportment, and the difference between a salad fork and a fish one, Kitty Worthington is eager to return home. But minutes after she and her brother Ned board the Golden Arrow, the unthinkable happens. A woman with a mysterious connection to her brother is poisoned, and the murderer can only be someone aboard the train.When Scotland Yard hones in on Ned as the main suspect, Kitty sets out to investigate. Not an easy thing to do while juggling the demands of her debut season and a mother intent on finding a suitable, aristocratic husband for her.With the aid of her maid, two noble beaus, and a flatulent Basset Hound named Sir Winston, Kitty treads a fearless path through the glamorous world of high society and London’s dark underbelly alike to find the murderer. For if she fails, the insufferable Inspector Crawford will most surely hang a noose around her brother’s neck.Murder on the Golden Arrow will be available for purchase in print and ebook formats upon its release.Book Information: Murder on the Golden Arrow The Kitty Worthington Mysteries, Book 1 By Magda Alexander Publisher: Hearts Afire Publishing Release Date: September 21, 2021 ISBN: 978-1943321117 ASIN: B096G5QGWR Page: 237 Genre: Historical Mystery, Cozy Historical MysteryAbout the Author: Magda Alexander is the USA Today bestselling author of several books, including the popular STORM DAMAGES series. She's equally at home writing historical mysteries and sexy contemporary romances. When she's not glued to her laptop writing her next book, Magda loves to bake delicious goodies and try out new recipes in her Instant Pot. A lifelong learner, Magda earned her degree from the University of Maryland and now resides in a city whose history dates back to colonial times.Contact: Website: https://www.magdaalexander.com/ Twitter: https://twitter.com/MagdaAlexander Facebook: https://www.facebook.com/MagdaAlexanderRomanceAuthor Instagram: https://www.instagram.com/magdaalexanderromance/ BookBuzz: https://bookbuzz.net/blog/historical-mystery-murder-on-the-golden-arrow-by-magda-alexander/Historical Mystery, Cozy Historical Mystery, BookBuzz, Murder on the Golden Arrow, The Kitty Worthington Mysteries, Magda Alexander, Hearts Afire PublishingBookBuzz.net 59 Heritage Way Drive Rome, GA 30165Website: http://bookbuzz.net/historical-mystery-murder-on-the-golden-arrow-by-magda-alexander/BookBuzz.net helps indie authors, hybrid authors, and small publishers promote and market their books. They also help with book reviews, publicity, and more. Promote your upcoming release, your new release, your back list titles, your kindle countdown deal, and much more. They offer NetGalley listings, book reviews, BookFunnel promos, and free book giveaways. Let's Create Some Buzz For Your Book!!!

05-31-2017 | Business, Economy, Finances, B …
Consulting agency "UkrAgroConsult" .
Peas - a golden niche?
A recovery trend is noticed in the Black Sea production of pulses. Their plantings expanded both in Russia and Ukraine against the 2015 minimum. Remarkably, Ukraine’s pea sown acreage hit a 20-year high in 2017, suggesting new harvest records to be set in the country. While pea consumption in the domestic market remains limited – the main factor pushing up this crop’s production is external demand. Black Sea peas are in
11-08-2011 | Associations & Organizations
Golden Chick
Golden Chick Franchise Hatches Global Expansion
Since Golden Chick first opened in 1967; the brand hasn’t strayed far from the nest. Before now, growth was purposely limited to Texas and Oklahoma. But this year, the Chick is flying the coop and slated for expansion in both the Middle East and Asia. The first Golden Chick to open overseas is in Amman, Jordan. The latest location, which opened its doors on September 5, is owned by Hasan Zoubi
05-17-2011 | Fashion, Lifestyle, Trends
MyReviewsNow
Spray Tanning Product Produces Golden Glow
MyReviewsNow announces "Spray-Tanning Success", a new product that can provide a glowing tan without exposure to the sun’s dangerous UV rays. The new method is called airbrush or spray tanning. The spray-on product provides a tan that is very natural looking, much like a natural tan. The advantage, according to the website’s owner is that “Spray tanning has no UV rays at all. The sun or a tanning bed exposes
01-03-2011 | Tourism, Cars, Traffic
GoldenTriangleTours.co
Golden Triangle Tour- India’s Tourism Backbone
India’s incredible tourism is defined by the majestic Golden Triangle Tour, which is actually accredited as an unforgettable gift, and unparallel magnificent view for the eyes of visitors. http://www.goldentriangletours.co/ The North Indian Golden Triangle Tour introduces the tourist’s to India’s pride in the form of majestic Indian royalty, rich heritage and diverse colorful culture. The Golden Triangle Tour’s circuit includes journey to Delhi – Indian pride, Agra – House to
10-28-2010 | Sports
Native Eyewear
Golden Community Bike Park Grand Opening
Community mountain bike parks are a relatively new concept that bring the excitement of off-road cycling to city-dwellers of all ages and skills. This weekend we’ll bring the riding to the people with the grand opening of Colorado’s first even volunteer and community built urban mountain bike park – built on underused park land with the power of volunteers, the city and the community. The day kicks off
10-25-2010 | Tourism, Cars, Traffic
Golden Triangle Tours
Golden Triangle Tours
Delhi, September 22, 2010 – Golden Triangle Tour is the best way to explore India, especially for tourists who are visiting the country for the first time. A golden triangle tour starts from the capital city, Delhi, traverse to Agra and to Jaipur and then finally back to Delhi completing the circuit. There are many packages regarding this and it takes minimum three days and can stretch to a
Comments about openPR
9 o'clock: discuss press release with client, 10 o'clock: submit release to openPR, within the briefest possible time release is published and displayed in a prominent place on openPR.de. I am thrilled!
Zehra Spindler, Calypso Now! - Communication Agency