Track records, victories for favourites and more spectators than ever before 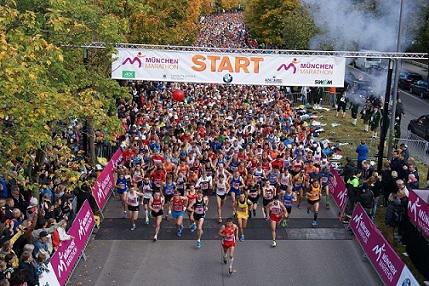 On Sunday, more than 18,000 active runners took advantage of the perfect running weather at the 27th MUNICH MARATHON. About 100,000 spectators ensured a fantastic atmosphere along the track. Below a Bavarian white-blue sky with mild temperatures around 15°C, Bavaria’s capital appeared at its best. In comparison to last year, the attendance figures of the MUNICH MARATHON increased by 13%. The marathon alone accounted an increase of 19%.This year, the MUNICH MARATHON was also venue of the German Marathon Championships 2012.7,542 participants registered for Munich’s run over 42,195 kilometres through the city. Fastest man of the day was Jan Simon Hamann with 2:19:42 hours, at his first marathon. He was followed by Sven Weyer (2:21:57 hours) and Benedikt Hoffmann (2:22:22 hours). Among the women, top favorite and Olympic participant Susanne Hahn won with a new track record. The athlete ran the marathon in 2:32:11 hours, followed by Monika Heiß (2:45:11 hours) and Steffi Volke (2:47:20 hours).The organisers had determined a limitation of participants for the half marathon; therefore, this discipline had been booked out for months. There were 5,311 starting places – the lucky ones who got a starting number ensured a great atmosphere on the day of the run. For the third time in a row, Sören Kah won the half marathon with a track record (this year’s record: 1:04:42 hours). Marco Bscheidl was second (1:11:25 hours) and Michael Pfeil (1:11:29 hours) came in third. Among the women over 21,0975 kilometres, the local top runner Ingalena Heuck won with 1:21:35 hours. The winner’s rostrum was completed by Laura Conley (USA, 1:25:50 hours) and Jessica Lewerenz (1:29:56 hours).3,270 athletes participated in the popular 10-kilometres-run. Among the men, Tobias Gröbl won (30:53 minutes), before Heiko Middelhoff (31:14 minutes) and Marius Stang (32:14 minutes). The fastest women on this track were Veronica Clio Pohl (34:48 minutes), Tina Fischl (35:46 minutes) and Julia Lettl (36:14 minutes).With registering for the MUNICH MARATHON, the runners also booked a sightrunning-tour, as the track leads them along the most important sights, such as the English Garden, City Hall, Pinakotheken, Residence, Odeonssquare and Siegestor. After the race, the medical supervisor, Dr. Roger Hofmann, reported about 92 medical cases on the track and 116 in the finishing area – 12 people had to be transported, but none of whom had serious medical conditions. Unfortunately, defending champion Steffi Volke fell and suffered an injury – but at the beginning of winter, she will be fit again.At the press conference after the finish, the room was full of mutual enthusiasm from athletes and functionaries!Marathon winner and German Marathon Champion 2012 Susanne Hahn: Finishing in the Olympic Stadium was the best. There were a lot of spectators and the atmosphere was great! I’m really happy with the victory and the track record.Marathon winner and German Marathon Champion 2012 Jan Simon Hamann: At first, I was just in the middle of the field with more experienced runners who made the pace. At kilometre 20, I started to push harder. The last four to five kilometres were extremely hard, but I did it!Marathon-second Monika Heiß: These were my tenth German Championships. It’s a nice jubilee, as I won a medal for the first time. I also want to thank Steffi Heiß for running the marathon; that’s how we won the Team Championships.Marathon-third Benedikt Hoffmann: At the beginning, I was saving my strength reserves; at kilometre 25, I pushed more. At kilometre 40, I didn’t really believe to achieve a place at the rostrum, but I gave everything.Halfmarathon winner Sören Kah: My goal was to win for the third time in a row. And I’m super happy!Halfmarathon winner Ingalena Heuck: A great event, it was fun! Especially, since I’m from Munich.Harald Rösch (DLV): Many thanks to the organisers! It was a great day, absolutely worthy of German Championships. I can’t wish for more.Edith Rubenbauer (City of Munich): You could tell from the atmosphere how much enthusiasm Munich’s citizens have for running. We have a great track, and did a good job today.Gernot Weigl (runabout MÜNCHEN MARATHON GmbH): We can be satisfied! The mix of different athletes here in this press conference is exactly what the MUNICH MARATHON is about. We introduced the local-hero-concept, and I think it paid off. We were lucky with the weather – for the 13th time in a row, everybody reached the Olympic Stadium with dry feet.Publication free of charge. Specimen copy requested.About the MUNICH MARATHON Since 2000, the MUNICH MARATHON has been organised by runabout MÜNCHEN MARATHON GmbH (former medien marathon münchen GmbH). The traditional running event takes place every year, always one week after the Oktoberfest, and is one of Germany’s Top 5 marathon events. In Southern Germany, the MUNICH MARATHON is the number one. Up to 20.000 runners participate every year. The track leads along the most important sights of the Bavarian capital, and ends with the finish at the Munich Olympic Stadium. The program around the run consists of a marathon exhibition (two days) in the Event-Arena at the Olympiapark with about 45,000 visitors, a pasta party and an international Trachtenlauf (traditional costume run) one day before the marathon.Press service: Team Werbelabel Presseteam München Gottstein-März und Partner Roermonder Straße 279 D-41068 MönchengladbachTel: +49 (0) 2161 / 304 - 1183 Fax: +49 (0) 2161 / 304 – 1540 Mail: muenchen@werbelabel.de URL: www.werbelabel.de

You can edit or delete your press release Track records, victories for favourites and more spectators than ever before here

08-26-2013 | Sports
Munich Marathon
Sightrunning in Munich: Cultural Tour at the MUNICH MARATHON
To discover a metropolis in an active way with running shoes instead of sitting in crowded travel busses is no insider’s tip anymore. If the route not only leads along important sights, but also offers the opportunity to enjoy the view together with many like-minded people, unforgettable moments are guaranteed. On October 13th 2013, the MUNICH MARATHON promises sightrunning on a high cultural level. The course through Bavaria’s capital displays the
01-24-2013 | Sports
Munich Marathon
MUNICH MARATHON 2013: Start of Registration for the Biggest Running Event in Sou …
Even though there are still more than nine months remaining until the 28th MUNICH MARATHON on October 13th, 2013, many runners are already excited for the start of registration for the German running event. Just one hour after the opening of online registration, the first 500 participants were already recorded. The interest in the Bavarian marathon has never been greater. What is new in 2013? In comparison to last year, there are