Growth of the Automotive Adhesives and Sealants Market in Germany 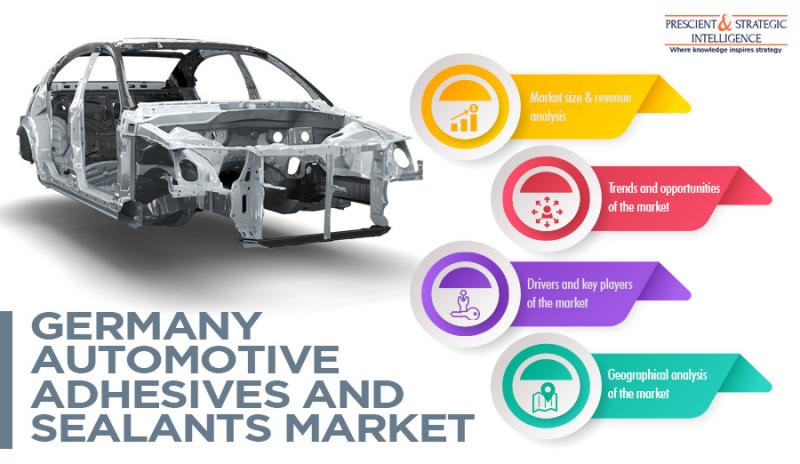 The mushrooming usage of adhesives and sealants in the German automotive industry is the major factor responsible for their booming sales in the country. These adhesives and sealants are being increasingly used in the manufacturing of several automotive parts and components in the country, primarily because of their higher resistance to moisture and strong bonding capability. In addition, they also offer higher flexibility, good impact resistance, and durability than the conventionally used adhesives and sealants.Download sample copy of this report: https://www.psmarketresearch.com/market-analysis/germany-automotive-adhesives-and-sealants-market/report-sampleMoreover, epoxy adhesives and sealants are being extensively used in the manufacturing of headlights and signal lights and also in the bonding of automobile bumpers. As Germany is one of the largest exporters and manufacturers of automobiles, the sales of adhesives and sealants are shooting up in the country. Besides, the surging deployment of electric vehicles, on account of the implementation of various vehicle electrification policies by the government and the increasing environmental concerns, is also creating lucrative growth opportunities for adhesive and sealant producers in the country. For instance, the German government provided various tax and financial incentives to automobile manufacturers to reduce the price of electric vehicles, which helped it achieve its objective of electrifying 1 million cars in the country by 2020. This subsequently caused the expansion of the German automotive adhesives and sealants market. Furthermore, with the soaring sales of commercial vehicles and passenger cars in the country, the revenue of the market will rise from $891.8 million in 2017 to $1,156.8 million by 2023.Browse full report at: https://www.psmarketresearch.com/market-analysis/germany-automotive-adhesives-and-sealants-marketAdditionally, the market is expected to advance at a CAGR of 4.5% from 2018 to 2023. Epoxy, polyurethanes, polyvinylchloride, hot melts, silicones, rubber, and acrylics are the most widely used types of adhesives and sealants in the country. Out of these, the demand for the epoxy variants was found to be the highest in 2017. This was because of the huge requirement for these adhesives and sealants, on account of their rigid bonding capabilities, which enables greater structural integrity of the automobile. Under-the-hood (UTH) and power train, assembly, paint shop, and body in white (BIW) are the major application areas of automotive adhesives and sealants. Amongst these, the requirement for these bonding materials was the highest in assembly applications in the past years, as per the observations of P&S Intelligence, a market research company based in India. These materials were extensively used for assembling automotive parts and components during the past few years. Hence, it can be said without any hesitation that the use of adhesives and sealants in the German automotive industry will shoot up in the coming years, primarily because of their ability to reduce the weight of vehicles and impart higher durability and impact resistance to automobiles.Contact: P&S Intelligence Phone: +1-347-960-6455 Email: enquiry@psmarketresearch.com Web: https://www.psmarketresearch.comAbout P&S IntelligenceP&S Intelligence is a provider of market research and consulting services catering to the market information needs of burgeoning industries across the world. Providing the plinth of market intelligence, P&S as an enterprising research and consulting company, believes in providing thorough landscape analyses on the ever-changing market scenario, to empower companies to make informed decisions and base their business strategies with astuteness.

10-22-2021 | Advertising, Media Consulting, …
P&S Intelligence
U.S. Electric Bus Market Segments, Development, Growing Demand and Top Key Playe …
In the U.S., the transportation industry is responsible for around 14% of the total greenhouse gas (GHG) emissions, as per an article published by the Environmental Protection Agency (EPA) in 2019, which also said that the country was the second-largest GHG emitter in the world, after China. Thus, the focus on reducing the emissions and, ultimately, the rate of air quality degradation, is high here. This is why governments at
10-22-2021 | Advertising, Media Consulting, …
P&S Intelligence
How Are Wireless Charging Systems Impacting Electric Bus Charging Stations?
The U.S. government is incorporating a large number of electric buses in its transportation system, on account of increasing environmental concerns. For example, transit operators in Los Angeles and Seattle are committed toward replacing their conventional diesel buses with electric buses. These buses are used for public transport, transit services, and military application. Most of the decisions regarding the purchase of electric buses are taken by the federal or state
10-22-2021 | Energy & Environment
P&S Intelligence
3D Printing Construction Market By Construction Method, Material Type, End Use a …
Factors such as the surging environmental concerns regarding the waste generated by the construction sector, mounting investments being made in renewable energy infrastructure, and rising focus on reducing the accident rate and health and safety risks will drive the 3D printing construction market growth during the forecast period (2021–2030). According to P&S Intelligence, the market revenue reached ~$15 million in 2020. Additionally, the presence of numerous possibilities for architectural flexibility
10-22-2021 | Advertising, Media Consulting, …
P&S Intelligence
Asia-Pacific Osseointegration Implants Market Set for Rapid Expansion in Future
The growing prevalence of spinal cord injuries (SCIs), increasing number of dental implant surgeries, and surging cases of trauma are expected to drive the osseointegration implants market at a CAGR of 4.0% during the forecast period (2018–2023). The market revenue stood at $9.9 billion in 2017 and it is projected to reach $12.5 billion by 2023. Moreover, the soaring cases of hearing loss in the geriatric population and rising investments