Press release from: The Embassy of Uzbekistan in Berlin

/ PR Agency: Pressservice of the Embassy of Usbekistan 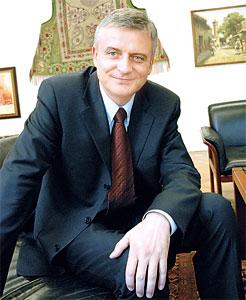 Mr. Ruediger Bohn, Deputy ambassador of the Federal Republic of Germany in Uzbekistan

As is known, on June 30 Germany’s EU presidency came to an end. The EU, under the leadership of Federal Minister of Foreign Affairs Frank-Walter Steinmeier, has developed a new strategy of cooperation between the EU and Central Asia. A UT correspondent has interviewed the deputy ambassador of the Federal Republic of Germany Ruediger Bohn. - What do you think are the perspectives of Uzbek-German cooperation? - Let me draw your attention to the fact that in the past few months crucial guidelines for the future of not only German-Uzbek but also European-Uzbek relations have been developed. Germany has been holding the EU Presidency for the past six months. During this period, I believe, Germany has succeeded in increasing the European interest in Central Asia. Within the EU, we initiated the development of a Central Asia strategy. This document which has a critical importance for the further cooperation between the EU and Central Asia was officially presented on the last day of our presidency, on June 30, in Berlin. This strategy may become the basis for fostering European-Central Asian relations, ranging from intensifying the political dialog to extending the cooperation in the energy sector, strengthening cultural ties and cooperation regarding border security. Closer relations between Europe and Central Asia will naturally have an impact on the intensity of the development of Uzbek-German relations. These relations have been developing for fifteen years at a high level in spheres such as politics, economy, culture and mutually beneficial joint projects. In this regard, I would like to draw your attention to the activities of the German political foundations operating in Uzbekistan, to the cooperation aimed at contributing to the development of the capital and provinces of the Republic as well as to the activities of cultural organizations such as the Goethe Institute and the DAAD (German Academic Exchange Service). The German side has channeled 250 million euro into these ends over the last 15 years. Quite recently, we have constructed a new building for the Goethe Institute and the DAAD in Tashkent which gives our cooperation in the sphere of culture and education more visibility. The same holds true for the field of development cooperation where the main four German organizations work now together under one roof in the “German House of Development Cooperation”. - Active contacts in which other spheres may further strengthen bilateral cooperation? - During the last 12 months our economic and political dialog at a high level has been continued both in Berlin and Tashkent. Among these visits I would like to single out the visit by Germany’s foreign minister Frank-Walter Steinmeier to Tashkent and Bukhara, which took place in November last year. Also, state and public figures of Uzbekistan have had an opportunity to visit Germany within the framework of a guest program of the federal government of Germany and participate in the conferences on “State and religion”, “Energy and water issues”, “Legal reforms”. For the political dialogue between Germany and Uzbekistan we have, I think, created a solid basis for discussions even for topics on which we have different opinions. All this confirms that German-Uzbek relations are currently developing very intensively. One sector where we could increase cooperation is, I believe, tourism. Its development will be a chance for the Uzbek and German people to get to know each other better. - What additional mechanisms to perk up bilateral cultural and humanitarian cooperation may, in your opinion, be effective? - Relations in the sphere of science and education, too, are developing along with the expanding scale of bilateral trade and economic cooperation. Cooperation in this area between our two states is currently at a very high level. Uzbek people show a high interest in studying German and this will contribute to a more active cultural and educational exchange. One of the elements of the said European strategy for Central Asia is a creation of a European initiative in education to which Germany will contribute. As for German-Uzbek humanitarian cooperation, I would like to draw your attention to joint programs that are very beneficial for the healthcare sector in Uzbekistan, addressing mainly the fight against tuberculosis, the support of birth control and protection of children’s health. In this connection, during German-Uzbek governmental negotiations in April this year, the parties reached agreement to further develop cooperation in the sphere of healthcare. Source: www.ut.uz The Embassy of Uzbekistan Perleberger Str. 62 10559 Berlin Phone: 030 39 40 98 13 Fax: 030 39 40 98 62 e-mail:botschaft@uzbekistan.de www.uzbekistan.de

More Releases from The Embassy of Uzbekistan in Berlin