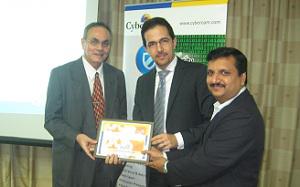 Comguard, a Dubai based leading value added distributor for IT security products in the Middle East and North Africa region and part of the Spectrum group recently conducted a Cyberoam Partner Day to honour its partners for their contribution towards the success of award winning IT security products and solutions from Cyberoam in the Middle East region.

Comguard is the authorised distributor for Cyberoam in the Middle East region and has been leading the charge of expanding the market penetration for Cyberoam with the help of its wide channel base spread across the region.

Mohammad Mobasseri, Senior Vice President, Comguard, Surender Kumar Bishnoi, General Manager-Middle East, Cyberoam and several other Senior Executives from both Comguard and Cyberoam were present at the Partner Day to facilitate and award key channel partners from the region to reward their efforts to grow businesses and allowing deeper penetration for Cyberoam in the region.

The event was well attended by channel partners hailing from various countries from the Middle East region including UAE, Bahrain, Kuwait, Saudi Arabia, Oman, Qatar, among others.

On the occasion of the Partner Day, Mohammad Mobasseri, Senior Vice President, Comguard said, “Cyberoam Partner Day is an extremely special day for us as it provides us an opportunity to extend our gratitude to our best channel partners by rewarding them for the efforts.Such recognition of our partners helps us to motivatethem further to drive their efforts more aggressively to expand the reach of Cyberoam in the region.”

Echoing the similar sentiment, Surender Kumar Bishnoi, General Manager-Middle East, Cyberoam said, “Cyberoam Partner Day is a great platform to reward our channel partners for their contribution to the growth of Cyberoam in the region and as well as understanding the challenges that they face while growing the market for us.”

About Comguard:
Comguard FZ LLC is one of the leading Value added Distributors in the IT security space and has a reach across the Middle East and North Africa region. The company was established in 2002 and is headquartered in Dubai, UAE. Comguard is a part of Spectrum Group which is engaged in IT networking and security training, and consultancy. Hence, the biggest strength for Comguard is the skill sets which has made it one of the fastest growing Value added Distributors in the region and has been recognized by several awards from vendors and industry platforms like Top 5 Value added Distributor by Reseller Middle East magazine and the Choice of Channel Award from VAR MEA magazine. For more information see www.comguard.net.

12-21-2020 | IT, New Media & Software
Vistar Communications
Spectrami wins the Top Distributor for Network Security of the Year Award
Spectrami, the region’s primary cyber security value-added distributor today announced that it has won the coveted ‘Top Distributor for Network Security of the Year’ award at the GEC Awards 2020, organised by the leading technology media company in the Middle East, GEC Media group. The 7th edition of GEC Awards this year were one of the first live in-person awards that were conducted since the outbreak of coronavirus in the region.
02-06-2019 | IT, New Media & Software
Vistar Communications
AOC launches brand new series of Surveillance Monitors
AOC, the display specialist today announced the expansion of product portfolio with the introduction of its brand new E1 series of surveillance monitors targeting the fast growing regional market for video surveillance. According to the analysts 6Wresearch, the Middle East commercial security market will grow by nearly 17 percent annually over the next six years, valuing US$7.4 billion in 2024, compared to an estimated US$2.9 billion in 2018. Video surveillance
10-25-2018 | IT, New Media & Software
Vistar Communications
ESET launches new security solutions to protect constantly-connected users
The latest version of ESET NOD32 Antivirus, ESET Internet Security and ESET Smart Security Premium that offers fortified multilayered protection, enhanced IoT protection, product referral and a new security report feature is released today. Users can rely on the best balance of speed, detection and usability acknowledged by multiple testing bodies to protect their constantly-connected devices. It is predicted that by 2025, there will be over 75 billion connected devices
10-17-2018 | IT, New Media & Software
Vistar Communications
GreyEnergy group targeting critical infrastructure, possibly in preparation for …
ESET has uncovered details of a successor to the BlackEnergy APT group. Named GreyEnergy by ESET, this threat actor focuses on espionage and reconnaissance, quite possibly in preparation for future cybersabotage attacks. BlackEnergy has been terrorizing Ukraine for years and rose to prominence in December 2015 when they caused a blackout that left 230 thousand people without electricity in the first-ever blackout caused by a cyberattack. Around the time of