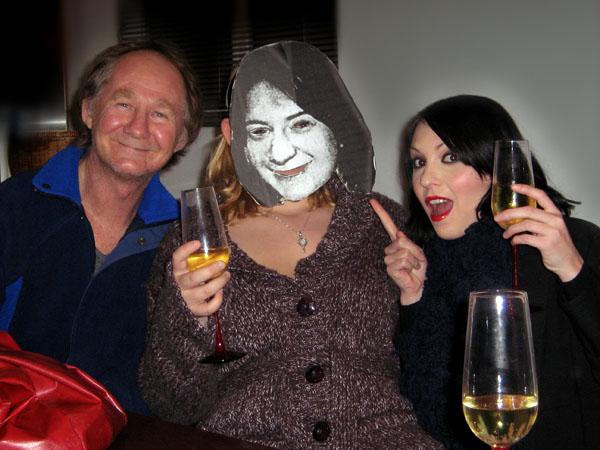 Rock musician Lisa Maxwell’s video clip for her single Anna has topped the viewer-voted Most Wanted chart on USA-based entertainment network eaTV. This is the Lisa’s seventh week in the Most Wanted Top 10, following the selection of her Anna video as eaTV’s Spotlight Pick Video in May, when it was played every hour for a week. Anna has been voted number one ahead of clips from the likes of Bloc Party, The Chemical Brothers and Maximo Park.More than 100,000 unique households worldwide tune in to eaTV more than 350,000 times a month for more than 30,000 viewing hours.The video, shot and directed by Lisa and starring singer/songwriter Jasmine Billingsley as the mysterious masked Anna, was filmed entirely in Lisa’s hometown Benalla, Victoria, with a number of the town’s perplexed locals making cameo appearances. Since it first appeared on the internet earlier this year, Anna has proven a hit with fans and critics worldwide on Lisa’s official website and social networking sites MySpace and YouTube.While the true identity of the coffee-guzzling, croissant-munching, free-hugging character Anna remains a mystery, Lisa has revealed that a frightening degree of truth lies behind the inspiration for the antics captured in the video, which include the display of a cheeky “Will Drop Pants 4 Plane Ticket” sign.Fans can view and vote for Lisa Maxwell’s Anna video at www.evolvingartist.com.Lisa Maxwell’s debut album Select Vacancy featuring the single Anna is available now on Apple iTunes worldwide and through all good music retailers. See: www.lisamaxwell.netEssential Music Australia - Australian independent music label eaTV - USA based entertainment networkEssential Music Australia Benalla, Victoria, Australia www.lisamaxwell.net info@lisamaxwell.net

10-31-2006 | Leisure, Entertainment, Miscel …
Essential Music Australia
Aussie Rocker Lisa Maxwell Goes Global
Remember the name Lisa Maxwell: the Australian indie rock singer/songwriter/musician (not to be confused with the British actress or Australian vocalist who released a string of records in the 90s of the same name) is reaching a global audience, with sales of her music recorded in Australia, Europe, the UK and USA. That audience looks as though it is set to grow rapidly in the not-too-distant future, with the recent announcement