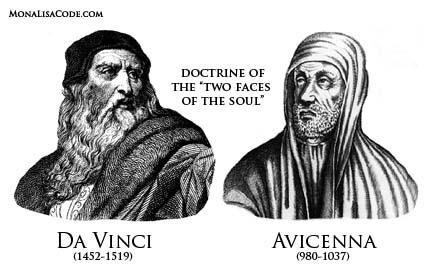 Scott Lund, an investigative writer and documentary producer, has found Leonardo da Vinci's inspiration for the Mona Lisa in a book by medieval Islamic scholar Avicenna. According to Lund, Leonardo painted his masterpiece based on the writings of Avicenna, who stated that the "soul gives birth to soul as body to body."In his upcoming book and film, the “Mona Lisa Code,” Lund shows that Leonardo gave life to Avicenna's tenet by painting the Mona Lisa. “Leonardo's iconic portrait is his profound vision of a divine soul being shared between a mother and her unborn male child,” he says.“Avicenna's treatise on the soul, 'De Anima', was a popular must read for scholars during the Italian Renaissance. Leonardo apparently borrowed the Latin word Anima from the title of Avicenna's book in order to conceive the anagram ANIMA SOL as a secret code for the name Mona Lisa. It is also from Avicenna's book that Leonardo likely got the idea for painting the 'two faces of the soul',” says Lund.The hidden metaphor of the Mona Lisa is identified by Lund as the Roman god Janus, who was commonly represented with two faces looking in opposite directions. By using Janus as a clever theme to portray the duality of the soul, Leonardo was able to incorporate the doctrine of the "two faces of the soul" from Avicenna's book into the Mona Lisa.Anima means "soul" in Latin, and the Latin name Sol refers to the Sun-god otherwise known as Janus. Leonardo wrote that the vital force of the soul descended from the sun, which justified his use of the pagan god Janus to depict the Mona Lisa's dual soul, according to Lund.“The secret name 'Anima Sol' is an ingenious construction by Leonardo to succinctly express his symbolism in the Mona Lisa,” says Lund. “It expresses Avicenna's belief in the duality of the soul, and it expresses Leonardo's belief in the role of the sun in making all souls possible.”Scott Lund has announced that on Saturday, September 10th, 2011, he will reveal additional findings about the Mona Lisa to the public and international news media in Rome. “It will change everything previously assumed about Leonardo's masterpiece, and nothing will ever be the same again,” says Lund.Scott Lund is an investigative writer who is producing a documentary about new discoveries concerning the Mona Lisa.POB 3021 Laguna Hills, CA 92654

09-19-2011 | Arts & Culture
Mona Lisa Code
DA VINCI'S ULTIMATE JEST
Mona Lisa Illusion is Seen Through the 'Eyes' of Two-Faced Janus, Says Mystery Solver Scott Lund Los Angeles, CA - Sept. 16, 2011 The greatest secret in art history was declared by Scott Lund in Rome on the date 9/10/11. It was revealed to be an ingenious optical trick that Leonardo da Vinci used to transform the viewer of the Mona Lisa into the pagan Sun god Janus who looks in opposite
09-05-2011 | Arts & Culture
Mona Lisa Code
Sept. 10 Presentation in Rome to Finally Solve Mona Lisa Mystery
The most conclusive evidence of a secret code hidden in the Mona Lisa will be revealed on September 10 at 3 p.m. in the public square near the Colosseum and the Arch of Constantine in Rome. At that time Los Angeles mystery solver Scott Lund will lead a large gathering of people and international news media from the square to the actual place where Leonardo da Vinci envisioned history's most