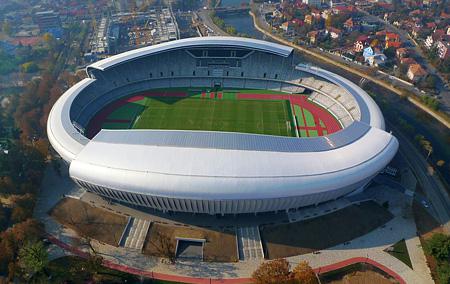 As the world's largest architectural awards programme, the WAN AWARDS offers worldwide exposure for architectural projects. This year, Cluj Arena Stadium was nominated for the WAN Awards 2012, in the Civic Buildings category, by the International Awards for Architecture. More info you can find here: http://shar.es/uae9m With a budget of over 35 mil Euros, Cluj Arena Stadium in Cluj-Napoca, Romania, managed to meet the highest norms in performance and functionality, totaling latest UEFA and FIFA standards.The stadium built in the heart of Transylvania, was designed to be multipurpose, accommodating numerous social events including football and other sports competitions.Some brief details: -30 328 seats (approximately 1500 seats for the VIP section and 30 seats for people with disabilities); - 8 lane accredited athletics track; - 80 meters practice track for young athletes; - 2 electronic scoreboards (60 square meters each); - Underground parking for over 300 cars; - Nocturnal lights for HD transmissions; - Video surveillance system, with over 100 surveillance cameras throughout the entire stadium.worldarchitecturenews.com: "Transparency is the major architectural theme. It is visual, mental and affective. The skin is designed to breathe, literally, allowing to stay connected with the park, the river, the hills and the city. You may see through the facades inside out while daylight and outside in while the lights are on during a show." (the entire article can be read here:http://shar.es/uaAPW)Dico şi Ţigănaş Design Office was in charge of modeling and detailing this complex project, which was finished in the autumn of 2011."It is more than a stadium; it is the new landmark of the city, in which we managed to capture the passion, the emotions and most of all, the spirit of fair-play", Eng. Florin Dico from Dico şi Ţigănaş Designe Office.For more details, you can visit the official web-site of Cluj Arena Stadium: http://www.clujarena.ro/About GRAITEC Founded in 1986, GRAITEC is a major software developer for civil engineering offering a Building Information Modeling (BIM) system that automates the entire structural process. Used by more than 30,000 professionals worldwide, GRAITEC solutions have helped in creating outstanding projects: Cœur Défense tower, Stade de France stadium, Cairo Subway, Düsseldorf International Airport, Băneasa Shopping City in Bucharest, Milano Fair, etc. The GRAITEC Group has more than 260 employees working in 14 companies (France, Germany, Spain, Czech Republic, Italy, Romania, Russia, United Kingdom, Canada and USA). GRAITEC also manages an international network of more than 40 Value Added Resellers. For more information, please visit www.graitec.comValérie Dugard Group Communications Manager GRAITEC SA 12 Burospace 91572 Bièvres Cedex phone: +33 (0)1 69 85 67 10 Email valerie.dugard@graitec.com

You can edit or delete your press release Cluj Arena Stadium, designed with ADVANCE Steel, nominated for the WAN Awards 2012 here

10-18-2018 | IT, New Media & Software
Fleio
Fleio billing 1.1 adds OpenStack Rocky support and domain name registration
Cluj-Napoca, ROMANIA, Oct. 18, 2018 – Fleio today announced its OpenStack® customer management, billing and control panel software for public cloud and web hosting companies, Fleio billing version 1.1. Fleio software automates the entire process for cloud users. New customers can use Fleio to sign up for an account, pay invoices, add credit to their account, pay online, as well as create and manage cloud resources such as virtual machines, storage
03-14-2016 | Health & Medicine
TryHealthier
TryHealthier - The Art of Living Website Launch
TryHealthier.com is a website devoted to providing well researched articles and tips on how an individual can keep their body, mind and spirit healthy in a way that is easy for anyone to understand. TryHealthier.com will stand out from the competition due to the fact that this service actually focus on helping the readers with high quality articles and also trough the "ask the doctor" feature that can be found easily
07-02-2014 | Business, Economy, Finances, B …
Fraunhofer IAO
Network office opens in Cluj-Napoca
Promoting industry 4.0 in Transylvania with the Global Digital Production innovation network Fraunhofer IAO and the Technical University of Cluj-Napoca (TUC-N) have been working together in the Global Digital Production innovation network in Romania for around a year. This German-Romanian collaboration is an avenue for Fraunhofer IAO to support both industrial development and industry-oriented research in Transylvania. The network office in the Romanian city of Cluj-Napoca opened on July 1, 2014. Many
06-22-2011 | IT, New Media & Software
Barandi Solutions
ConvertWebsite.com, the solution that makes any website truly usable on mobile d …
June 21, 2011 ConvertWebsite.com is now available Barandi Solutions proudly announces the launch of ConvertWebsite.com, the solution that makes any website truly usable on mobile devices. Such mobile versions are compatible with iPad and Android tablets, as well as iPhone and other smart-phones. By using ConvertWebsite.com, blogs can be accessed anywhere without requiring a desktop computer, thus increasing their traffic with up to 20%. To push even forward, they can be read even without
03-18-2010 | IT, New Media & Software
CoSoSys
License to Hope campaign powered by CoSoSys and the Romanian Foundation for Chil …
Romanian software vendor and domestic foundation supporting children’s welfare aim to establish modern computer lab and offer proper training Key points • The License to Hope goal is provide a 50 high end laptop lab for underprivileged and marginalized children. • Courses and training accompanying the computers will yearly offer about 150 children a proper education and a chance to self improve. • 50% of each purchased Secure it Easy license will be donated
10-24-2009 | Business, Economy, Finances, B …
Intertrust Consulting Srl.
Intertrust Consulting sees upcoming chances in Romania due to crisis shaken envi …
Cluj-Napoca, October 13, 2009. Romania has had an extraordinary growth in the first half of this decade with the effect of overheating especially real estate markets and prices for management capacities and services. It can be seen now that in a matter of months the present crisis has had the positive effect of bringing prices and corporate culture in line with European standards. Nevertheless the crisis in Romania will be
Comments about openPR
9 o'clock: discuss press release with client, 10 o'clock: submit release to openPR, within the briefest possible time release is published and displayed in a prominent place on openPR.de. I am thrilled!
Zehra Spindler, Calypso Now! - Communication Agency