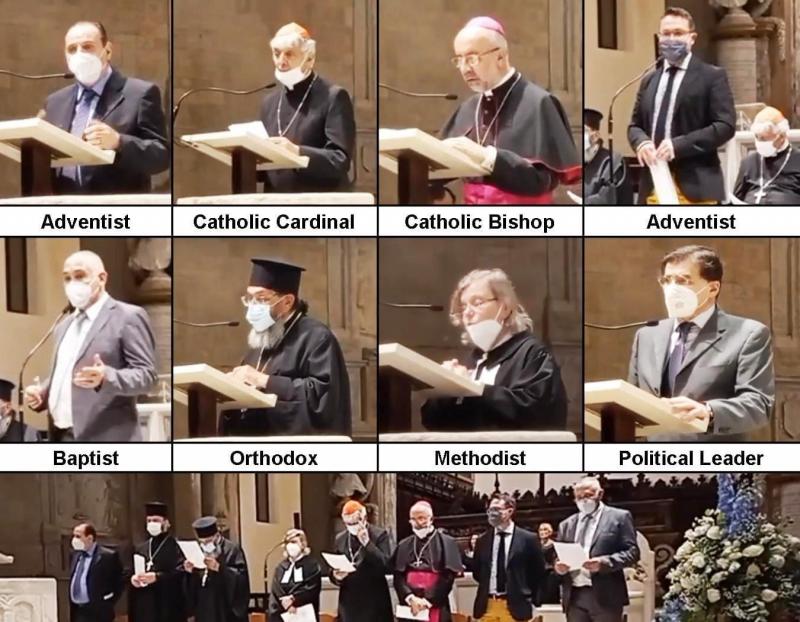 One of the greatest indications that we have come to the end of God’s mercy is when we see churches, including Seventh-day Adventists, being bewitched by Rome and blindly “wondering” after the beast with great admiration. Our own people are working to forget the past. They are no longer concerned with biblical doctrine. They have embraced the error that separation with Rome is a scandal and that unity is more important than truth. What an amazing fulfillment of the prophecy: “And his deadly wound was healed, and the whole world wondered after the beast” (Revelation 13:3).On Saturday, June 12, 2021, Seventh-day Adventist leaders joined Catholics, Anglicans, Methodists, Baptists, and Orthodox at the Roman Catholic Cathedral of San Ciriaco in Ancona, Italy to celebrate the 20th anniversary of the Ecumenical Charter and to promote Eucharistic unity. This is the same Ecumenical Charter that calls for the creation of “One Holy Apostolic Catholic Church.” This is the same Ecumenical Charter that the General Conference and the Inter-European Division apparently said last year that the Seventh-day Adventist Church was not following. Well, apparently, church leaders are not only praising the accomplishments of the Ecumenical Charter, but are now saying that they are working on creating the Eucharistic unity necessary to solidify their relationship with their “brothers and sisters in Christ.” All of this is documented in a video posted by the Roman Catholic Archdiocese of Ancona-Osimo. You can watch the video and set the subtitles in any language through the automatic language setting on YouTube.“And his deadly wound was healed: and all the world wondered after the beast … He that leadeth into captivity shall go into captivity.” (Revelation 13:3, 10).If we follow the beast, we will be led into captivity and we will go into Babylonian captivity. That’s what God says about following Rome. Each soul must make his or her decision. Either we will yield implicit and unreserved obedience to God, our Creator and Redeemer, or we will bow in obedience to God’s rival – the beast. Click to see the video, photos and to read the full story: http://adventmessenger.org/adventists-and-catholics-celebrate-the-ecumenical-charter-promote-eucharistic-unity-and-work-to-end-divisions/Contact: Andy Roman, Publisher Address: Advent Messenger, PO Box 96, Dover, OK 73734 Phone: (888) 299-2119 Website: www.adventmessenger.org Email: adventmessengers@gmail.comAbout: Advent Messenger provides news and commentary on current events, top stories, social trends and political and religious events. For more news visit www.adventmessenger.org

You can edit or delete your press release Adventists and Catholics Celebrate the Ecumenical Charter, Promote Eucharistic Unity and Work to End Divisions here

08-26-2020 | Leisure, Entertainment, Miscel …
Advent Messenger
900 Catholic Masses for President Donald Trump
With only three months to go until the November 3, 2020 presidential election, the Trump 2020 campaign is working hard to attract Catholic voters. The Trump campaign has a website to court the Catholic vote. It is called Catholics for Trump 2020 and it is motivating Roman Catholics to support the re-election of Donald Trump by appealing to the abortion issue. The website says: “Catholics for Trump will energize and activate
01-31-2019 | Arts & Culture
Dan Corner
Infant Baptism By Catholics Vs Scripture; Evangelical Outreach Ex Catholic Dan C …
Can Biblical truth be debated by man? And, if so, would the consensus reached be based on the Word of God? Infant baptism is one such issue that has been debated endlessly since the Middle Ages. There are two broad schools of thought. In an article on AboutCatholics.com entitled "A Simple Defense of Infant Baptism", the article states "Infant baptism is one of the traditions that was handed down, but not
01-31-2013 | Associations & Organizations
Greek Catholic Union (GCU)
Greek Catholic Union Donates $100,000 to SS. Cyril & Methodius Byzantine Catholi …
Beaver, PA - The 56th Annual Saint Nicholas Celebration to benefit Saints Cyril and Methodius Byzantine Catholic Seminary was held on Sunday, December 9, 2012 at Saint John Cathedral Center, 210 Greentree Road in Munhall, Pennsylvania. During the program, George Juba, GCU President and CEO, presented an educational grant of $100,000.00 to Archbishop William C. Skurla of the Archeparchy of Pittsburgh for the SS. Cyril & Methodius Byzantine Catholic Seminary. In
10-10-2012 | Associations & Organizations
Greek Catholic Union
GCU - Greek Catholic Union to Support Lee National Denim Day
Beaver, PA - To show support for breast cancer awareness month, the Greek Catholic Union (GCU) is participating in Lee National Denim Day, a fundraiser created by Lee Jeans in support of the American Cancer Society. This is the third year of participation by GCU on a national level with a registered team. Not only are office employees at the GCU National Headquarters collecting donations, four lodges and districts
09-28-2012 | Politics, Law & Society
BoD, Books on Demand, Norderstedt (Autor: me)
The Catholic Church and the divorced and remarried
A Bielefeld theologian opened an ecumenical view of the Orthodox Church and from there he opened prospects for a current controversial issue in the Catholic Church Almost 20 years after the pastoral letter of the bishops of the Oberrheinischen Kirchenprovinz "Zur seelsorglichen Begleitung von Menschen aus zerbrochenen Ehen, Geschiedenen und Wiederverheirateten Geschiedenen" since May 2012, this explosive topic is discussed in Germany not only from the "usual church critics", but rather
12-16-2009 | Associations & Organizations
Greek Catholic Union
Greek Catholic Union Opens Ski Weekends to Non-members
BEAVER, PA - In response to the recent cold and snowy weather, the Greek Catholic Union (GCU), announced this week the dates for their 3 ski weekends, with a change in the events’ structure to invite non-member groups from regional churches to be a part of the fun. “These weekends promote the social benefits of belonging to a fraternal organization and allow members an opportunity to introduce new friends and
Comments about openPR
Your portal is fast, simple, and easy to use. Others may have more functions but they also demand more editing time, you have to preformat the text in order to achieve a good result etc. I think openPR is really fantastic!
Andreas Knepper, wallmedien AG