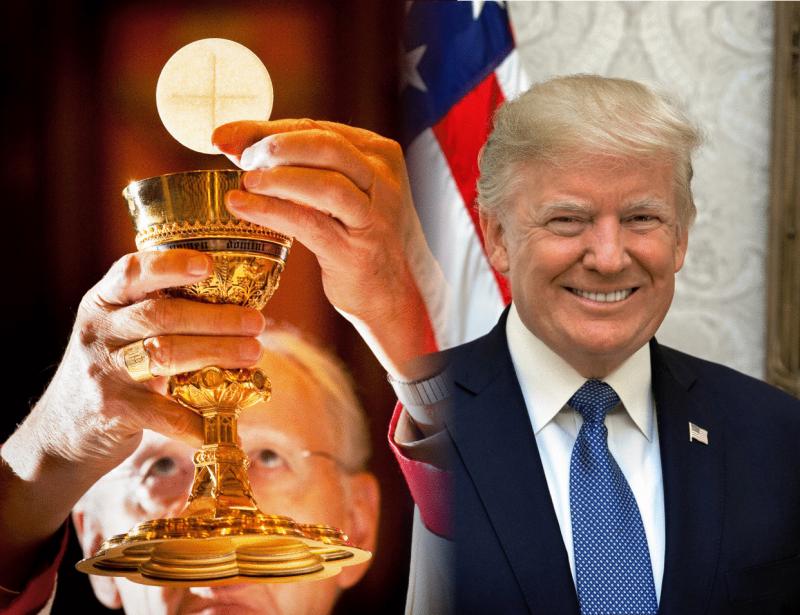 With only three months to go until the November 3, 2020 presidential election, the Trump 2020 campaign is working hard to attract Catholic voters. The Trump campaign has a website to court the Catholic vote. It is called Catholics for Trump 2020 and it is motivating Roman Catholics to support the re-election of Donald Trump by appealing to the abortion issue. The website says:“Catholics for Trump will energize and activate the Catholic community in re-electing President Donald J. Trump by sharing the many successes of the Trump administration. Re-electing President Trump will ensure continued victories in pro-life issues, judicial appointments, and religious freedom.” The Trump campaign also released a video called “Faith in America – Catholics for Trump.” The video includes members of Trump’s team and other Catholic activists. And even though President Trump disagrees with Pope Francis’ message on immigration, open borders, wealth redistribution and radical environmentalism (Laudato Si), he still has strong support from conservative and moderate Catholics.What’s most disturbing about this year’s presidential campaign is the call by many Catholics to implement special masses for Donald Trump in their Roman Catholic churches. The goal is to have 900 masses for President Donald Trump. So far it has been reported that 834 masses have been promised in different Catholic churches around the world. No true student of the Bible can deny the political and religious implications of these kinds of political masses. Who can deny that we are seeing Bible prophecy fulfilled when Catholic churches appeal to worship (mass) to elect a Protestant President? Chapter 13 of Revelation warns that these intimate relationships between worship and politics will precede the mark of the beast crisis.“When Protestantism shall stretch her hand across the gulf to grasp the hand of the Roman power, when she shall reach over the abyss to clasp hands with spiritualism, when, under the influence of this three-fold union, our country shall repudiate every principle of its Constitution as a Protestant and republican government and shall make provision for the propagation of papal falsehoods and delusions, then we may know that the time has come for the marvelous working of Satan and that the end is near” (Last Day Events, p. 131).900 Catholic masses in the name of a Protestant President are indeed strange events unfolding before our eyes. It seems that the religious stage is being set. Almost all the churches have united. The Roman Catholic Church apparently has had the most to gain by the atmosphere of ecumenism. The entire world is being pressured to join the great apostate fellowship found in Revelation 13, 17 and 18. These important prophetic chapters described the final union of the world into one body to oppose God. These events take place just before the second coming of Jesus.For decades, faithful Seventh-day Adventists have been announcing the final developments of world events. God’s word describes clearly this crisis hour which is upon us. Can we remain indifferent as we witness the accurate fulfillment of prophecy? Are we ready for the storm to break? Shall we fear and tremble or prepare ourselves for this trying hour that is coming upon the whole earth?“Four mighty angels hold back the powers of this earth till the servants of God are sealed in their foreheads. The nations of the world are eager for conflict, but they are held in check by the angels. When this restraining power is removed there will come a time of trouble and anguish. Deadly instruments of warfare will be invented. Vessels with their living cargo will be entombed in the great deep. All who have not the spirit of truth will unite under the leadership of satanic agencies, but they are to be kept under control till the time shall come for the great battle of Armageddon” (Bible Commentary, Vol. 7, p. 967).These powers are held in check until God’s restraint is removed. Friends, the United States is on the verge of becoming what prophecy describes – the same anti-christian system of government as the First Beast of Revelation 13. America was founded upon the two great principles of Protestantism—liberty, and Republicanism—a representative government of elected officials. But have you noticed the direction in which this nation is headed? The anti-God, anti-religion and anti-freedom form of government which has slowly been introduced is the political strategy of absolute control and power over its people through the use of force, fear and terror. Our powerful nation is fast coming under the control of a small group of bureaucrats who will control the entire nation.“The agencies of evil are combining their forces and consolidating. They are strengthening for the last great crisis. Great changes are soon to take place in our world, and the final movements will be rapid ones” (Testimonies, Vol. 9, p. 11).The antidote for this unholy alliance of the dragon, the First Beast and the Second Beast of Revelation 13 is the everlasting gospel found in Revelation 14. These great messages have to take priority in the work of the church. These messages which the Lord gave must be taken seriously. Only through the effortless and vigorous work of evangelism can there be hope and salvation to overcome in these days ahead.Click for the full story: http://adventmessenger.org/900-catholic-masses-for-president-donald-trump/Contact: Andy Roman, Publisher Address: Advent Messenger, PO Box 96, Dover, OK 73734 Phone: (888) 299-2119 Website: www.adventmessenger.org Email: info@adventmessenger.orgAbout: Advent Messenger provides news and commentary on current events, top stories, social trends and political and religious events. For more news visit www.adventmessenger.org

01-31-2019 | Arts & Culture
Dan Corner
Infant Baptism By Catholics Vs Scripture; Evangelical Outreach Ex Catholic Dan C …
Can Biblical truth be debated by man? And, if so, would the consensus reached be based on the Word of God? Infant baptism is one such issue that has been debated endlessly since the Middle Ages. There are two broad schools of thought. In an article on AboutCatholics.com entitled "A Simple Defense of Infant Baptism", the article states "Infant baptism is one of the traditions that was handed down, but not
01-31-2013 | Associations & Organizations
Greek Catholic Union (GCU)
Greek Catholic Union Donates $100,000 to SS. Cyril & Methodius Byzantine Catholi …
Beaver, PA - The 56th Annual Saint Nicholas Celebration to benefit Saints Cyril and Methodius Byzantine Catholic Seminary was held on Sunday, December 9, 2012 at Saint John Cathedral Center, 210 Greentree Road in Munhall, Pennsylvania. During the program, George Juba, GCU President and CEO, presented an educational grant of $100,000.00 to Archbishop William C. Skurla of the Archeparchy of Pittsburgh for the SS. Cyril & Methodius Byzantine Catholic Seminary. In
10-10-2012 | Associations & Organizations
Greek Catholic Union
GCU - Greek Catholic Union to Support Lee National Denim Day
Beaver, PA - To show support for breast cancer awareness month, the Greek Catholic Union (GCU) is participating in Lee National Denim Day, a fundraiser created by Lee Jeans in support of the American Cancer Society. This is the third year of participation by GCU on a national level with a registered team. Not only are office employees at the GCU National Headquarters collecting donations, four lodges and districts
09-28-2012 | Politics, Law & Society
BoD, Books on Demand, Norderstedt (Autor: me)
The Catholic Church and the divorced and remarried
A Bielefeld theologian opened an ecumenical view of the Orthodox Church and from there he opened prospects for a current controversial issue in the Catholic Church Almost 20 years after the pastoral letter of the bishops of the Oberrheinischen Kirchenprovinz "Zur seelsorglichen Begleitung von Menschen aus zerbrochenen Ehen, Geschiedenen und Wiederverheirateten Geschiedenen" since May 2012, this explosive topic is discussed in Germany not only from the "usual church critics", but rather
12-16-2009 | Associations & Organizations
Greek Catholic Union
Greek Catholic Union Opens Ski Weekends to Non-members
BEAVER, PA - In response to the recent cold and snowy weather, the Greek Catholic Union (GCU), announced this week the dates for their 3 ski weekends, with a change in the events’ structure to invite non-member groups from regional churches to be a part of the fun. “These weekends promote the social benefits of belonging to a fraternal organization and allow members an opportunity to introduce new friends and
03-19-2008 | Leisure, Entertainment, Miscel …
Batiste Music
Bridging A Gap - Music in the Catholic Church
Atlanta, GA.-As Lionel and Lyndon Batiste took their places as alter boys, they knew there was a special place etched in time that only they would be able to fulfill. However, the two young brothers never realized their lives would take on such an enormous calling. God’s plan for them slowly and methodically began to unfold. It all started at “The Shrine of the Immaculate Conception” in Atlanta, GA.
Comments about openPR
OpenPR is clearly structured and remains true to its principle of confining itself to the essential parts. OpenPR has proven to be a very good and reliable partner to our media agency: Within the shortest time the releases are online and go down well with the media representatives. The success of OpenPR is reflected in the steadily increasing number of press releases. It is good that OpenPR exists!
Ursula Koslik, Director Marketing & PR, F+W Hamburg