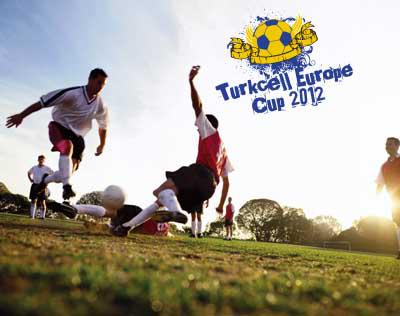 Leading mobile company launches nationwide football tournament in Germany to promote intercultural dialogue, respect and fair play among youth. Cologne based mobile company Turkcell Europe has become the main sponsor of a new football tournament to be launched on August 25th, in cooperation with the German Olympic Sport Federation (DOSB) and the Burda Sports Group. The “Turkcell Europe Cup” will be the first nationwide project sponsored by a private company as part of the "Integration through Sports" Program. Turkcell Europe aims to enhance fair play and respect, as well as intercultural dialogue through this social sponsorship project, says Ekrem Özorbeyi, General Manager of the company. Leading mobile company Turkcell Europe has stepped up its contribution to social commitment projects in Germany, and become the main sponsor of the nationwide football tournament series, Turkcell Europe Cup. Starting on 25th of August, the tournament will bring together dozens of youth and amateur football teams of diverse social and cultural backgrounds. The qualification games will take place in the cities of Hamburg, Cologne, Frankfurt/M., Mainz and Stuttgart. The final tournament in Berlin will be on the 13th of October, where leading teams will be awarded prizes. Ekrem Özorbeyi, General Manager of Turkcell Europe said: "In providing mobile services as a regional player , we experience diverse cultures and perhaps we witness more than most that working in a multicultural environment enriches our understanding, enhancing our capabilities and becoming a key factor in our success. After the first year of our launch in a new market, Germany, I am now convinced that diversity is our wealth and also the key to success. And in fact the German national football team provides one of the best examples of this, with prominent players from different social and cultural backgrounds uniting with one common goal, exceptional performance. We would like to support this spirit. We are, therefore, very happy to launch the Turkcell Europe Cup, by supporting the efforts of the German Olympic Sport Federation (DOSB) with the cooperation of Burda Sports Group. This project will highlight cultural diversity as richness. We hope that it will also enhance fair play and respect, as well as promote intercultural dialogue and solidarity in our society.”For more information about the Turkcell Europe Cup please check our page at www.turkcell.de (currently available in German and Turkish) or http://www.integration-durch-sport.de/de/integration-durch-sport/aktuell/detail/news/turkcell_europe_cup_startet/ .About Turkcell EuropeTurkcell Europe commenced its commercial activities in Germany in March of 2011, headquartered in Cologne. The company provides mobile services with various price and quality advantages, particularly in communications between Germany and Turkey. Its main customer groups are Turks living in Germany and Germans who have close relations with Turkey. Turkcell Europe was founded as a 100 percent Turkcell subsidiary. Turkcell is the leading communications and technology company in Turkey, with 34.7 million subscribers and a market share of approximately 53% based on June 30, 2012 results. Turkcell is also a leading regional player, with market leadership in five of the nine countries in which it operates with its approximately 65.8 million subscribers as of June 30, 2012. It was one of the first among global operators to have implemented HSPA+. It has achieved speed of up to 43.2 Mbps using Dual Carrier technology, and is continuously working to provide the latest technology to its customers, e.g. 84 Mbps in the near future. Turkcell reported a TRY2.6 billion (US$1.4 billion) net revenue with total assets of TRY17.4 billion (US$9.6 billion) as of June 30, 2012. It has been listed on the NYSE and the ISE since July 2000, and is the only NYSE-listed company in Turkey.Contact: Derya Zeyrek Corporate Communications Turkcell Europe GmbH KÖLNTURM Im Mediapark 8 50670 Köln/Germany www.turkcell.deoffice: +49 (221) 454 65 83 mobile: +49 (151) 470 210 76 e-mail: derya.zeyrek@turkcelleurope.de