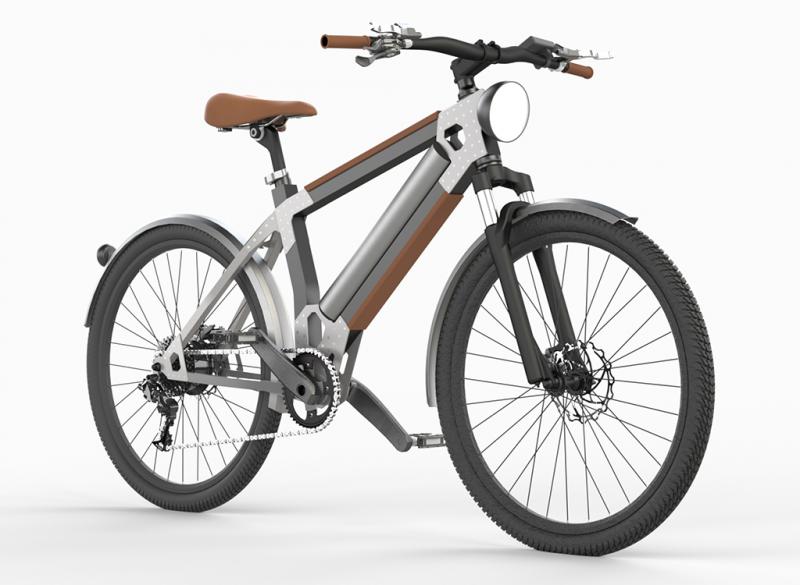 Today, along with the growing popularity of environmentally friendly and easy-to-use electric vehicles, there is a growing interest among consumers in the multi-purpose Commuter e-Bikes class. This type of bicycle can be used both on city streets and on country trips, and over fairly long distances. As a result, the design of such e-bikes must have sufficient strength without increasing weight, provide ride comfort and be equipped with a large-capacity battery.Along with the 6061-aluminum alloy, which has already become classic for bicycle frames manufacture, there are much stronger aviation alloys 2024 and 7075, which are used in the manufacture of aircraft fuselages and wings. These alloys have the best Fatigue Strength figures, which allows aircraft components to withstand significant dynamic and vibration loads. But these alloys have one characteristic – it is difficult to bend and weld them. The affordable Avial Commuter e-Bike frame, developed by the Avial Bikes start-up team, is made from these aviation alloys and the Hybrid glue-rivet technology is used to connect the components, just like in the aviation industry.Hybrid glue-rivet technology is a sustainable technology that protects both the environment and workers. Compared to welding, there are no high requirements for the preparation of the surfaces of the workpiece, there is no light radiation, vapors and sparks, no thermal stresses arise at the junction point, there is no need to re-heat the frame after welding to restore the strength properties of the aluminum alloy to the T6 state, and workers in production do not need any special skills. At the same time, the joint obtained with the help of Hybrid glue-rivet technology is not less strong than the welded one, and during long-term operation, it is always possible to visually control its quality.The latest version of the affordable Avial Commuter e-Bike frame weighs up to 3 kg and is designed for cyclists up to 120 kg (260 lbs.). An important difference of the patent-pending frame developed by the Avial Bikes team is that when using modern aircraft alloys 6061 and 7075, and the Hybrid glue-rivet technology, the spatial structure of the frame is not only light and strong, but also quite elastic, commensurate with analogs made of steel. As a result, such a frame effectively dampens small vibrations that occur when driving on dirt roads and provides greater ride comfort.AviAl Bikes Vallila 12, Helsinki, Finland, 00140 https://avialbikes.com Baruch Dorfman info@avialbikes.comWhen developing the Avial Bikes frame, we decided to go back from welding and use the technology of aircraft fuselages manufacturing. As a result, the patent-pending frame of our e-bike is assembled with profiles made of aircraft-grade aluminium alloys that are joined with rivets. This production is not environmentally destructive and also provides entirely diversified frames manufacturing of different sizes, in fact, considering the specific body organization for each customer.

03-22-2021 | Business, Economy, Finances, B …
Coherent Market Insights
Hybrid seeds Potential Future 2021
Hybrid seeds are majorly used in commercial farming to increase crop yields and to develop disease and climate resistant plants. These seeds are developed by natural methods of cross breeding and they are not genetically modified. Hybrid seeds are majorly used in gardening and farming of flowers and vegetables such as roses, tomatoes, and sweet corn. The Hybrid Seeds Market research report covers the present scenario and the growth prospects of
09-22-2020 | Logistics & Transport
MarketsandMarkets
Hybrid Train Market: Analysis & Developments
According to the new market research report "Hybrid Train Market by Propulsion Type (Electro Diesel, Battery Operated, Hydrogen, CNG, LNG, and Solar), Application (Passenger and Freight), Operating Speed (>100 km/h, 100-200 km/h, Mr. Aashish Mehra MarketsandMarkets™ INC. 630 Dundee Road Suite 430 Northbrook, IL 60062 USA : 1-888-600-6441 Email: sales@marketsandmarkets.com Research Insight: https://www.marketsandmarkets.com/ResearchInsight/hybrid-train-market.asp Visit Our Web Site: https://www.marketsandmarkets.com MarketsandMarkets™ provides quantified B2B research on 30,000 high growth niche opportunities/threats which will impact 70% to 80% of worldwide companies’ revenues.
10-30-2018 | Business, Economy, Finances, B …
Research Report Insights
Hybrid Vehicles Market 2026 | Gasoline Hybrid, Diesel Hybrid, Parallel Hybrid, S …
Research Report Insights in its report titled “Hybrid Vehicles Market: Global Industry Analysis and Opportunity Assessment, 2016–2026” offers detailed insights and in-depth research on the global hybrid vehicles market over a 10-year forecast period 2016 – 2026. The report covers the important factors driving the growth of the global hybrid vehicles market, untapped opportunities for manufacturers, trends and developments shaping the dynamics of the global hybrid vehicles market and other
10-01-2018 | Arts & Culture
gisela graf communications
Hybrid Tbilisi
Reflections on Architecture in Georgia The Caucasian metropolis of Tbilisi is in a permanent state of transformation. Spectacular new buildings contrast with late-Soviet formal experiments such as the Ministry of Highway Construction, an icon of Soviet brutalism. Meanwhile, palaces, administration buildings, and museums by European architects from the early-twentieth century are fading into oblivion, while entire streets around them are being reconstructed. Georgia’s capital appears like something of a paradox: on
09-21-2017 | IT, New Media & Software
kbvresearch
Global Hybrid Devices Market Trend
The Global Hybrid Devices Market attained a market size of $5742.1 million in 2015 and it is expected to reach $29,820.2 million by 2022, growing at a CAGR of 26.4% during 2016 -2022. The North America market dominated the Global Hybrid Devices Market in 2015, and would continue to be a dominant market till 2022; growing at a CAGR of 24.8% during the forecast period. However, Asia-Pacific market is expected
08-07-2017 | Sports
Interloper, INC
Hybrid Golf clubs for seniors
New hybrid golfing golf equipment for seniors with graphite shafts that helps seniors generate extra club head velocity and a better trajectory translating into greater distance. Dallas, tx – august 1, 2017. Interlopergolf announced their all new select 5000 hybrid golfing golf equipment for seniors with senior flex graphite shafts to be had in length 1 to nine, pitching wedge and sand wedge. They may be bought for my part or
Comments about openPR
Your portal is fast, simple, and easy to use. Others may have more functions but they also demand more editing time, you have to preformat the text in order to achieve a good result etc. I think openPR is really fantastic!
Andreas Knepper, wallmedien AG