Kögel's share of the market continues to grow in Germany 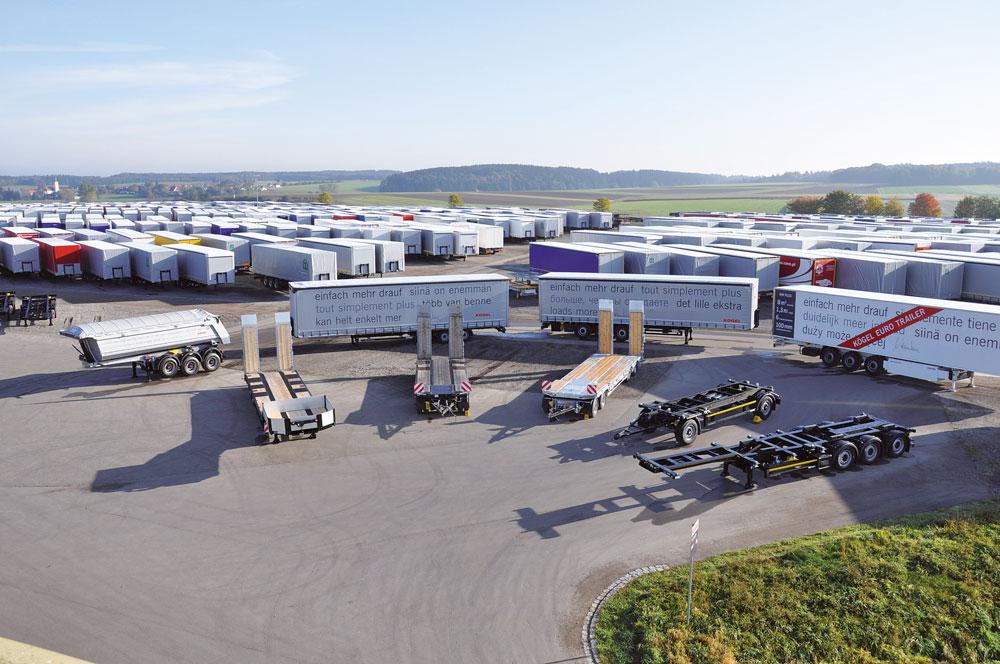 Burtenbach, 26th July 2012 • Kögel has sold more than 6,800 vehicles in the first 6 months of 2012 • Thomas Heckel: "In contrast to our competitors, we have once again been able to increase our share of the market in Germany considerably" • Exports accounted for 69 percent of sales The IAA commercial vehicle year of 2012 has so far been very good for Kögel: Europe's third largest trailer manufacturer has demonstrated an increase in production in the past six months when compared to the previous year of 1.213 to 6,888 units. German trailer market The current registration figures for the first six month in 2012 issued by the Federal Authority for Powered Vehicles show that: Even though the trailer market in Germany has shrunk by 6.9 percent, Kögel has been able to buck this general trend by increasing its share of the market by 2 percent. In the field of curtain-sider trucks Kögel recorded a market share of over 18 percent. Export strength Around 17 percent of the 40,149 trailers produced by German trailer manufacturers were supplied by Kögel, according to the VDA. That is 4 percent more than the comparable time period in 2011, and also bearing in mind the reduction in production of all German manufacturers. 69 percent of the Kögel trailers were destined for the export market. In the first two quarters Kögel has been able to continue to increase its market share, even though the general trend was in the opposite direction. Because all Kögel innovations help forwarding companies to save costs and to increase transport efficiency. Under the motto "Added value for the forwarding companies and the construction industry" will, of course, also be the IAA Highlights, that Kögel will be presenting in September in Hanover in Hall 27 on Stand F18. "In contrast to our major competitors, we have once again been able to increase our share of the market in Germany considerably. This is not only as a result of our high quality vehicles, but also primarily because of the long-term added value that they represent“, explains Thomas Heckel, CEO and Managing Director at Kögel, the reasons for the continuing success of his company. Kögel, a brand with over 75 years of tradition which earned a leading position all over Europe, is once again in focus with new energy and its distinctive experience and competence. Kögel has reinvented itself – by returning to the strengths that originally made the company great: Passion for transport. Quality characterised by engineering expertise. Innovation which deserves the name because it provides relevant benefit to customers. In addition to products for the forwarding industry, there are now models for the construction industry, which is not entirely a new sphere of activity for Kögel. www. koegel.com Kögel Trailer GmbH & Co. KG Industriestr. 1 89349 Burtenbach Volker Seitz Head of communication Telephone + 49 (82) 85 88 – 12 3 06 Telefax + 49 (82) 85 88 – 12 4 24 volker.seitz@koegel.com www.koegel.com

09-11-2012 | Logistics & Transport
Kögel Trailer GmbH & Co. KG
The forwarding company MEINDL takes delivery of the seventeenth height-optimised …
Burtenbach, 9th. August 2012. • Kögel Mega P55: Maximum volume and compliance with the four metre regulation The Austrian MEINDL Transport Ges.m.b.H. extends its fleet with six new height-optimised Kögel Mega. In total, MEINDL now has 17 Kögel Mega P55 trailers in its fleet. The new volume miracle from the German trailer manufacturer is ideally suited to volume transport with its internal effective height of three metres at an overall height of just
09-11-2012 | Logistics & Transport
Kögel Trailer GmbH & Co. KG
Kögel sandwich panel competence centre is now the Kögel PurFerro GmbH & Co. KG
Burtenbach, 19th July 2012 • Ralf Hirschfeld is the CEO of Kögel PurFerro GmbH & Co. KG. The sandwich panel competence centre in Duingen, Lower Saxony, has been a part of the Kögel group of companies since the end of 2011 and, from now on, will be called Kögel PurFerro GmbH & Co. KG. The renaming of the company is accompanied by the appointment of three managing directors to form the management
07-17-2012 | Logistics & Transport
Kögel Trailer GmbH & Co. KG
Kögel offers benefits for companies in the forwarding and construction sectors
Burtenbach, 11th July 2012 • Brand-new Kögel innovations help forwarding companies to save costs and to increase transport efficiency Innovations from the Swabian trailer manufacturer Kögel have characterised modern goods transport by road for decades. The fact that the ideas, concepts and innovations from Kögel turn up at other trailer manufacturers after many years confirms their leadership in innovation. In combination with our in-house know-how, we can meet the requirements of the
07-06-2012 | Logistics & Transport
Kögel Trailer GmbH & Co. KG
The 300th Kögel trailer for the Jenty group
Burtenbach, 5th. July 2012 - Kögel Mega TIR: bonded volume transport - Jenty receives five new Mega trailers The Belarus-Austrian joint venture Jenty now has a total of 300 Kögel semi-trailers in its fleet after receiving five new Kögel Mega TIR trailers for the Westintertrans forwarding company. These Mega curtain-sider trucks without platform gate are ideally suited not only for domestic transportation but also for deployment in trans-border transportation. For Jenty, a