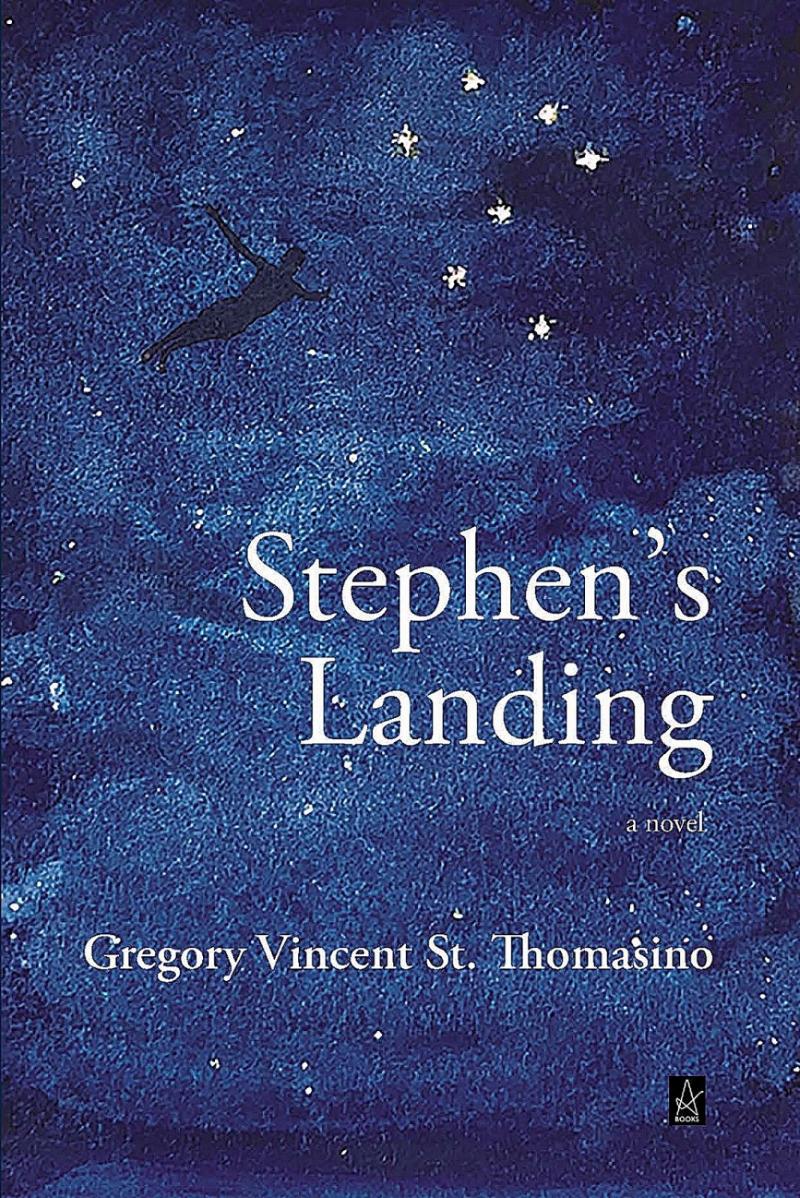 ADELAIDE BOOKS is proud to offer the latest work by Gregory Vincent St. Thomasino: Stephen's Landing hitting stores everywhere now. Stephen Child is in his mid-twenties. His mother died giving birth to him, his father died accidentally when he was a little boy, and he was raised in the family of his Aunt Gloria. He has recently returned to college after taking some time off and after studying at music school. His psychotherapist, Dr. Panic-of-Loss, counsels him and is treating his nervous anxiety disorder. This disorder (a “generalized nervous anxiety”) is at the source of a recurring disillusionment and an inability to act with any sense of permanence or cohesion. In a society that seems to him to be psychologically rudderless, Stephen is in search of the psychological true north. Stephen is in love with Lydia. So deep in Stephen’s consciousness is Lydia that she has become a reference point for all that he experiences. She has, as it were, taken on the proportions of a constellation in his personal night sky—she has, as it were, become a part of his personal mythology. When he thinks he has lost Lydia and begins an affair with the middle-aged ex-model-turned-mystic Dorothea Russell, Stephen is soon given over to a series of emotional somersaults—first with Ms. Russell, then with Ms. Russell’s teenage daughter, Dawn, and then with Ms. Russell’s assistant, Skye Bosch. Stephen is soon to discover his own personal true north, as the stars in his constellation are about to fall into place.Gregory Vincent St. Thomasino lives in New York City.Available on Amazon244 Fifth Ave., D27, New York, NY 10001 USAADELAIDE BOOKS LLC is a New York based independent company dedicated to publishing literary fiction and creative nonfiction. It was founded in July 2017 as an imprint of the Adelaide Literary Magazine, with the aim to facilitate publishing of novels, memoirs, and collections of short stories, poems, and essays by contributing authors of our magazine and other qualified writers.

03-24-2020 | Arts & Culture
BookBuzz.net
Author Stephen Perkins Releases New Supernatural Suspense - Grand Masquerade
Author Stephen Perkins Releases New Supernatural Suspense - Grand Masquerade Author Stephen Perkins is pleased to announce the release of his new supernatural suspense novel, Grand Masquerade. Released by Star Born Publishing in February 2020, the book is already receiving rave reviews from readers and reviewers. Beware the terror lurking beneath a mask of smiles... On an ancient ley line, deep within Vermont's dark forests, lives a mysterious and frightening secret... A forbidden
06-22-2016 | Politics, Law & Society
Achorage Lawyer
PRESS RELEASE FOR STEPHEN MERRILL, ATTORNEY
TRIAL ATTORNEY Anchorage Attorney Stephen Merrill in his five years of practice in Alaska has proven to be one of the better trial lawyers in the State. 1. A criminal court acquittal on one felony charge and two misdemeanor charges. ANCHORAGE SUPERIOR COURT 2. Business Law Trial with a 4k pretrial offer and a 22k verdict for the client plaintiff. ANCHORAGE DISTRICT COURT 3. Business Law Trial with a 14k pretrial offer and
04-01-2011 | IT, New Media & Software
Managing Editor Inc.
MEI Appoints Stephen Arbour as Vice President of Technical Services
Jenkintown, PA (March 31, 2011) — Managing Editor Inc. (MEI), an Adobe premier development partner and a leading provider of software solutions for the publishing industry, today announced the appointment of Stephen Arbour as Vice President of Technical Services. The promotion represents a strategic consolidation of resources at MEI. In his new role, Arbour — formerly the company’s Senior Director of Software Operations — will oversee MEI’s Integration Services, Information Technology,
03-02-2011 | Fashion, Lifestyle, Trends
Bellagala
Stephen Geffre Joins Bellagala Staff of Minneapolis Wedding Photographers
ST. PAUL, MINN. March 2, 2011 – Bellagala is excited to introduce Stephen Geffre, studio lead photographer, as a new addition to their outstanding staff of Minneapolis wedding photographers. As a Minneapolis wedding photographer, Jeffre spends his time capturing the unique feeling of his clients’ wedding, not directing traffic or forcing poses with distant relatives. “Once the formal shots are out of the way, I seek to become invisible. As
06-07-2010 | Industry, Real Estate & Constr …
BluSky Marketing
Stephen George & Partners launch green reference guide
Leading architectural practice, Stephen George & Partners, who have a passionate interest in sustainable architecture, have just launched an easy to use and easy to understand guide on selecting sustainable building materials. The Stephen George & Partners Guide to Building Materials and the Environment is a comprehensive, practical and interactive guide. It was originally intended to help designers consider the environmental implications of commonly (and occasionally not-so-commonly) specified materials.
02-05-2009 | Arts & Culture
WILDE GALLERY
Cartoon - Exhibition by Stephen Andrews
Stephen Andrews was born 1956 in Sarnia, Ontario. He lives and works in Toronto. Cartoon was curated by Doina Popescu, Ryerson Photography Gallery and Research Centre, Ryerson University, Toronto, Canada Cartoon is an animated adaptation of a car commercial and is a companion piece to The Quick and the Dead another animation based on footage of two soldiers in Iraq. Together they provide two very different takes on the current political situation.
Comments about openPR
OpenPR ist the nicest and most clearly laid out PR platform I have seen to this day. The press releases are displayed very nicely and clearly and without any unnecessary frills. The updates are fast and the finished release looks appealing and is clearly legible. Even with 16 years of experience one discovers new things from time to time. Congratulations!
Gabriele Ketterl, Director Marketing & PR, Menads