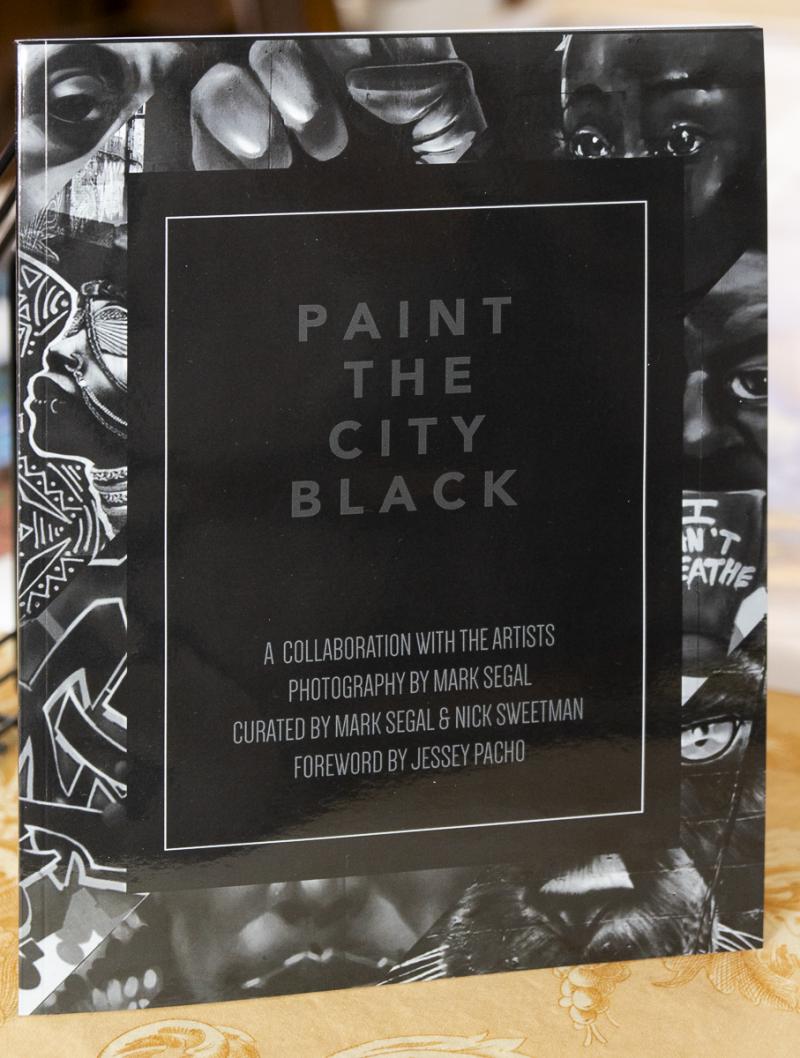 On June 6, one year since Toronto’s Graffiti Alley was transformed for Paint the City Black, Imaging91 and the artists involved are releasing a book documenting this unprecedented event, “Paint the City Black”. This event saw 47 artists painting together in protest against the many incidents of police violence against people of colour that culminated in a worldwide outcry sparked by the murder of George Floyd by Derek C. on May 25, 2020. 100% of the profits of the book’s sale will be donated to Nia Centre for the Arts, a non-profit that supports emerging black artists of all disciplines.“This may be the first time that so many artists congregated in Toronto and painted for a specific cause… Given the historical and ephemeral nature of this mural art, I considered it important to photograph these paintings so that they are preserved for a long time,”, states Mark Segal, photographer, and Founder of Imaging91.This book is the most complete published record that exists of the artwork from this ground-breaking, revolutionary event, and is priced affordably to make it accessible to more people. It is an extension and preservation of the artists standing up and speaking out against racist policing through their painting. Segal captured these images just days after their creation, so the book-owners will have the pleasure of retaining this collection of high-quality reproductions as they were originally painted. Since the event, much of this artwork has been lost in the constant turnover of painted murals and graffiti in the alleys. The nature of this place and this art form is that almost nothing will last more than a year or two. Segal shares, “The art in the Alley turns over rather frequently, it gets tagged, and defaced and degraded, and much of this work is painted on construction boards that will one day be removed. This is quality mural art, bearing an important social message. That is why I thought it necessary to make a good photographic record of it.”An artist and organizer of the event, Nick Sweetman played a vital role in ensuring all works are included in the book and the profits go to an important cause. Two other organizers, graffiti writers Sadar and Jessey Phade Pacho, contributed to the book by remixing murals from the event for the cover design and writing an introductory essay that sets the context of the larger movement against anti-black racism and police violence against BIPOC, respectively.With the book, Imaging91 aims to raise funds for the Nia Centre for the Arts to support the next generation of black artists beginning to express themselves. Contributing to this project will help amplify diverse voices, present and future, and the valuable message their artwork contains. It is a small step towards bringing about an essential change around race and law enforcement. Starting on June 6, you can find this limited edition book on the Imaging91 website, and you can sign up on Eventbrite now for the virtual book release party in Graffiti Alley, sponsored by Lobby and Prosh Marketing.Press Contacts: Mark Segal 647-295-6130 mgsegal@rogers.comNick Sweetman 647-786-1660 nsweetman@gmail.comImaging91 is a new digital imaging and publication enterprise starting up with this unique book, printed in Canada, featuring socially purposeful Toronto mural art. Imaging 91 aims to publish more books focusing on preserving and propagating Toronto's rich mural arts traditions. It also offers services for archival pigment printing and high-quality scanning of film media. Head to www.Imaging91.com for more information.

04-20-2022 | Advertising, Media Consulting, …
Prosh Marketing
Prosh Marketing Hires New Senior Marketing Consultant, Prosh Marketing's team gr …
Today, Prosh Marketing announced the hire of Liv Hunt as Senior Marketing Consultant, to assist the fractional marketing leadership company advance their startup, small and medium-sized business clients. As a forward-thinking marketer who has proven results in scaling organizational performance within both B2B and B2C sectors, Liv brings more than a decade of marketing experience in industries like technology, financial services, real estate and e-commerce. "To help us manage the
11-02-2020 | Advertising, Media Consulting, …
Prosh Marketing
PROSH MARKETING & STARTUPFUEL LAUNCH A CONTEST TO HELP START-UPS GROW
Today, Prosh Marketing, a Marketing company dedicated to helping start-ups grow through measured marketing strategies and proven go to market processes, announced that it is holding a contest to help start-ups on the StartupFuel platform to launch and expand their Marketing programs. During these trying times, we’ve seen many start-ups struggle to obtain financing and as a result, be limited in their ability to grow through Marketing. This contest was developed
06-25-2020 | Business, Economy, Finances, B …
Prosh Marketing
PROSH MARKETING & SMARTER LOANS LAUNCH CONTEST TO CELEBRATE WORLD SME DAY AND SU …
Contest winners to receive more than $5,000 in Marketing Services to fuel business recovery and growth Toronto, Canada, June 25, 2020 – Today, Prosh Marketing, a marketing company dedicated to helping start-ups and small and medium-sized businesses (SMBs) grow through measured marketing strategies, announced that it has partnered with Smarter Loans to launch a contest aimed at helping small and medium-sized businesses better market themselves. Seeing the global pandemic hit small
04-17-2020 | Business, Economy, Finances, B …
Prosh Marketing
Roshni Wijayasinha accepted into Forbes Communications Council
Roshni Wijayasinha, Marketing Consultant, Chief Marketing Officer (CMO) for Startups and Founder of Prosh Marketing, has been accepted into Forbes Communications Council, an invitation-only community for executives in communications, marketing, and public relations. Roshni was vetted and selected by a review committee based on the depth and diversity of her experience. Criteria for acceptance include a track record of successfully impacting business growth metrics, as well as personal and professional