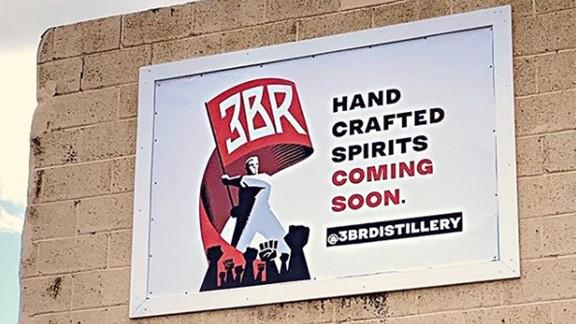 Keyport, NJ – XtractMor would like to announce that its ShockWave Xtractor (Xtractor) technology has been installed at the new 3BR Distillery in Keyport, NJ. Opened in April 2021, 3BR is a producer of craft spirits and features craft cocktails made with the spirits produced on-site and inspired by Russian ingredients. Patrons are taken back in time as they are served in a kitsch Soviet-punk themed tasting room. 3BR uses the Xtractor technology to give their spirits an aged flavor, diminishing or eliminating the need for time in barrels for brown liquors and mellowing the flavor of white liquors.Using the force of cavitation, the Xtractor can significantly accelerate and catalyze liquor aging, allowing flavor transitions that often take years to develop to happen in minutes to days. The Xtractor harnesses the normally destructive power of cavitation so its pressure fluctuations can be used to provide accelerated aging of liquors and spirits. For brown or dark spirits this is accomplished by extracting flavors and color from wood chips entrained in the fluid flowing through the equipment as opposed to traditional static barrel aging. The technology can allow new distillers to sell dark/brown liquors immediately rather than waiting for years of aging. The distiller may also see a drastic yield increase due to not having the evaporative losses typical with barrels. This same action can also be used to extract flavor from fruits, spices and other flavor sources allowing distillers to experiment with new or seasonal flavors and see near immediate results. The Xtractor does all parts of natural aging including the addition of wood flavors and aromas, esterification and oxidation to form or remove compounds and utilize the char to filter unwanted flavors. The mellowing effect can also be seen with cavitation only (no wood or other flavor additions) on clear liquors, wines and even strong beers.Doug Mancosky XtractMor CEO dmancosky@xtractmor.com 8 Redmond Court NW Rome, GA 30165Aleksandr Zhdanov 3BR Distillery Co-CEO and Head Distiller aleks@3brdistillery.com 7 Main St. Keyport, NJ 07735About XtractMorXtractMor is a wholly owned subsidiary of Hydro Dynamics, Inc. (HDI) and the exclusive marketer of HDI’s ShockWave Xtractor (Xtractor) for brewery, winery, and distillery applications. HDI is also located in Rome, Georgia and is the developer and manufacturer of the cavitation based Xtractor technology. The Xtractor uses the physical phenomenon of cavitation and harnesses it to solve critical industrial mixing, extraction and heating problems. The technology can now be found on six continents in applications ranging from biodiesel production to hops extraction for beer. Learn more at: www.xtractmor.com or www.hydrodynamics.com.About 3BR3BR Distillery producer of craft spirits featuring a Soviet-punk tasting room. Experience craft cocktails made with spirits produced on-site in the kitsch tasting room inspired by Russian ingredients. 3BR is located in Keyport, NJ and opened to the public in April 2021. Learn more at: https://www.3brdistillery.com/

08-17-2020 | Sports
XtractMor
XTRACTMOR BECOMES DISC GOLF PRO TOUR PARTNER
(Rome, GA) XtractMor of Rome, GA announced today that it has become an official partner of the Disc Golf Pro Tour (DGPT) to promote its ShockWave Xtractor (Xtractor) cavitation technology for brewery, winery and distillery applications. The Partnership begins this week with Discraft’s Ledgestone Insurance Open from Peoria, IL. The competition will take place from August 13-16th with live coverage on the Disc Golf Network with the
Comments about openPR
9 o'clock: discuss press release with client, 10 o'clock: submit release to openPR, within the briefest possible time release is published and displayed in a prominent place on openPR.de. I am thrilled!
Zehra Spindler, Calypso Now! - Communication Agency