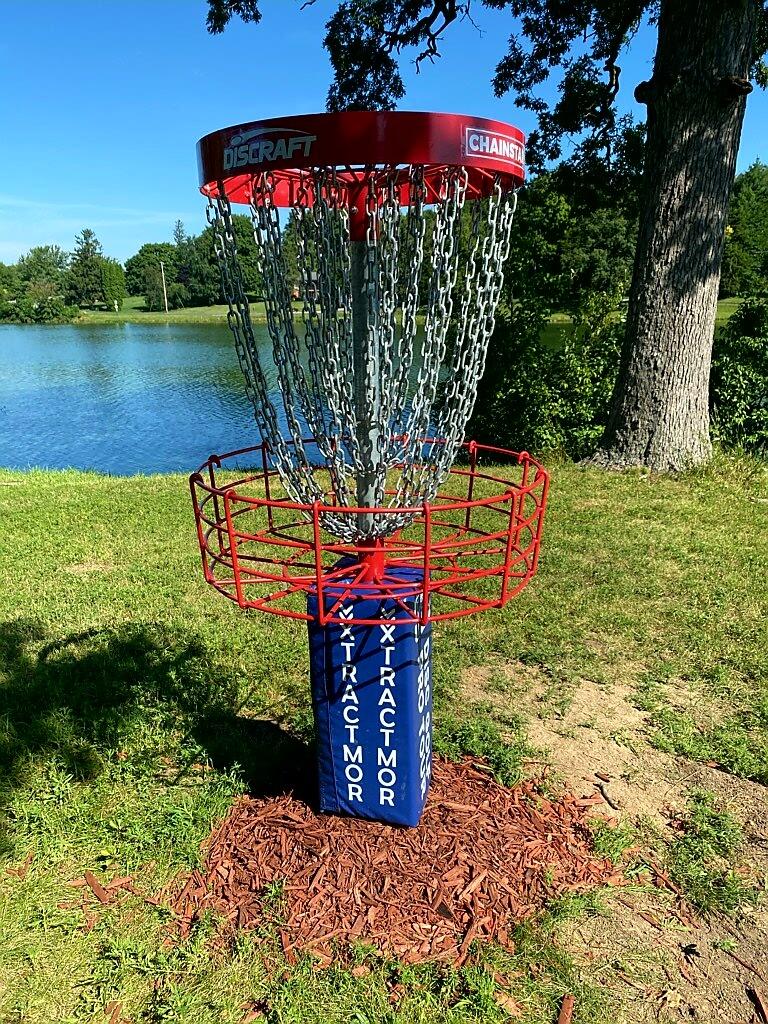 XtractMor logo on hole #14 of the Lake Eureka course. (Courtesy of DGPT)

(Rome, GA) XtractMor of Rome, GA announced today that it has become an official partner of the Disc Golf Pro Tour (DGPT) to promote its ShockWave Xtractor (Xtractor) cavitation technology for brewery, winery and distillery applications. The Partnership begins this week with Discraft’s Ledgestone Insurance Open from Peoria, IL. The competition will take place from August 13-16th with live coverage on the Disc Golf Network with the final round being simulcast on the DGPT YouTube Channel (Sunday, August 16th). The XtractMor logo will be visible on the base of the basket of Hole #14 on the Lake Eureka course during the Saturday & Sunday coverage of the Men’s Professional Division.“There are many connections between the brewing industry and disc golf.” said Doug Mancosky, CEO of XtractMor. “Our device also uses a specialized spinning disc to create cavitation, so the partnership works on many levels. Disc golf is well suited to thrive during Covid-19 and XtractMor’s partnership with the DGPT allows us to be part of an exciting professional sport that’s growing rapidly growing in popularity.”The Xtractor harnesses the pressure fluctuations of cavitation to improve extraction. The Xtractor can allow brewers to produce bitter beers with up to 50% less bittering or dry hops, as well as improve the extraction of fruits, coffee and other flavors. The Xtractor can also increase production through faster dry hopping and increase beer yield by producing less beer-soaked hop waste. For distilleries and wineries, the Xtractor can significantly accelerate and catalyze aging, allowing flavor transitions that often take years to develop to happen in minutes.XtractMor 8 Redmond Ct. NW Rome, GA 30165Doug Mancosky CEO dmancosky@xtractmor.com www.xtractmor.comXtractMor is a wholly owned subsidiary of Hydro Dynamics, Inc. (HDI) and the exclusive marketer of HDI’s ShockWave Xtractor (Xtractor) for brewery, winery and distillery applications. HDI is also located in Rome, Georgia and is the developer and manufacturer of the cavitation based Xtractor technology. The Xtractor uses the physical phenomenon of cavitation, normally known as destructive force, and harnesses it to solve critical industrial mixing, extraction and heating problems. The technology can now be found on five continents in applications ranging from biodiesel production to hops extraction for beer. Learn more at: www.xtractmor.com or www.hydrodynamics.com.

05-25-2021 | Leisure, Entertainment, Miscel …
Hydro Dynamics, Inc.
ShockWave Xtractor Accelerated Aging Technology Installed at 3BR Distillery
Keyport, NJ – XtractMor would like to announce that its ShockWave Xtractor (Xtractor) technology has been installed at the new 3BR Distillery in Keyport, NJ. Opened in April 2021, 3BR is a producer of craft spirits and features craft cocktails made with the spirits produced on-site and inspired by Russian ingredients. Patrons are taken back in time as they are served in a kitsch Soviet-punk themed tasting room.
Comments about openPR
OpenPR is clearly structured and remains true to its principle of confining itself to the essential parts. OpenPR has proven to be a very good and reliable partner to our media agency: Within the shortest time the releases are online and go down well with the media representatives. The success of OpenPR is reflected in the steadily increasing number of press releases. It is good that OpenPR exists!
Ursula Koslik, Director Marketing & PR, F+W Hamburg