George Critchlow Releases New Memoir – The Lifer and the Lawyer 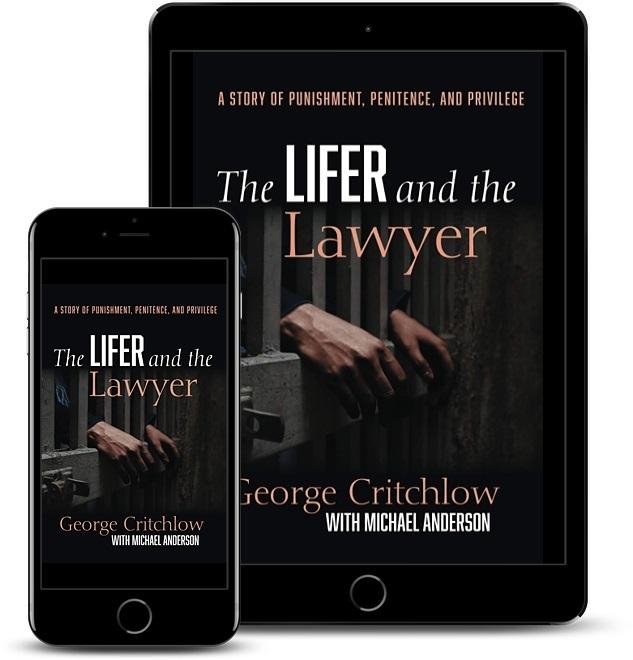 The Lifer and the Lawyer

George Critchlow Releases New Memoir – The Lifer and the LawyerGeorge Critchlow is pleased to announce the release of his new memoir, The Lifer and the Lawyer. The narrative adeptly and unflinchingly raises questions about childhood neglect, unequal opportunity, excessive sentencing, racial bigotry, and the role of faith and reflection in redeeming broken lives. The Lifer and the Lawyer: A Story of Punishment, Penitence, and Privilege is about Michael Anderson, an aging African American man who grew up poor and abused on Chicago’s south side, then came to Eastern Washington, and has now spent the last forty-three years in Washington prisons. The book describes Michael’s early life of trauma and crime, his trial and sentence before a bigoted judge, his moral and spiritual transformation in prison, and a curious friendship that started in 1979 when the author was a young lawyer appointed to represent Anderson on multiple felony charges. Partly about race and white privilege and partly about a criminal justice system that keeps harmless old men in prison, the book also raises larger questions about faith, free will, and what it is that determines our individual destinies. The Lifer and the Lawyer is available for purchase in print and ebook formats. Book Information: The Lifer and the Lawyer A Story of Punishment, Penitence, and Privilege By George Critchlow with Michael Anderson Publisher: Cascade Books Published: December 2020 ISBN: 978-1725278370 (pb) ISBN: 978-1725278363 (hc) ASIN: B08QRY3259 Pages: 210 Genre: Memoir About the Author: George Critchlow is an emeritus professor who taught law at Gonzaga University School of Law in Spokane, Washington for many years. He is also an experienced trial lawyer with civil and criminal experience in state courts, federal courts, and the Supreme Court of the United States.He has taught international human rights law and consulted in Europe, South America, and the Middle East. Critchlow’s interest in fairness, equal opportunity, and civil liberties has been a central part of his professional life. He has now transitioned from a world of legal briefs and law review articles to creative writing that has freed him to say what he wants unconstrained by legal and academic conventions. Contact: Website: https://georgecritchlow.com/ Twitter: http://www.twitter.com/CritchlowGeorge Facebook: https://www.facebook.com/theliferandthelawyer LinkedIn: http://www.linkedin.com/in/georgecritchlow Promo Link: http://bookbuzz.net/blog/memoir-the-lifer-and-the-lawyer-by-george-critchlow-with-michael-anderson/Purchase Links: https://www.amazon.com/Lifer-Lawyer-Punishment-Penitence-Privilege-ebook/dp/B08QRY3259/ https://wipfandstock.com/9781725278370/the-lifer-and-the-lawyer https://www.barnesandnoble.com/w/the-lifer-and-the-lawyer-george-critchlow/1138479977Memoir, Lawyer, George Critchlow, Cascade Books, BookBuzzBookBuzz.net 59 Heritage Way Drive Rome, GA 30165Website: http://bookbuzz.net/blog/memoir-the-lifer-and-the-lawyer-by-george-critchlow-with-michael-anderson/BookBuzz.net helps indie authors, hybrid authors, and small publishers promote and market their books. We also help with book reviews, publicity, and more. Let's Create Some Buzz For Your Book!!!

09-28-2020 | Politics, Law & Society
Maxwell Goss Law
Maxwell Goss Law
Maxwell Goss represents plaintiffs and defendants in all stages of federal and state court litigation and provides strategic advice on intellectual property and business law matters. Max has represented clients in cases throughout the country. Experienced in a broad range of matters, his practices focuses chiefly on intellectual property, non-compete, and shareholder litigation. Max works with businesses of all sizes and with entrepreneurs, doctors, lawyers, engineers, inventors, tech
09-16-2020 | Associations & Organizations
Oberheiden Law - Truck Accident Lawyers
Oberheiden Law Launches Truck Accident Law Firm
DALLAS, TX - September 16 -Oberheiden Law is delighted to announce the expansion of its practice to include wrongful death and personal injury claims from truck accidents. The firm is expanding in response to rapidly increasing personal injury claims and litigation in the recent past. To support this growth, the firm is pleased to announce a new addition to the team of senior attorneys. James S. Bell will be working alongside
06-25-2018 | Business, Economy, Finances, B …
Greco Neyland, PC
Greco Neyland Attorneys at Law
Greco Neyland, PC is a professional team of dedicated criminal defense lawyers that are devoted to fighting criminal charges in both state and federal court. They have successfully defended criminal cases on every level of severity and have won major felony cases in the New York Supreme Court. The lawyers at Greco Neyland are some of the most experienced and knowledgeable attorneys in New York. Greco Neyland is now delighted
02-20-2018 | Business, Economy, Finances, B …
Linguaforum Frankfurt GmbH
Professional translations in banking law
The annual financial statements are just around the corner It is that time again. Banks and credit institutions operating in Germany must submit their annual financial statements to the Federal Financial Supervisory Authority (BaFin) by 31 March at the latest, in accordance with Section 242 (3) of the German Commercial Code (HGB). English-speaking and international banks and corporations are obligated to submit their financial statements in German. “The limits of my language are the
08-28-2017 | Politics, Law & Society
Crowson Law Group
Crowson Law Group
It is commonly said that there is no such thing as minor surgery. Whether it’s getting an appendix removed or having a hip replacement, all surgical procedures are serious; more so if an error occurs during such a surgery. However, is any surgical error considered to be medical malpractice? This article will determine when a surgical error can be said to have reached the level of medical malpractice. It must
01-11-2017 | Business, Economy, Finances, B …
Charles Law
Charles Law Office - Experienced Law firm in the Lehigh Valley
United States 11-1-2017. The Charles Law office is the leading law firm in the Lehigh Valley who takes pride in providing first-class service and support to everyone facing personal injuries. Whether you've suffered from an automobile accident or faced a mass transit accident you deserve some form of compensation. In order to get your voice heard you consider partnering with lawyers who have your best interest at heart. An experienced
Comments about openPR
9 o'clock: discuss press release with client, 10 o'clock: submit release to openPR, within the briefest possible time release is published and displayed in a prominent place on openPR.de. I am thrilled!
Zehra Spindler, Calypso Now! - Communication Agency