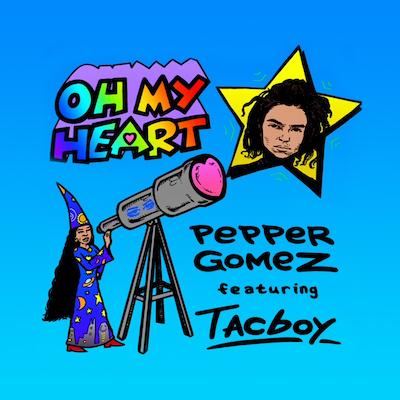 Record label Wake Up! Music announced the release of the Nu House single, “Oh My Heart” featuring and introducing the son of the label founder, producer, and musical artist Pepper Gomez. The young IMG agency male model and vocalist, Tacboy, accompanies his mother on their debut record “Oh My Heart” which will be distributed by ONErpm and be available worldwide beginning on April 30, 2021. When questioned as to what led to this latest EDM family-style collaboration, the multi-talented mom proudly responded, “In a world of instant everything and split second attention spans, timing is still everything! The time is now!”“Oh My Heart”, the first single from the Wake Up! Music mother and son team was born of a remix of Andrew Kitchen's original track, but is really now its own tune (and doesn't even resemble the old tune by Andrew at this time). It was then remixed by Chicago house music DJs Ralphi Rosario, Eric Kupper, Craig J Snider (aka The Shamanic), and mastered by Ted Jensen of Sterling Sound. Tacboy, who along with his brother, Sharkeyes, was born in Chicago, but who now call Broward County, Florida home, were “forced” to study piano and then added drums and guitar lessons that led to performing from an early age. Her sons later united to form the musical group the ET Boys and have developed their own sound which they call Nu Pop Melodic rap. Coincidentally, “Oh My Heart” is also an introduction of Tacboy to the public in preparation for their upcoming release this summer as the ET boys with his brother. While this single will be distributed globally by ONErpm and issued on the Wake Up! Music Records label April 30 to all major digital retailers and streaming platforms on the internet, a North American radio and press campaign have already been launched to promote “Oh My Heart”. Mainstream Rhythmic and Mainstream R&B/Hip-Hop format radio stations have at this time already been serviced with the release, as were a select target of music reviewers and current event reporters. To learn more, go to https://wakeupmusicgroup.com. Interviews and/or appearances will be booked later this month for executive producer Pepper Gomez, along with her son Tacboy. Added news updates and other information about upcoming events may be found at https://www.facebook.com/WakeUpMusicGrp. You may also check out their currently available “Oh My Heart” music video on the Wake Up! Music Records YouTube channel (https://youtu.be/kn_-Uq0MD34). Press kits will be provided upon request to members of the media by contacting the representative listed below.Media Contact: Stevie B Mia Mind Music Phone: 800-843-8575 Email: press@miamindmusic.com254 6th Street, Suite #2, Hoboken, NJ 07030WakeUp! Music Group is a Global Record Label with a team of creatives based in Miami, Chicago, Detroit, United Kingdom, Spain and more. WakeUp! Music Group supports creative NuMusic and Independent Musicians and Artists from around the world.

You can edit or delete your press release Wake Up! Music Announces New EDM Release: “Oh My Heart” here

10-04-2022 | Leisure, Entertainment, Miscel …
Mia Mind Music
Estate Entertainment Releases New Album
The spokesperson for Bayonne, NJ, based Estate Entertainment (www.estateent.com) recently announced that Brooklyn, NY, recording artist, composer, performer, producer, and street poet DESON TENINCHY's latest album titled "First Supper" has been officially released. The record street-dated earlier this month and has already demonstrated the initial signs of impact within the entertainment industry. The week of September 26th, 2022, BDS, DMS, Mediabase, and NACC radio "surveyor adds into rotation" debuts. Estate Entertainment
06-15-2022 | Leisure, Entertainment, Miscel …
Mia Mind Music
Darrell Kelley's "Gun Reform" Is The Tipping Point
Darrell Kelley's "Gun Reform" (released globally on the Viral Records label) takes up this battle cry against the NRA and the seemingly uncontrolled flow of automatic weapons in every corner of this country. Many in America now feel we've reached the tipping point on gun law reform. After the recent massacres of unarmed citizens by armed assassins have been raging across the United States, most now conclude, that enough is
02-04-2022 | Leisure, Entertainment, Miscel …
Mia Mind Music
House Music Legend Robert Owens and Wake Up! Music Announce New Release
Chicago House Music legend Robert Owens along with House Vocalist and Wake Up! Music record label proprietor Pepper Gomez has confirmed the release of "Be Ready" (on the Wake Up! Music record label and distributed globally by ONErpm Distribution) for next Friday, February 11, 2022. Advance copies of the single have already been made available to Mainstream Top 40 and Rhythmic radio broadcasters. Press contacts are currently being serviced with
06-23-2021 | Leisure, Entertainment, Miscel …
Mia Mind Music
"Sober" by ET Boys on Wake Up! Music
House vocalist, Pepper Gomez of Wake Up! Music announces that the much anticipated first release by the new band, the ET Boys, called "Sober" is out June 25, 2021. Pepper notes, "I've been waiting for a Nu Pop act to sign to the Label but little did I know it would come from my own sons." The ET Boys from SoFlo are the brothers Tacboy and Sharkeyes. Sharkeyes creates all the