Vivid Racing Goes Blue with Their Agency Power Wheels on the Porsche 997.2 Turbo 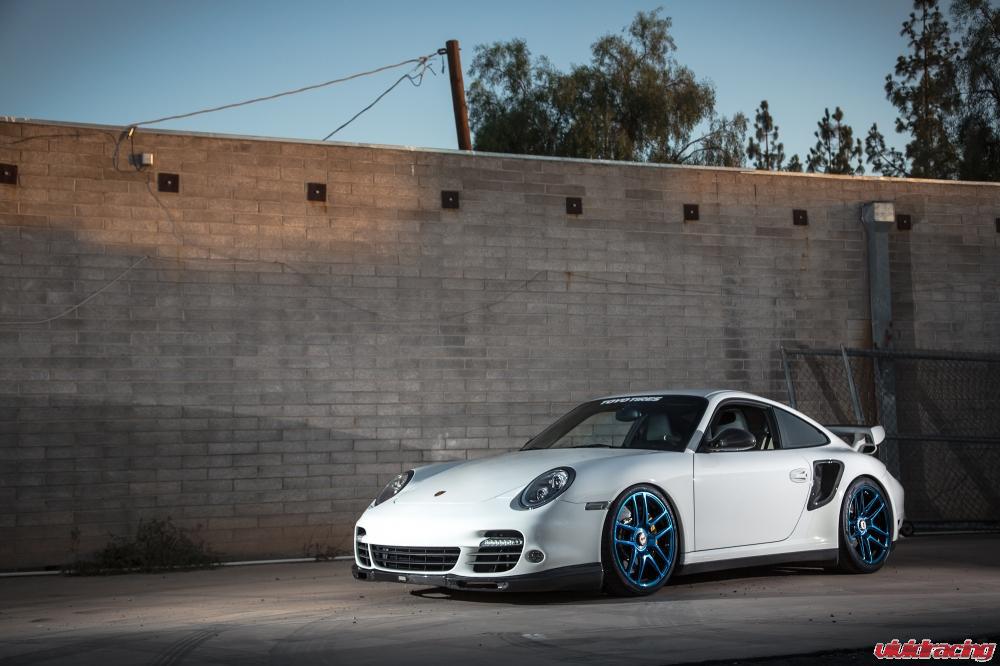 Vivid Racing thought they would turn up the heat on their Project Porsche 997.2 Turbo and have it draw some attention with an updated look. Even though the white body with black wheels and carbon fiber accents looked classy, it needed that extra bling edge that the old Project 997.1 Turbo had with its chrome red lip HRE Wheels. So they took a set of Agency Power Split 5 wheels and custom painted them gloss black with a chrome blue face. Bammmoooo! It’s loud for sure! The 19×8.5 and 19×11 centerlock (also available in 5×130) wheels are a 1-piece forged monoblock. Wrapping the wheels is a brand new set of Toyo Tires Proxes in a 235/35/19 and 305/30/19. To match the Agency Power carbon fiber accessories (front lip, side vents, mirrors) and NR Auto GT2 rear wing, they installed the Agency Power finned carbon fiber diffuser. True blue is always the way to go!Vivid Racing is a multi-million dollar small business in the automotive aftermarket industry. They have been featured in almost every magazine about their business and cars they have built. Rob and Dan have competed in 3 Gumball 3000 events, Bullrun Rally, and featured on ESPN2's "Import Racer" TV show. Vivid Racing has also built several demo cars including some for Pepsi/Mazda and Cusco/Subaru.Betty Mermelstein bjmerm@vividracing.com Dan Mermelstein Vivid Racing 1429 W. Scott Ave. Gilbert, AZ 85233 480 966-3040 x222

You can edit or delete your press release Vivid Racing Goes Blue with Their Agency Power Wheels on the Porsche 997.2 Turbo here

07-17-2012 | Tourism, Cars, Traffic
Vivid Racing
Vivid Racing Reveals Two New Racing Wheels from Volk
Vivid Racing announces that Volk Racing of Japan is bringing more incredible, stylish wheels to their line up. First is their Volk Racing G12 line up for premium sport vehicles. Available in both 19 and 20 inch setups, the elongated 12 spoke design has a double machined matte black finish. With 19′s coming in 8.5 and 9.5 inch widths, this new wheel is perfect with many BMW
06-25-2012 | Tourism, Cars, Traffic
Vivid Racing
Vivid Racing Gives Project Nissan GT-R II New Stance and Power
Vivid Racing recently did a photo shoot to show off their project car, the Nissan GT-R II. First and foremost is the new set of MHT’s Niche SPA 3-piece super concave wheels. The front is a 21×10 with a 285/30/21 Pirelli P-Zero and the rear is a 21×11 with a 305/30/21 Pirelli P-Zero tire. Featuring these custom GT-R center caps, the tinted brushed wheels with gloss black
06-11-2012 | Tourism, Cars, Traffic
Vivid Racing
Project Car Scion FR-S Update from Vivid Racing
Vivid Racing’s new Project Scion FR-S is far ahead of the competition, including the BRZ tuners. First up is the exhaust system. This is one that any enthusiast will truly appreciate. The complete header back exhaust system is designed to be fully modular with the factory exhaust. This factor is for many reasons: performance, state regulations, budget, etc. Each piece can be used with the stock
06-11-2012 | Tourism, Cars, Traffic
Vivid Racing
Vivid Racing Uses VF Engineering to Boost the E90 BMW M3 V8
When you finally get that new car, you immediately start modifying it, spending thousands upon thousands on cool aftermarket parts. Before you know it, $10,000 is gone and though you think adding the intake + exhaust + headers + tune is cumulative in horsepower, it’s not. That’s why if you want big power on your naturally aspirated engine, there is no replacement for…. BOOST!!! Supercharging cars for over 15