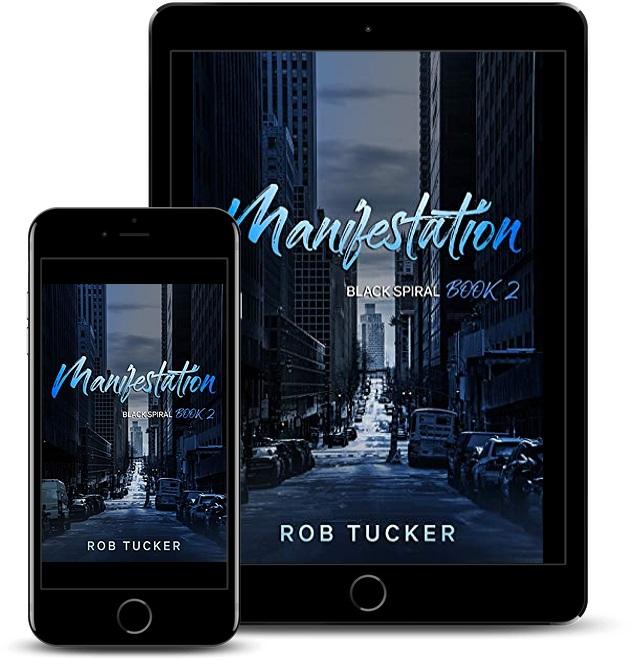 Rob Tucker Releases Second Book In His Black Spiral Paranormal Thriller Series - Manifestation Author Rob Tucker is pleased to announce the release of the second book in his Black Spiral paranormal thriller series, Manifestation. Released by Tell-Tale Publishing Group in March 2021, the book is already receiving rave reviews from readers and reviewers. In Manifestation, Simonetta’s personal mission of sabotage and destruction catches the attention of the FBI and brings Leon Saffulo, a profiler, to the case. When technology cannot explain the phenomenon, he reluctantly works with a retired magician, Maximilian Schultz, who takes him into the simulated individual module (SIM) world, the creation of virtual life from dark energy.Bernadette Garcetti is a Wall Street banker’s executive secretary whose life is mired in distortions of subjective social reality. Through Bernadette’s perceptions and psychological issues, she uses Simonetta as a facet of her imagination and strategically selects her targets according to their social and illegal crimes.Book Information: Manifestation Black Spiral, Book 2 By Rob Tucker Publisher: Tell-Tale Publishing Group Published: March 2021 ISBN: 978-1952020124 ASIN: B0914ZJJDS Pages: 221 Genre: Paranormal Thriller, Urban Fantasy About the Author: Robert Tucker, the author of The Revolutionist, A Season of Sons, and Pulitzer-Nominated Burton Blake, is a graduate of the University of California, Santa Barbara and received his graduate degree in communications from the University of California, Los Angeles. Rob worked as a business and management consultant to advertising, corporate communications, and media production companies as well as many others. Now retired, he resides with his wife in Southern California where he devotes much of his time to writing. He is a recipient of the Samuel Goldwyn and Donald Davis Literary Awards. An affinity for family and the astute observation of generational interaction pervade his novels. His works are literary and genre upmarket fiction that address the nature and importance of personal integrity.Contact: Website: http://www.rmtauthor.com Twitter: https://twitter.com/AuthorR_Tucker Facebook: https://www.facebook.com/rmtauthor/ GoodReads: https://www.goodreads.com/author/show/19556704.Rob_Tucker BookBub: https://www.bookbub.com/authors/rob-tucker Promo Link: https://bookbuzz.net/blog/paranormal-thriller-manifestation/#Manifestation #paranormal #thriller #BlackSpiral #RobTucker #BookBuzzParanormal thriller, urban fantasy, Manifestation, Black Spiral, Rob Tucker, Tell-Tale Publishing Group, BookBuzzBookBuzz.net 59 Heritage Way Drive Rome, GA 30165Website: http://bookbuzz.net/blog/paranormal-thriller-manifestation/BookBuzz.net helps indie authors, hybrid authors, and small publishers promote and market their books. We also help with book reviews, publicity, and more. Let's Create Some Buzz For Your Book!!!

02-25-2019 | Advertising, Media Consulting, …
Aflatoxicosis Treatment Market
Aflatoxicosis Treatment Market- Supportive Care For The Liver Disease, Heart Dis …
The report analyzes and presents an overview of "Aflatoxicosis Treatment Market: Global Industry Analysis 2013-2017 and Opportunity Assessment 2018-2028" worldwide. Aspergillus flavus and Aspergillus parasiticus produce toxic metabolites that are called as mycotoxins. Aflatoxin is produced by the toxigenic strain of A.flavus and A.parasiticus on corn, wheat, peanuts, soybeans, and some other cereals in the field or when under storage. During the storage, high temperature and moisture are apt for the
04-08-2016 | Health & Medicine
Optimal Health Solutions
Optimal Health Solutions invites Manifestation Enthusiasts for a full day Worksh …
Company: Optimal Health Solutions Contact: support@optimalhealthsolutions.ca Website: https://optimalhealthsolutions.ca/quantum-leap-manifestation-workshop/ Address: Quality Resort Bayside, Parksville, BC, Canada V9P 2H5 Telephone No.: 1-855-801-9189 This workshop is presented by Lucy Liu, the founder of Optimal Health Solutions, which will be happening on the 28th of May this year at the Quality Resort Bayside located in Parksville, BC, Canada. The workshop will start at 9 o’clock in the morning until 5 o’clock in the afternoon
10-01-2007 | Arts & Culture
Chris Rabe
2007 Perspectives over the 18th edition of George Enescu International Festival
(by Alexandra Solea/PPS) During the 1st and the 23rd of September, Bucharest was the European capital of music, with the occasion of the 18th edition of “George Enescu” International Festival and Competition 2007. The concerts proposed to the wide public, covered a large stylistic palette beginning with the baroque music until the contemporary tendencies of Romanian and European music. The Festival has reunited the biggest names of the national and international
06-13-2007 | Politics, Law & Society
The Embassy of Uzbekistan in Germany
Yet Another Manifestation of Humanism
13.06.2007 - Andijan, Uzbekistan - On June 12 the consideration of the application of appeal on the case of Gulbakhor Turaeva took place in the city of Andijan. She has been charged on several articles of the Criminal Code of the Republic of Uzbekistan, in particular, the encroachment on the constitutional order of the country, producing or dissemination of materials, which contain the threat to public security and social order,
09-28-2006 | Tourism, Cars, Traffic
Borgo di Lanciano
Ferrari Cars at Borgo di Lanciano, on Sunday 1 Oct.
A Sunday devoted to Ferrari cars at Borgo di Lanciano. The manifestation will start at 9,30 at: after the enrollment and a breakfast at Borgo di Lanciano, these precious cars will start their tour toward Pioraco, Sefro, Monte Lago, Camerino, coming back to Borgo di Lanciano for lunch. In the afternoon the participants will visit the archeological museum, and the company “Confezioni di Matelica ”. Borgo di Lanciano Relais Benessere ph. +39.0737.642844 fax +39.0737.642845 www.borgodilanciano.it Borgo
01-23-2006 | Leisure, Entertainment, Miscel …
Professional Dreamer
New Book Unravels Mystery of Manifestation: A step-by-step Guide to turn dreams …
Vancouver, BC, January 23, 2006 - February 16th-23rd will be officially Professional Dreamer Week, a worldwide celebration to help people utilize the principles outlined in the "Professional Dreamer" book to turn dreams into reality while raising funds for charity. Written by Vancouver author Ghalil, Professional Dreamer is the impetus for the event and provides a step-by-step process for changing your outlook on life and achieving all that you've ever wanted.
Comments about openPR
OpenPR is clearly structured and remains true to its principle of confining itself to the essential parts. OpenPR has proven to be a very good and reliable partner to our media agency: Within the shortest time the releases are online and go down well with the media representatives. The success of OpenPR is reflected in the steadily increasing number of press releases. It is good that OpenPR exists!
Ursula Koslik, Director Marketing & PR, F+W Hamburg