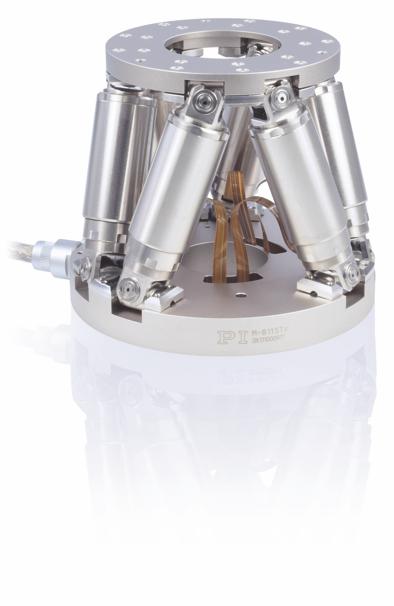 The H-811 miniature Hexapod from PI (Physik Instrumente) has very compact dimensions with a diameter of only 130 mm and a height of 115 mm. In addition to the vacuum version, it is now also available in an air version. The H-811 offers travel ranges of up to 35 mm in the XY level and up to 13 mm in the Z direction. It is especially the large tilting angles of 20 degrees around the X and Y axis and up to 40 degrees around the vertical axis that make this Hexapod so versatile. The miniature Hexapod reliably positions loads of up to 5 kg and achieves velocities of up to 10 mm/s. Each individual strut has a positioning resolution of 40 nm; positioning can be done repeatably with accuracies under 1 µm. The parallel-kinematics 6D positioners are offered as a system including a powerful digital controller and comprehensive software support. There are now two versions available: One in a package with a new compact controller (255 x 226 x 185 mm) that provides the full functionality at a lower system price as well as the Hexapod system with the previous 19-inch rack unit controller, which now offers the control of two further individual servo axes as a standard feature. Additional piezo systems as well as optical or analog inputs can be connected here as an option. The control takes place via TCP/IP Ethernet or serially via an RS-232 interface. All (target) positions are conveniently given in Cartesian coordinates. Box text: Parallel-kinematics systems have several advantages over stacked multi-axis positioners. All six actuators act on a joint platform, which keeps the moved mass low. Moreover, there is no summation of the lateral runout and tilt errors of the individual axes. The pivot point can be selected as desired via software commands and remains independent of the motion.Well-known for the high quality of its products, PI has been one of the leading players in the global market for precision positioning technology for many years. PI has been developing and manufacturing standard and OEM products with piezo or motor drives for 40 years now. With four German factories and ten subsidiaries and sales offices abroad, the PI group is represented internationally.Kathrin Mössinger Marketing Coordinator Marketing & ProductsPhysik Instrumente (PI) GmbH & Co. KG Auf der Roemerstrasse 1 76228 Karlsruhe Germany www.pi.ws Phone + 49 721 48 46 - 1810 Fax + 49 721 48 46 - 1019 k.moessinger@pi.ws