Press release from: The Toybox Charity 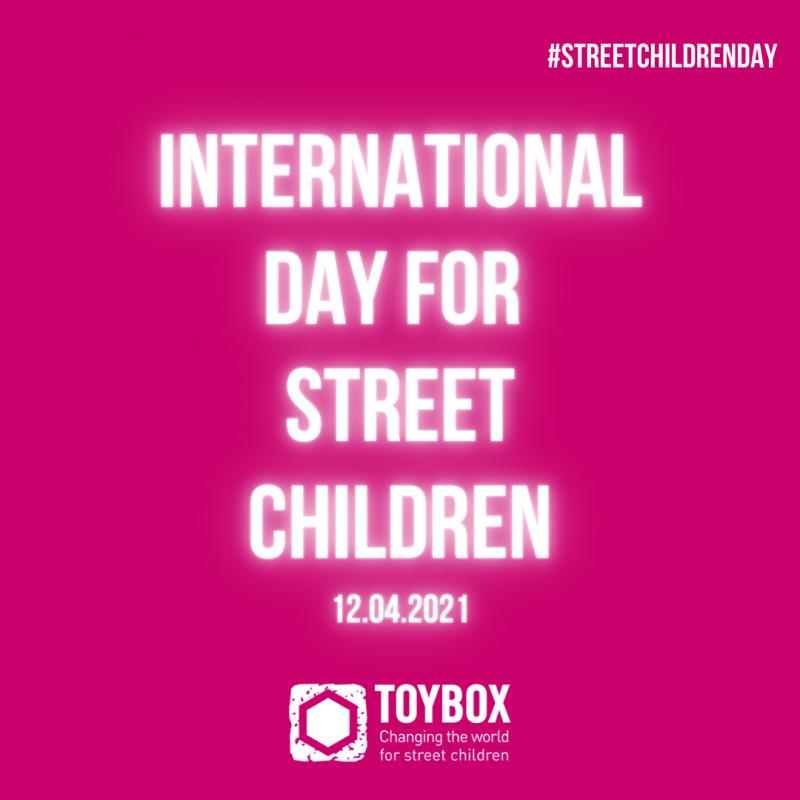 On 12th April we recognise International Day for Street Children.The UN estimates there are hundreds of millions of street children but exact, official figures are virtually non-existent. These children are invisible to the world, living without rights and protection on some of the most dangerous streets in the world.Record levels of inequality, violence, migration, war and the global pandemic means more than ever children are finding themselves forced to live or work on the streets around the world. Street children flee to escape abusive homes, lack of opportunities or end up on the streets after being displaced or trafficked, putting them are at risk of abuse and exploitation on a daily basis. Children of all ages are exposed to stigmatisation, physical and psychological violence. Their future is bleak and their life expectancy terrifyingly low.‘Invisible children’What we do know is that street children are ‘invisible children’ are not counted in a census, they are not registered at birth and cannot access public services, from health to education. So how can these children’s voice be heard?Lynne Morris, CEO at Toybox comments: “If you don’t have your birth registered, it just sets you up to fail. There’s no other way of looking at it. Without having an official identity recorded with your respective government, there’s no access to education, healthcare, employment, or benefits of any kind. You’re not even able to be buried in an official cemetery. For want of another word, you’re invisible, and for a child living on the streets, this is not okay. This is why we began our birth registration projects. They started in Guatemala back in 2014 and since then we’ve expanded our work to reach Nepal, Bolivia and El Salvador. Our team and partners work hard to identify children on the streets who are unregistered and then support them through the legal and administrative process of getting identity documents, not to mention educating the children about their basic rights, including the right to an identity.”Join Toybox this International Day for Street ChildrenMilton Keynes based Toybox is asking for help to shine a light on the challenges faced by street children all around the world, as well as in our home country. No child should be surviving on any street.Toybox is asking landmarks, businesses, community groups and homeowners if you have some special lights, please turn them on in the evening for International Day for Street Children on Monday 12th April 2021, together we can help their voices to be heard.Light up your street for street children this International Day for Street Children tag toyboxcharity in a photo on social media, use the hashtag #streetchildrenday.The Toybox Charity Challenge House Sherwood Drive MK3 6DP gemma.gibbard@toybox.orgAbout Toybox Toybox started working in Guatemala City in 1992, and is still there today, working with children who have been plunged into the chaos of living or working on the streets. From working in one country, with one partner, the organisation is working in seven countries with eight partners. The charity is committed to ending the global injustice of children living and working on the city streets. It helps children marginalised and abused by those who should protect them and works with local organisations who are best placed to help find the most appropriate ways to prevent and help children escape from a life on the streets. Toybox works in El Salvador, Bolivia, Guatemala, India, Nepal, Sierra Leone and Kenya.

More Releases from The Toybox Charity

01-11-2021 | Fashion, Lifestyle, Trends
The Toybox Charity
Virgin London Marathon places available with street children's charity
Have you set yourself a challenge for 2021 to get fit? Started a training program and eating clean? Keep it up and run in the Virgin London Marathon 2021! The ballot for marathon places has now closed, but you could snap up a charity place, released today! Milton Keynes based children’s charity Toybox has 5 places available to runners who would like to sign up to fundraise for their place. Toybox is
10-27-2020 | Leisure, Entertainment, Miscel …
The Toybox Charity
MK charity goes crackers for Christmas
Bletchley based children's charity Toybox is one of 48 charities selected by Advent of Change to be part of their Christmas collection available in John Lewis stores nationwide. Advent of Change, now in its third year was set up to support charities through the sale of ethical Christmas items via John Lewis and Waitrose. The feel-good festive range has been revealed in partnership with John Lewis by the non-profit social

04-30-2020 | IT, New Media & Software
Market Industry Reports
Connected Smart Street Light Market
According to the report, the global connected smart street light market is estimated to account for over US$ 350 Mn by 2019. The market is anticipated to grow at a CAGR of 19.88% from 2019 to 2030. Connected smart street lights can perform multiple functions, such as traffic monitoring, public safety monitoring and auto-dimming based on changes in weather conditions among others. Also, it can measure air pollution levels and notify
10-08-2018 | Health & Medicine
Denmark Street Dental Practice
Denmark Street Dental Practice
Denmark Street Dental Practice provides patients from Gateshead and Newcastle with the opportunity to access high-quality dental treatments such as dental implants, teeth straightening, veneers, teeth whitening, white fillings, cosmetic bonding and more in their dentist in Gateshead. The dental practice offers a professional and relaxed atmosphere and the entire team are trained to listen to patients’ needs and concerns and to provide them with the best possible experience and dental
06-04-2018 | Health & Medicine
High Street Dental
High Street Dental Practice
High Street Dental in Witney provides high-quality, affordable dental care for patients of all ages, focusing on delivering treatment in a welcoming and modern environment. The team of highly skilled, professional and caring practitioners take pride in listening to patient’s needs, bringing a personalised feel to every treatment provided. Established in 1992 by a husband and wife team, Anil Baboolal and Julie Owen, the practice has grown from strength to strength,
10-02-2017 | Advertising, Media Consulting, …
REPORTSANDMARKETS
Street Sweeper Market Research Report 2017-2022
About Street Sweeper Market Summary Street sweeper is designed to sweep roads and control pollution. It is widely used in urban roads, construction plants, airports and seaports. It can be used indoor or outdoor, wet or dry. At first, it was refitted from general automotive and now itâs used as a kind of special automotive. So the main structure of street sweeper is same as general automotive. To request Sample Pages for this
02-24-2016 | Leisure, Entertainment, Miscel …
OXLAEY
Film Release: "Yangon Street Songs" from Myanmar
"Yangon Street Songs" is a brief walk through the streets of Yangon, following and listening to the songs of the street vendors. The film is Creative Commons. "Melodies ring through the streets of Yangon, Myanmar. From female monks giving blessings, to the singing of a street vendor selling sweet drinks, or a bus driver belting out the stops - Yangon hums with music." Press Kit: https://drive.google.com/file/d/0B6CR5YjelTyeajUwV2RGWUhZS0E/view?usp=sharing Yangon Street Songs (2016) Time: 2’13” •
07-26-2011 | Business, Economy, Finances, B …
Gabriel PR
Street Golf Tour Tees-Off in Toronto
Street golf tournament to debut in downtown Toronto, Canada with mini golf course and concert on July 31 at Yonge-Dundas Square. Toronto, ON, July 25, 2011 -- The Grassroots Golf Association (GGA) will feature Toronto’s first Street Golf Tour & Concert at the Yonge-Dundas Square on July 31, 2011. “This is an important initiative for us but more importantly for our youth and the community,” says GGA executive director, Aarold Bennett. “Aside
Comments about openPR
OpenPR is clearly structured and remains true to its principle of confining itself to the essential parts. OpenPR has proven to be a very good and reliable partner to our media agency: Within the shortest time the releases are online and go down well with the media representatives. The success of OpenPR is reflected in the steadily increasing number of press releases. It is good that OpenPR exists!
Ursula Koslik, Director Marketing & PR, F+W Hamburg